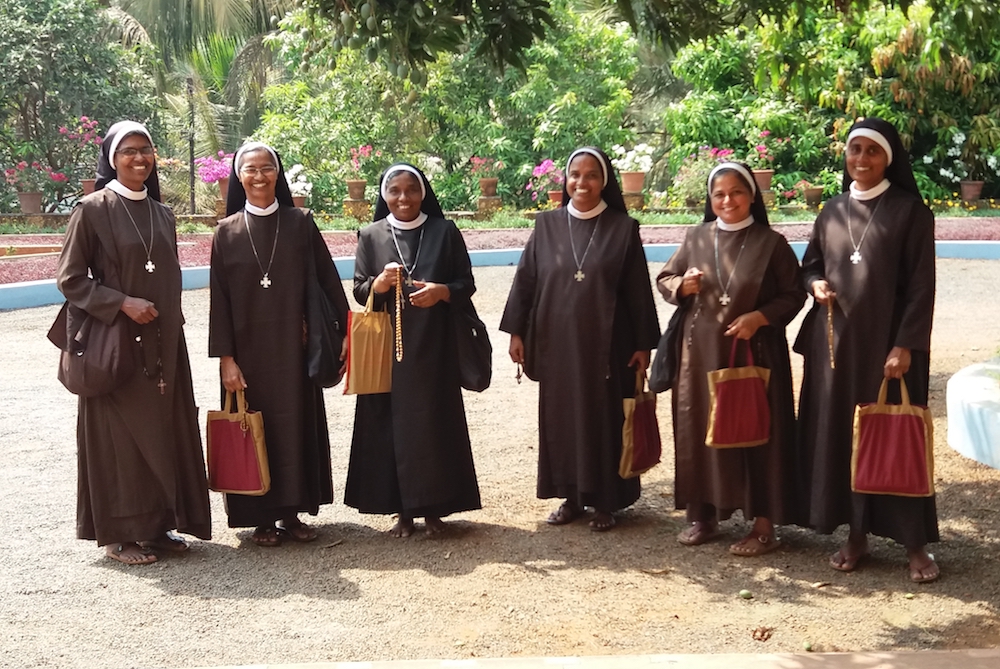 This is an edited version of a story originally published in Global Sisters Report, a project of National Catholic Reporter. The website is http://globalsistersreport.org.

KANNUR, India (CNS) — Meeting with two Catholic nuns who were on a journey to spread the Gospel proved a turning point in the life of Mohan Kumar, a Hindu man in southern India’s Kerala state.

Sisters Little Therese and Treasa Margret of the Congregation of the Mother of Carmel had gone to the 45-year-old alcoholic’s house as part of their Gospel Journey Campaign for spreading Jesus’ message and values to people of different faiths.

A week later, the nuns received a call from Kumar’s wife that her husband had stopped drinking and was acting more loving and kind to the family.

“We thanked God for the miraculous change in Kumar’s life and told the wife that we will continue to pray for her family,” Little Therese, 52, told Global Sisters Report.

For nearly two years, the Carmelite sisters have been on this journey of what they say is “radiating Gospel values on foot as Jesus did.” They walk with few possessions, expecting to live among people struggling with worldly and spiritual needs, in the pattern of Christ and his disciples.

Until May, the sisters, who go only by one or two given names, will be walking in the northeastern-most Indian state of Arunachal Pradesh. From there they will go to the western Indian state of Maharashtra and one day hope to visit Mideastern and Asian nations.

The two nuns launched the campaign in Ernakulam-Angamaly Archdiocese in early 2018 and visited Kumar, his wife and their two children at their home.

Sister Margret, 44, said they have many stories of alcoholics quitting their addictions to return to normal life, bringing joy to their families.

She recalled Kumar’s wife sharing many family problems during their talks. Her main worry was her husband’s heavy drinking, which consumed all his earnings.

“We tried to convince Kumar about the need for quitting drinking and taking care of his family. With the permission of the family, we also prayed in their house,” Sister Margret said.

The two nuns walk through towns and villages to evangelize, share the Gospel and teach Scripture among the most marginalized people of all religions. They include unorganized agricultural workers, low-wage urban laborers, the unemployed and tribal (Dalit) people in what was formerly India’s lowest caste.

“We walk in pairs and talk to poor and marginalized people,” said Sister Little Therese. They also meet people who hang around in public places or sit in groups at coffee shops and share with them the Gospel and Jesus’ love.

Sister Little Therese said they have not faced any major challenges or obstacles during the campaign, although Hindu extremists opposed to Christianity have become more active in Kerala these days.

“Before we started the campaign, we had decided that, if any challenges or obstacles come our way, we would accept them with joy and go forward with courage,” she said as the other nuns nodded.

The people the nuns visit have only good words for them.

“I felt overwhelmed when the sisters shared the messages from the Bible and gave us a prayer card,” Sanjeev Rajan, 37, an auto-rickshaw driver, told Global Sisters Report.

He said the auto-rickshaw drivers are “very ordinary people” who were moved when the nuns spoke to them and prayed for them and their families.

Sister Little Therese said they follow Jesus’ command to his disciples when he sent them to villages in pairs.

“We carry a bag for keeping some essential things for daily use. We never carry any money or food. We survive with what people give us,” she added.

She said they take a two-day break during the week and spend the time in a nearby convent to pray and meditate and review their work. While traveling, they stay in homes that welcome them and eat what is given to them.

Once they are in a new region, Sister Margret said, they never use public or private transportation to move from one place to another.

“We go everywhere on foot, come rain or shine,” she said, and added, “God has been so gracious and merciful to us. None of us has fallen ill or felt tired of walking.”

Sister Ligy, a former teacher and the oldest of the six nuns, told Global Sisters Report she has a walking problem, “but that hasn’t stopped me from the campaign. I always felt that God is guiding me and giving me strength.”

The nuns make it a point to get the family’s permission before they pray for them.

“Once we visited a Muslim house. The mother insisted that we pray for them since she believes that Allah will listen to the prayers of people with pure hearts,” Sister Therese recalled.

According to their superior general, Sister Sibi, the vision of the campaign is based on the verse from the Gospel of St. Luke, “to give light to those who sit in darkness and in the shadow of death, to guide our feet into the way of peace.”

The congregation’s general council and Cardinal George Alencherry, major archbishop of the Syro-Malabar Church, have approved the campaign.

After the campaign completed its first year in January, Cardinal Alencherry hailed the nuns for doing “amazing work.” He told them that more sisters from other congregations also want to join the campaign.

Archbishop George Njaralakatt of Tellicherry said the nuns on the Gospel campaign are role models for others. He said he prayed that more sisters will follow the six original travelers to reach out to people who have never known Jesus or the Gospel.

Mathew is a journalist based in Bangalore, India. Besides writing for Global Sisters Report, he edits Asia Pacific Ecumenical News and writes for Matters India, a news portal that focuses on religious and social issues.