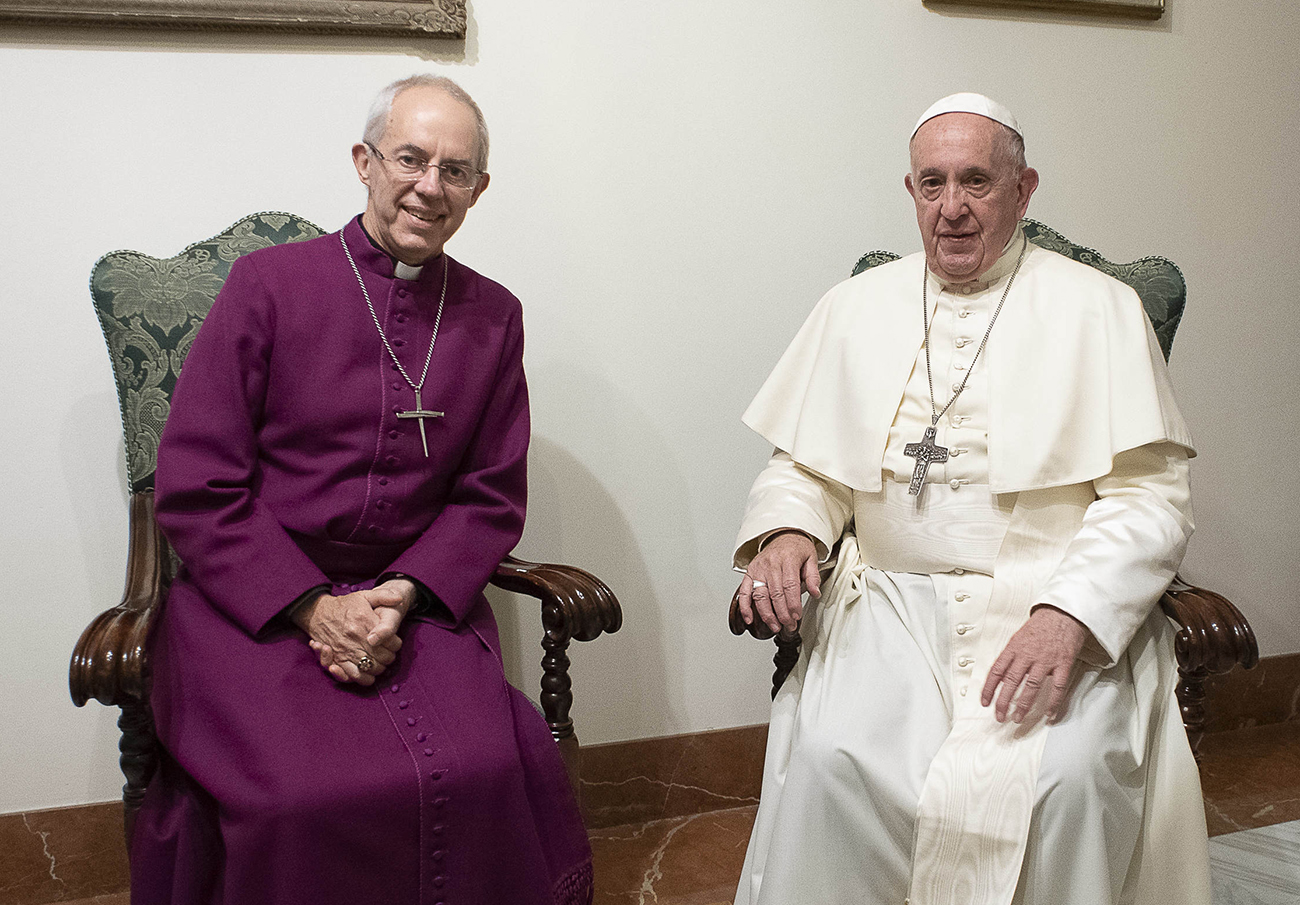 Pope Francis and Anglican Archbishop Justin Welby of Canterbury, leader of the Anglican Communion, meet Nov. 13, 2019, in the pope’s Vatican residence, the Domus Sanctae Marthae. The Vatican press office said the pope and archbishop agreed they would travel together to South Sudan if political leaders there manage to fulfill their promise to form a transitional government of national unity within the next 100 days. (CNS photo/Vatican Media)

VATICAN CITY (CNS) — Pope Francis and Anglican Archbishop Justin Welby of Canterbury, spiritual leader of the Anglican Communion, said they would travel together to South Sudan if the country’s leaders fulfill their promise to form a transitional government by late February.

The pope and Archbishop Welby met at the Vatican Nov. 13 while the Anglican leader was in Rome to install a new director of the city’s Anglican Centre.

“During the friendly discussions, the condition of Christians in the world was mentioned, as well as certain situations of international crisis, particularly the sorrowful situation in South Sudan,” the Vatican press office said in a statement later.

“At the end of the meeting,” the statement continued, “the Holy Father and the archbishop of Canterbury agreed that if the political situation in the country permits the creation of a transitional government of national unity in the coming 100 days, according to the timing set by the recent agreement signed in Entebbe, in Uganda, it is their intention to visit South Sudan together.”

The joint trip to South Sudan has been a hope of both Pope Francis and Archbishop Welby since 2016, when South Sudanese leaders of the Catholic, Anglican and Presbyterian churches visited them to explain the ongoing tensions in South Sudan. They invited the pope and archbishop to visit to bring a message of peace and brotherly love.

Visiting an Anglican church in Rome in February 2017, Pope Francis said he and Archbishop Welby were “thinking about whether it can be done, whether the situation is too difficult down there. But we must do it because they — the three (South Sudanese religious leaders) — together want peace and they are working together for peace.”

As the fighting and political tensions dragged on, Archbishop Welby suggested the squabbling politicians make a spiritual retreat together.

With Pope Francis, Archbishop Welby, South Sudanese President Salva Kiir and four of the nation’s would-be five vice presidents present, the two-day retreat was held at the Vatican in April.

Under the terms of a peace agreement signed in September 2018, the vice presidents were to take office together in the spring, sharing power and ending the armed conflict between clans and among communities. The formation of the government was delayed until Nov. 12, but just five days before the deadline, Kiir and Riek Machar announced a further delay until February.

Disappointed by the delay, Pope Francis made a public appeal Nov. 10 “to all stakeholders in the national political process to seek that which unites and to overcome that which divides in a spirit of true fraternity.”

“The South Sudanese people have suffered too much these past years and are awaiting — with great hope — a better future, especially the permanent end of conflicts and a long-lasting peace,” he said.

NEXT: Pope appeals for dialogue, protecting the vulnerable in Burkina Faso