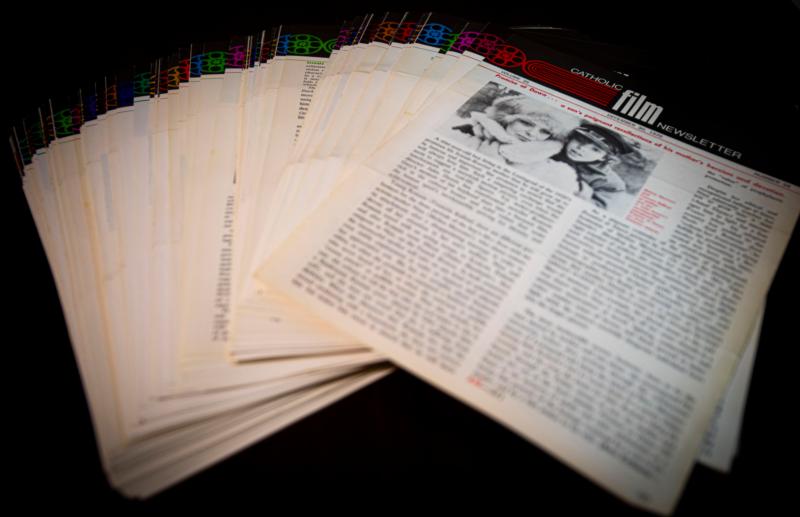 These are newsletters with movie reviews and ratings published by the National Catholic Office for Motion Pictures in the 1960s and 1970s. (CNS photo/Chaz Muth)

NEW YORK (CNS) — Songwriter Bob Dylan wrote his celebrated anthem “The Times They Are a-Changin'” in 1963 and though it was penned as a hymn to the civil rights and anti-war movements of the era, it could also speak to the changing culture reflected in motion pictures.

The movies in the middle of the 20th century began to mirror a society in the United States that was grappling with the sexual revolution, racial tensions and a younger generation increasingly at odds with the authority of the nation’s leaders.

This presented challenges to the U.S. bishops’ Catholic film office — the National Legion of Decency — which up until the 1950s and 1960s had wielded a tremendous amount of power with Hollywood film studio chiefs.

The legion had — in large part — been able to keep the studios from releasing content it deemed morally unacceptable for decades, but the times were indeed changing and so was the public’s idea of what was moral.

Faced with a changing social landscape, as early as the 1950s, the Catholic film office began to give broader consideration to the artistic value of films that depicted topics and used language that might have earned a condemned classification in the past, said Frank Frost.

Frost was a founder of the U.S. membership affiliate of the International Catholic Organization for Cinema, now Signis, and a movie critic for the National Catholic Office for Motion Pictures, known as NCOMP, from 1964 to 1971. NCOMP was the legion’s successor organization.

“In the 1950s, you could see the Legion of Decency losing ground and it had to make some concessions,” said Bernard F. Dick, a renowned film scholar and author who worked as a movie reviewer for NCOMP from 1967 to 1981.

“I don’t think they quite knew what to do with ‘A Streetcar Named Desire,'” Dick told Catholic News Service during an August interview at his home in Teaneck, New Jersey, referring to the 1951 film adapted from Tennessee Williams’ Pulitzer Prize-winning play. “They realized it was too important a work to give it a ‘C (Condemned) rating.'”

In 1957, Pope Pius XII issued his encyclical “Miranda Prorsus,” which called for a more positive engagement with mass media, and in the years leading up to the Second Vatican Council in the 1960s, there were changes in the Catholic outlook on contemporary society and how life was depicted in motion pictures, said John Mulderig, assistant director for media reviews for CNS.

“That’s what really laid the groundwork for a sense that the legion was too cut and dry in its assessments, too negative in its approach,” Mulderig said. “That a more nuanced and perhaps a more positive engagement with Hollywood needed to prevail.”

There had been a sense from the Catholic laity that the church needed to embrace some of the cultural change happening in the 1960s and the Catholic leadership began to respond to that, said Russell Shaw, a writer with the Catholic press who served from 1969 to 1987 as secretary of public affairs for what was then known as the National Conference of Catholic Bishops and U.S. Catholic Conference.

For an institution that critics frequently say doesn’t move in days, weeks or years — but in centuries — U.S. Catholic leaders made relatively swift changes to how their film office looked at the movies.

The first order of business was to change the name in 1965 from the rather militant sounding National Legion of Decency to the more neutral sounding National Catholic Office for Motion Pictures, Mulderig said.

In addition to assessing the moral content of films, the newly named NCOMP also began to review the movies to evaluate their artistic and cinematic value, something that the Legion of Decency had purposely avoided, he said.

Like the legion, NCOMP published a newsletter with the movie reviews and classifications for its subscribers and CNS continued to offer them to its clients for reprinting in Catholic newspapers and magazines, Mulderig said.

The new approach was led by Jesuit Father Patrick J. Sullivan, who served as the director of NCOMP, and Henry Herx, who reviewed more than 10,000 films before he retired in 1999.

Herx, who had helped establish the Chicago Center for Film Study in 1962, took a different approach as a film critic, and during his time at NCOMP, he reclassified hundreds of films from the days of the legion, which had attempted to purify the cinema, Frost said.

“Henry really set a new standard and he was given the green light by Father Pat Sullivan,” he said. “The transition from the legion to NCOMP was really kind of revolutionary in the Catholic world.”

Some of the classification names were changed too, such as the “C (Condemned) rating” that became the less judgmental sounding “O (Morally Offensive) classification.”

Grittier movies that might have been condemned by the Catholic film office a decade earlier, such as 1966’s “Who’s Afraid of Virginia Woolf?” and 1969’s “Midnight Cowboy,” were given the new classification of A-IV (Adults, with reservations), Frost said.

“These movies were dealing with real-life issues, dilemmas, in a creative and artistic way,” Dick said. “Yes, the language was harsh. Yes, some of the scenes were suggestive, but there was a price to pay for their lifestyle, so, there was a moral to these stories.”

NEXT: Catholicism influenced moviemaking from the early days of film