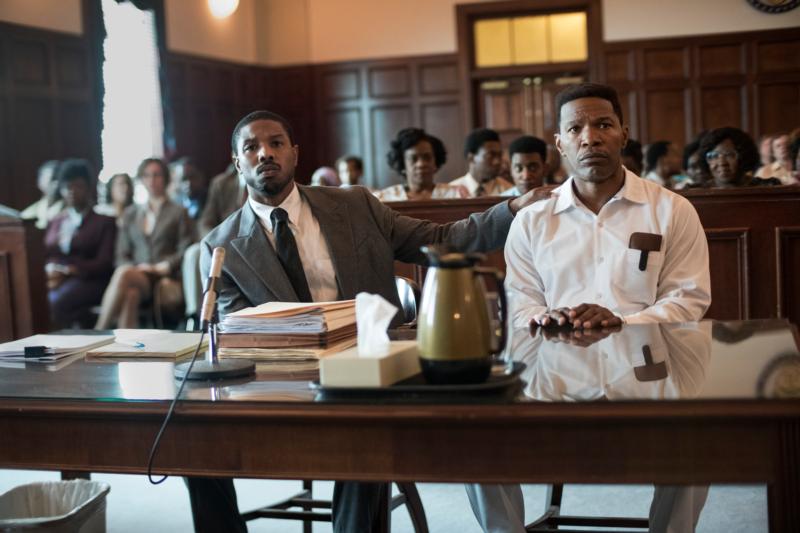 Michael B. Jordan and Jamie Foxx star in a scene from the movie “Just Mercy.” (CNS photo/Warner Bros.)

NEW YORK (CNS) — The legal drama “Just Mercy” (Warner Bros.), director and co-writer Destin Daniel Cretton’s adaptation of the 2014 memoir by Bryan Stevenson, reaches back to events in the 1980s.

But it also succeeds in vividly demonstrating the ongoing dangers posed by the application of the death penalty in a society still burdened by widespread racism.

Rather than pursue a lucrative career, Delaware-bred and Harvard educated Bryan (Michael B. Jordan) moves to Alabama and partners with local activist Eva Ansley (Brie Larson) to establish the Equal Justice Initiative, an organization dedicated to serving the poor, the incarcerated and the condemned.

One case Bryan takes up is that of death-row prisoner Walter “Johnny D.” McMillian (Jamie Foxx).

Convicted in 1987 of the murder of Ronda Morrison, an 18-year-old white woman slain at the dry-cleaning establishment in which she worked, Walter has become understandably cynical by the time he meets Bryan. Yet, quickly recognizing the feebleness of the evidence against Walter, Bryan tries to instill him with renewed hope.

In a crucial gambit to win his client’s confidence, Bryan takes the time to visit with Walter’s wife, Minnie (Karan Kendrick), and their extended family. Convinced that Bryan is indeed different from the uninvolved attorneys by whom he has previously been represented, Walter agrees to let him move forward with the appeals process.

Bryan’s principal strategy involves getting Ralph Myers (Tim Blake Nelson), the key witness against Walter, to admit that he perjured himself. But the case is a potentially explosive one and, with newly installed prosecutor Tommy Chapman (Rafe Spall) resolutely standing by the original verdict obtained by his predecessor, the community backlash turns ugly.

“Just Mercy” proves to be much more than a message movie since Cretton and his script collaborator Andrew Lanham avoid caricature, showing that even some of their most misguided characters are capable of conversion. The result of their broadminded approach is a humane and winning study of a subject with immense real-world significance.

Both as a family discussion starter and a source of education, “Just Mercy” may be deemed acceptable for older adolescents. Whether in theaters or, eventually, on disc, it also represents a valuable potential resource for catechizing adults about the perils of capital punishment.

The film contains mature themes, a disturbing scene of execution, offscreen nudity in a strip search, a couple of mild oaths and a few crude and crass terms. The Catholic News Service classification is A-III — adults. The Motion Picture Association rating is PG-13 — parents strongly cautioned. Some material may be inappropriate for children under 13.

NEXT: ‘Little Women’ elegantly traces journeys, and hearts, of girls