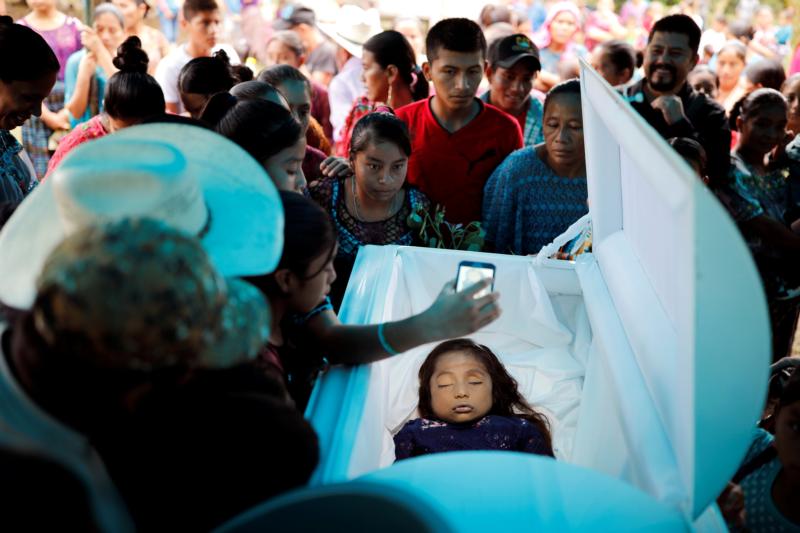 Friends and family gather around the casket of Jakelin Caal Maquin during her funeral and burial Christmas Day 2018 in San Antonio Secortez, Guatemala. She died Dec. 8, 2018, at a hospital in El Paso, Texas, after she was detained along with her father Dec. 6 at a remote border crossing in New Mexico. (CNS photo/Carlos Barria, Reuters)

WASHINGTON (CNS) — Catholics joined faith groups observing the first anniversary of the death of a 7-year-old girl who died under immigration detention in late 2018 and called attention to other children in similar circumstances.

Jakelin Caal Maquin died in December 2018 at the El Paso Children’s Hospital in Texas of a bacterial infection and, at the time, she and her father were under detention by border agents. Some question whether earlier medical intervention would have saved her life.

Catholic organizations and their leaders joined in a statement released Dec. 9 by the Interfaith Immigration Coalition, which is made up of 54 national, faith-based organizations together seeking “just policies that lift up the God-given dignity of every individual.”

“The one-year anniversary of young Jakelin’s tragic death in the Border Patrol’s custody has arrived. Yet, more tragically, we as a nation are no closer to ending this border crisis of hostility and violence,” said said Lawrence E. Couch, director of the National Advocacy Center of the Sisters of the Good Shepherd, in the statement.

“We remember Jakelin and her family and pray for them. We also pray for America and our political leaders,” he said. “This rancor against immigrants and refugees must end. They are not our enemies. We must reclaim our nation’s attention and join together to solve and stop these deaths and detentions before we lose the sense of who we are as a country.”

Sister Aine O’Connor, of the Sisters of Mercy of the Americas Institute Leadership Team, said many have prayed for the little girl and her family during the past year, as well as for other children who have suffered similar deaths.

“We have prayed for her and her family as well as Felipe, Juan, Mariee, Wilmer, Carlos and Darlene, the other children whose lives were lost because of callous actions by our immigration system. Our hearts have been broken by the story of a young life lost by something preventable and at the hands of policies of our country, but the call of our faith remains strong and clear,” she said in the statement. “As Sisters of Mercy, we will continue to pray and remember, and we will work for change because we must do better. We will repeat these stories and their names, so that their lives continue.”

Dominican Sister Quincy Howard, of the Catholic social justice lobby group Network, said their lives had been cut short because of the lack of basic, humane precautions to protect the health of children.

“Such callous and cruel indifference violates basic principles of right and wrong. A child is not a problem to be disposed of or caged; she is a gift from God and must be protected and cherished,” Sister Howard said.

“Our Catholic faith teaches us that we must put the needs of the most vulnerable first. The anniversary of Jakelin’s death and the memory of many other immigrant children lost at our southern border are a reminder that policies that turn away asylum-seekers, separate families, and detain children are a failure of this preferential option for the vulnerable,” he said.

“The Ignatian Solidarity Network continues to work with hope that our political leaders take seriously this call to stand up for those most in need,” Kerr added.

Since the little girl’s death, Catholic organizations as well as other leaders have tried to make sure her death and others don’t go unnoticed.

In the statement, they called attention to the recently reported case involving Carlos Gregorio Hernandez Vasquez, a 16-year-old who also died while under immigration custody. An early December report from the news organization ProPublica said he died in his cell, on the floor, while no immigration authorities rendered help and instead later attempted to cover it up.

Sister Carol Zinn, of the Leadership Conference of Women Religious, said part of Catholics’ life of faith demands that they lend help when others need it.

“We are called by our faith to care for the vulnerable and challenged by our national values to promote the welfare of all children,” said Sister Zinn. “We promise to remember, and we pledge to act. As Catholic sisters, as women of faith, we condemn the Trump administration’s actions to deny admission to asylum-seekers, to hold children in cages, to imprison families, and to use detention and deportation to punish those seeking safety in our country.

“We will continue to walk in solidarity with our sisters and brothers. We will accompany the mothers, fathers, aunts, and uncles who seek justice and we will never forget God’s precious children.”

“When children die of illnesses, we feel helpless and mourn their deaths. But when our government enacts policies that deliberately put immigrant children at risk of sickness and even death, we cannot stand by helplessly,” he said.

“Yes, we mourn the death of little Jakelin on the first anniversary of her death in CBP (Customs and Border Protection) custody, and the deaths of at least five other children in detention,” Carolan said. “But we must also cry out with righteous anger at cruel policies and work to end detention of children and separation from families.”