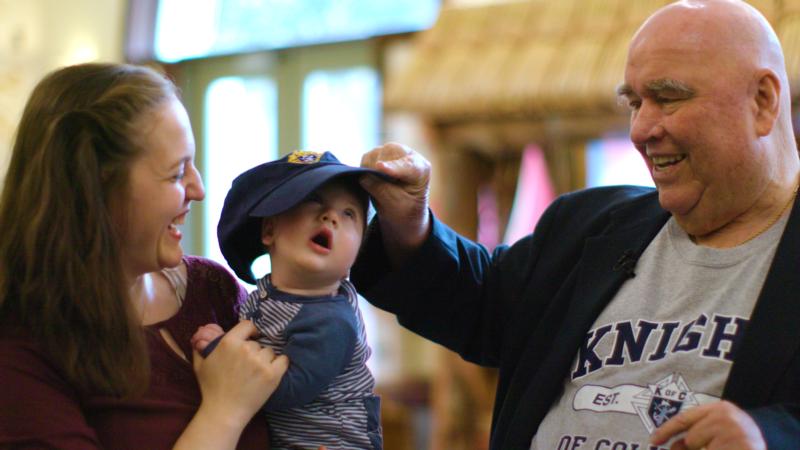 Jim Murray, former general manager for the Philadelphia Eagles and a member of the Knights of Columbus, shares a moment with a family staying at a Ronald McDonald House, a charity he helped found back in 1974. Murray is featured in “Everyday Heroes,” a video series produced by the Knights. (CNS photo/Spirit Juice, courtesy Knights of Columbus)

Jim Murray became the youngest general manager in NFL history without a family connection when he was hired at age 36 by the Philadelphia Eagles in 1974.

Five years before, Murray joined the Eagles’ public relations staff at a time when the team had been struggling for 15 years and hadn’t made the playoffs since 1960.

Under Murray’s guidance, the Eagles clinched playoff berths in four consecutive seasons (1978–1981) and reached the Super Bowl in January 1981.

For Murray, a Knight of Columbus member from De La Salle Council 590 in Aldan, Pennsylvania, reaching the Super Bowl was an incredible feat. But it paled in comparison to what he calls his personal Super Bowl — founding the first Ronald McDonald House in 1974.

His efforts are highlighted as part of the Knights of Columbus video series, “Everyday Heroes,” which tells the stories of ordinary Catholic men acting extraordinarily.

It started when the child of Fred Hill, an Eagles’ tight end, was diagnosed with leukemia. Hill and a friend founded a charity called Eagles Fly for Leukemia. Murray wanted to help, and he began by learning more about leukemia.

At the Children’s Hospital of Philadelphia, he met Dr. Audrey Evans, the head oncologist, and offered donations to help the hospital. What she then said at that meeting changed his life.

“‘You know what else we need? When I tell a family their child has leukemia, I’ve changed their family’s life forever. So I’d like to get a room in a YMCA where they could stay while their child’s being treated,'” Murray recalled.

He replied to the doctor: “You know, you need a house.”

With Murray’s guidance, the first Ronald McDonald House opened its doors on Oct. 15, 1974, not far from where he was born.

“I knew from the first day we opened the house in Philly that this should be duplicated,” Murray said. “The McMiracle, as I call it, happened from there. A couple of years later, there was a second house in Chicago. Today, there are 368 houses all over the globe.”

The Ronald McDonald House now provides families of sick children in more than 64 countries with affordable lodgings and has saved these families an estimated $932.6 million.

“On the wall of the Philadelphia Ronald McDonald House is a map with little pins showing where families have come from to try to save their child’s life and you can’t even see the wall because there are so many different countries represented,” Murray said.

“But it’s not about statistics,” he said. “It comes down to each kid.”

For his charitable work, Murray has received numerous awards including the President Ronald Reagan’s Medal for Volunteers of America (1987), the American Medical Association’s Citizen of the Year award (1999) and Catholic Leadership Institute’s Award for Outstanding Catholic Leadership (2005).

Of course, it has never been about the awards for Murray. It’s about the smiles on the faces of the families and children who enter the Ronald McDonald Houses.

“When a child gets sick, everybody rallies around,” Murray said. “That’s what family is. It’s the ultimate huddle! You all get together and say, ‘What’s our next play?’ … Well, the Ronald McDonald House was my play; it was my Super Bowl.”

NEXT: Catholics urged to pray novena for Archbishop Sheen’s beatification