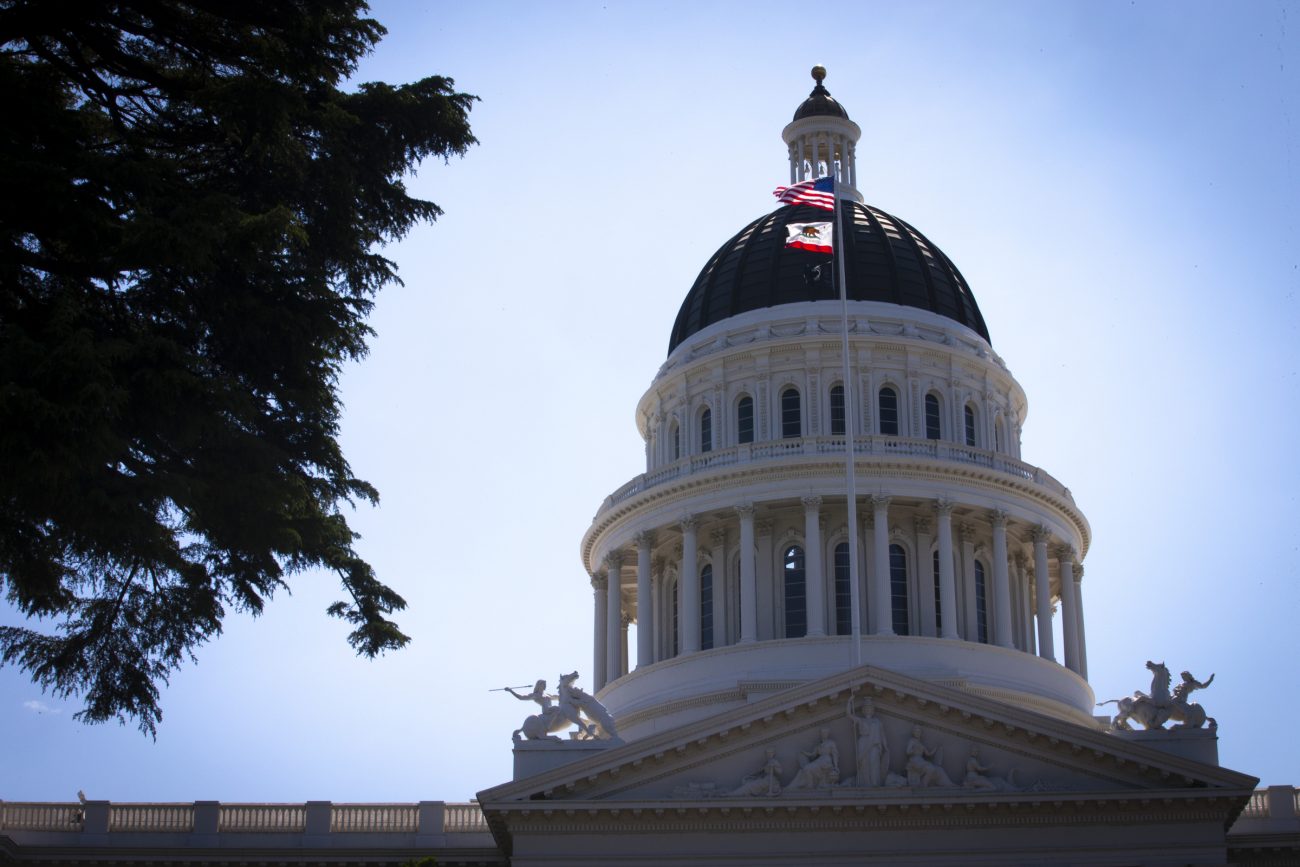 U.S. and California flags fly in front of the dome of the California Capitol in Sacramento May 9, 2019. (CNS photo/Chaz Muth)

The announcement from Jeff Anderson & Associates included plans for the law firm to file suits in the Archdioceses of Los Angeles and San Francisco and the Dioceses of Fresno, Monterey, Orange, San Bernardino, Oakland, San Jose and Santa Rosa.

The firm announced the first lawsuits Dec. 27 in Los Angeles against the Capuchin religious order, St. Francis High School in La Canada Flintridge run by the Capuchins, and the Archdiocese of Los Angeles over alleged abuse by a wrestling coach, Capuchin Father Christopher Kearney.

Two other lawsuits were announced Dec. 27 against Mater Dei High School in Santa Ana and the Diocese of Orange over alleged abuse by former principal Msgr. Michael Harris and Bernie Balsis, a former guidance counselor at the school. The suits were filed on behalf of former students of both high schools alleging abuse decades ago.

In a statement, the Archdiocese of Los Angeles said it had not been served with the suit. The statement added the archdiocese, in 2004, had included Father Kearney on a list of publicly accused priests, following a history of similar accusations against the priest.

The Archdiocese said that it is “committed to transparency and has established reporting and prevention policies and programs to protect minors and support victim-survivors in our parishes, schools and ministries.”

It added, “The archdiocese does not tolerate anyone who does harm to a child or vulnerable person and remains committed to the support and healing of victim-survivors and to ensuring that parishes, schools and ministries are safe places for everyone in our community.”

Regarding the other two suits, a statement from the Diocese of Orange said it is “resolute that it will embrace and give voice to past victims of abuse, irrespective of the dates of abuse, some decades ago. We take any and all allegations of abuse seriously.”

The Archdiocese of Los Angeles and the Diocese of Orange, along with the Dioceses of Fresno, Sacramento, San Bernardino and San Diego, are participating in a newly established independent compensation program in California that is available to any person who has been sexually abused as a minor by diocesan priests, no matter when that abuse might have occurred.

The new extension of the statute of limitations for childhood sex abuse victims was signed into law by California Gov. Gavin Newsom in October. The law allows civil claims of abuse to be filed by victims until age 40, or five years after discovering the damages from the abuse. Previously, claims had to be filed by age 26, or within three years of discovering damages from the abuse.

The new law also opens up on Jan. 1 a three-year window to revive past claims that would have expired under the previous statute of limitations.

McGuire’s name was on a 2018 list of 65 accused Jesuits released by the order’s Midwest Province. Jesuit Father Brian Paulson, the provincial, said at the time, “We are painfully aware that in earlier decades, some Midwest Jesuits were not removed from ministry quickly enough. We are deeply sorrowful.”

Staff members of the Angelus, the online media platform of the Archdiocese of Los Angeles, contributed to this report.

NEXT: Catholic publications join in naming people of the year