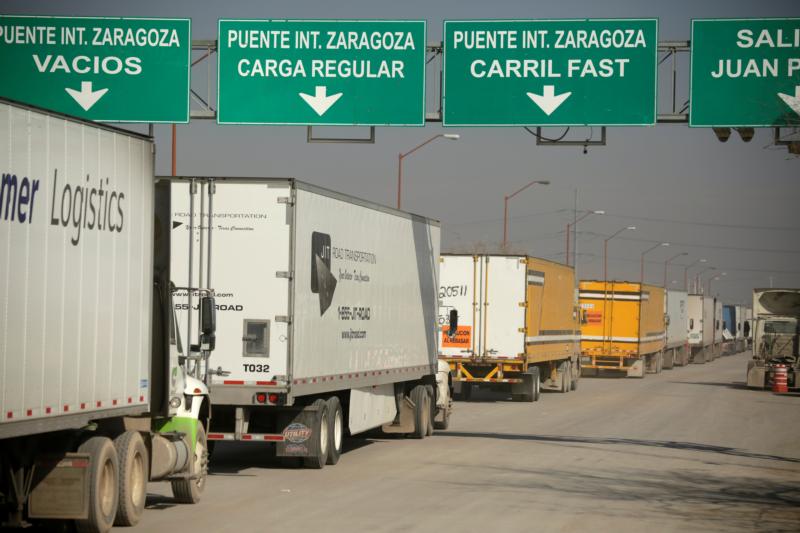 Trucks wait in line for border customs control, to cross into the U.S., at the Zaragoza-Ysleta border crossing bridge in Ciudad Juarez, Mexico, Dec. 12, 2019. The United States, Mexico and Canada called the United States-Mexico-Canada Agreement, or USMCA. It was signed by the three countries last year but underwent revisions. Now the U.S. House and Senate must approve it and then it will go to President Donald Trump for his signature. Mexico ratified the agreement in June, and Canada is expected to do so soon. (CNS photo/Jose Luis Gonzalez, Reuters)

WASHINGTON (CNS) — The U.S.-Mexico-Canada Agreement, a new trade deal unveiled Dec. 10 by President Donald Trump and House Democratic leaders, is no panacea, according to Catholics involved in labor matters, but it is better than the North American Free Trade Agreement it is designed to replace.

What is important, said Clayton Sinyai, executive director of the Catholic Labor Network, is what the USMCA does not contain as much as for what it does include.

In a Dec. 18 phone interview with Catholic News Service, Sinyai acknowledged that “Mexico reformed its labor law, but Mexico has had a more recent history than we have of company-dominated unions.”

He added, “The workers of the AFL-CIO showed solidarity with Mexican workers by saying, ‘It’s not that we want to limit their production or their manufacturing. What we want is for Mexican workers to decide when they want to form a union and to organize.'”

“There’s certainly going to be benefits to the fact that we are no longer going to be in a race for the bottom if workers in all three countries are allowed to organize and advocate for their own benefits,” he added. “It’s not that we won’t benefit for the fact that workers in Mexico are able to organize freely. We believe that the exploitation of workers in Mexico in the maquiladoras hurts American workers as well.”

Joseph A. McCartin, director of the Kalmanovitz Initiative for Labor and the Working Poor at Georgetown University in Washington, took a more sanguine view of the USMCA.

“Organized labor secured improvements on the initial draft of the USMCA agreement, winning the strongest labor protections that have yet been incorporated into an international trade agreement, which is why the AFL-CIO endorsed it,” McCartin said in a Dec. 18 email to CNS.

While it is “apparently the best that could be achieved in the present political environment — I think it was important to some Democratic moderates that they not continue to push for further improvements in the USMCA at this point and the Speaker (of the House, Nancy Pelosi, D-California) knew how far she could push before she couldn’t push anymore,” he added. “Environmentalists are definitely less impressed and leading environmental groups like the Sierra Club oppose the agreement in its current form.”

Late Dec. 19 the U.S. House of Representatives voted 385 to 41 to approve the USMCA. The House now will send it to the Senate, which is expected to ratify it next year.

Initially, Senate Majority Leader Mitch McConnell, R-Kentucky, said the Senate vote would come after that chamber conducts the impeachment trial of President Donald Trump. But after the House voted Dec. 18 to impeach Trump on two counts, it was not clear when the Senate would receive the charges from the House so it can schedule a trial.

“Clearly this half-a-loaf is not an ideal agreement, and it should be renegotiated again should a political environment more congenial to more thoroughgoing reform emerge,” McCartin said, “but it does improve on the stale bread of NAFTA, an agreement that started us off on the wrong foot and then aged badly.”

James Ennis, executive director of Catholic Rural Life, said there were elements in the treaty that aid U.S. farmers, ranchers and growers.

“It helps dairy farmers in a modest way by opening up more markets in Canada. It eliminates tariffs on agricultural products in certain countries, particularly dairy, poultry, eggs. Those are good things that will help rural” communities, Ennis told CNS Dec. 19.

But trade becomes more of a two-way street as well, he noted. “It opens up (U.S.) markets for commodity farmers. It will bring more dairy and peanuts from farmers coming from Canada,” Ennis said.

Ennis also lauded some “built in” environmental clauses in USMCA. “There are some environmental protections that are being added to this agreement that weren’t in the original agreements; they were add-ons. These are now built into the agreement,” he said.

Some estimates place the number of U.S. manufacturing jobs lost to Mexico since NAFTA took effect in 1994 at up to 1 million. A Dec. 16 analysis by Lori Wallach, director of Public Citizen’s Trade Watch, said USMCA “won’t bring back the jobs that we lost,” adding that not all unions are behind the new pact. The Machinists union opposes the USMCA, and the Communications Workers of America are taking a wait-and-see attitude because of the call-center jobs lost to Mexico.

Wallach said the USMCA would also eliminate 95% of the cases of the Investor State Dispute System, a controversial, secret trade court whose rulings could override U.S. laws on everything from pollution to equal pay, with the loser in a dispute potentially on the hook to reimburse the winner’s present and future profits.

Instead, a new court system will be put in place in Mexico to adjudicate trade disputes. Mexico has promised to triple its spending on this, according to Wallach.

Another USMCA provision says that workers making cars in North America — be it the United States, Canada, Mexico, or any combination thereof — must have averaged $16 an hour in pay. The typical U.S. plant pay is $30 an hour; in Mexico, it’s $2 an hour, Wallach said. The U.S. Canadian, and Mexican content of cars assembled in the three USMCA countries will also rise from the current 62.5% minimum.

NEXT: Amid ‘supercharged’ politics, faithful urged to look to good news of Christmas