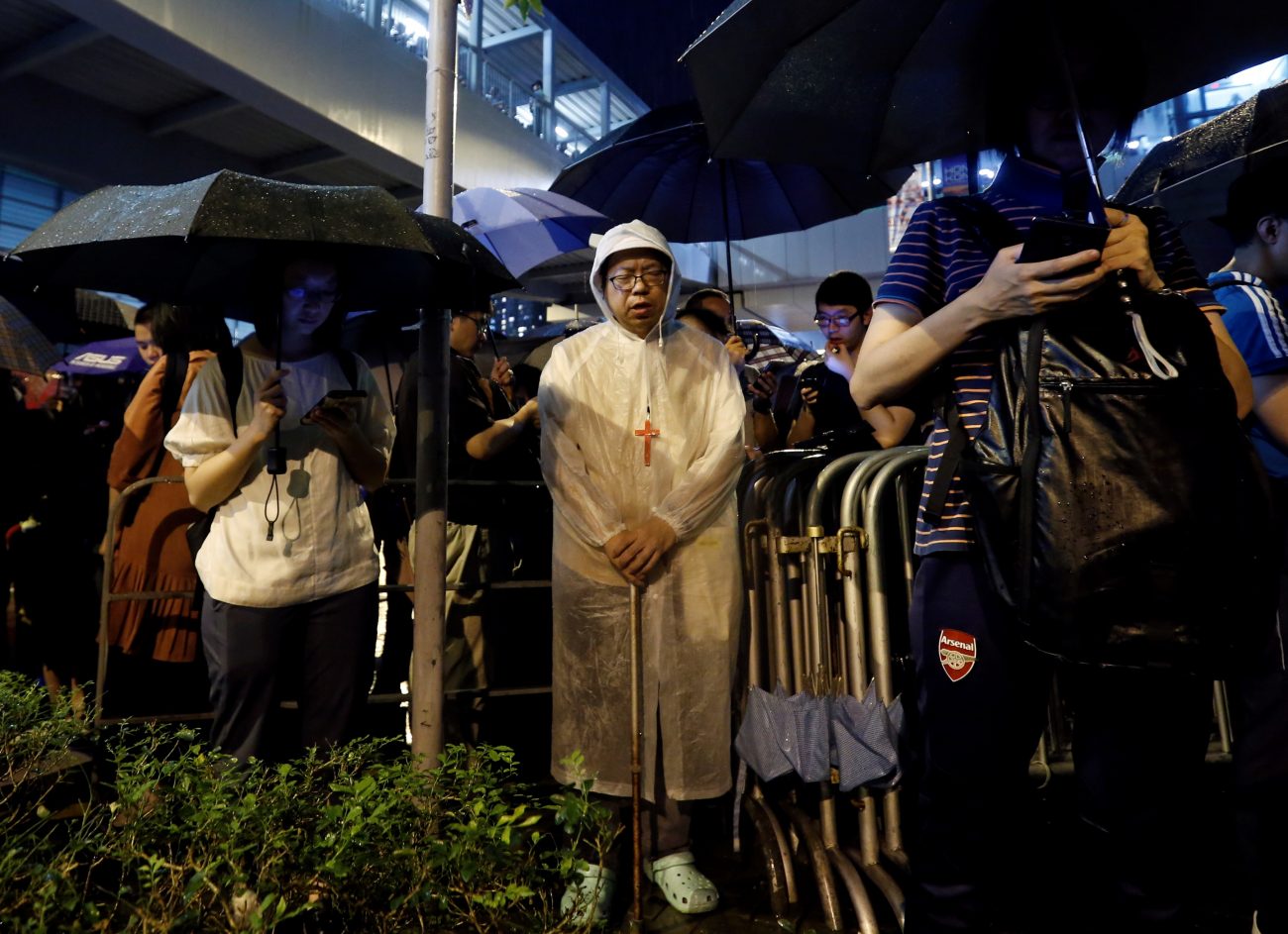 People pray during a Catholic service outside the Legislative Council building in Hong Kong as they protest the extradition bill with China June 11, 2019. The U.S. State Department’s report on international religious freedom, released Dec. 20, 2019, shows continued attacks and abuse by governments and societies against religious minorities in their respective countries such as Burma, China and Iran. (CNS photo/Thomas Peter, Reuters)

WASHINGTON (CNS) — A Catholic member of Congress and the U.S. Commission on International Religious Freedom (USCIRF) welcomed the U.S. Department of State’s redesignation of nine nations as “countries of particular concern” for carrying out or tolerating “systematic, ongoing, egregious violations of religious freedom.”

Rep. Chris Smith, R-New Jersey, said Dec. 20 that Congress had raised concerns about China’s effort to “Sinicize” religion in the world’s largest nation. Actions have included the seizure of Bibles, removal of the “halal” designation from food products, church demolitions, and the removal of loudspeakers and Islamic crescents and domes.

He also cited the need for U.S. officials to pay “special attention” to events in Eritrea as people continue to flee persecution in the East Africa nation.

The USCIRF said the redesignation “sends a strong signal that the U.S. government will not stand for” abuses of religious freedom.

Commission Chairman Tony Perkins Dec. 20 called on the State Department to “ensure strong consequences for the most egregious violators.”

“The CPC-designated countries must know that the United States will not only call them out but also impose costs for violations of this most sacred right,” Perkins said in a statement.

In announcing the redesignations Dec. 20, Secretary of State Mike Pompeo reiterated that the action stresses the U.S. “commitment to protect those who seek to exercise their freedom of religion or belief.”

“We believe that everyone, everywhere, at all times, should have the right to live according to the dictates of their conscience,” Pompeo said in a statement. “We will continue to challenge state and non-state entities that seek to infringe upon those fundamental rights and to ensure they are held to account for their actions.”

The State Department also renewed the placement of Comoros, Russia and Uzbekistan on a special watch list for governments that have practiced or tolerated “severe violations of religious freedom.” In addition, Cuba, Nicaragua, Nigeria and Sudan were added to the list.

Sudan previously was listed as a country of particular concern, but Pompeo said the nation’s civilian transitional government had taken “significant steps” to address the violations of religious freedom under former President Omar al-Bashir, who was ousted by the country’s military in April.

Smith urged the State Department to carefully monitor conditions in Nigeria and “the deteriorating situation under the government of President Muhammadu Buhari.” He said attacks on Christians by Fulani extremists in Nigeria must end.

He raised concerns about the government of Indian Prime Minister Narendra Modi and its growing intolerance of religious minorities, including Christians and Muslims.

At least 23 people have died across India since Dec. 4 in protests against a new citizenship law that permits Hindus, Christians and other religious minorities who are in the country illegally to become citizens if they can show they were persecuted because of their religion in Muslim-majority Bangladesh, Pakistan and Afghanistan. The law does not apply to Muslims.

Critics of the law say it violates India’s secular constitution and that it continues efforts by the Modi government to marginalize 200 million Muslims in the country.

As for Turkey, Smith said that President Recep Tayyip Erdogan “continues to impose unjustifiable restrictions” on the Orthodox Church. He also cited the failure by the Turkish government to allow the Orthodox seminary on Halki Island in the Marmara Sea near Istanbul to be reopened.