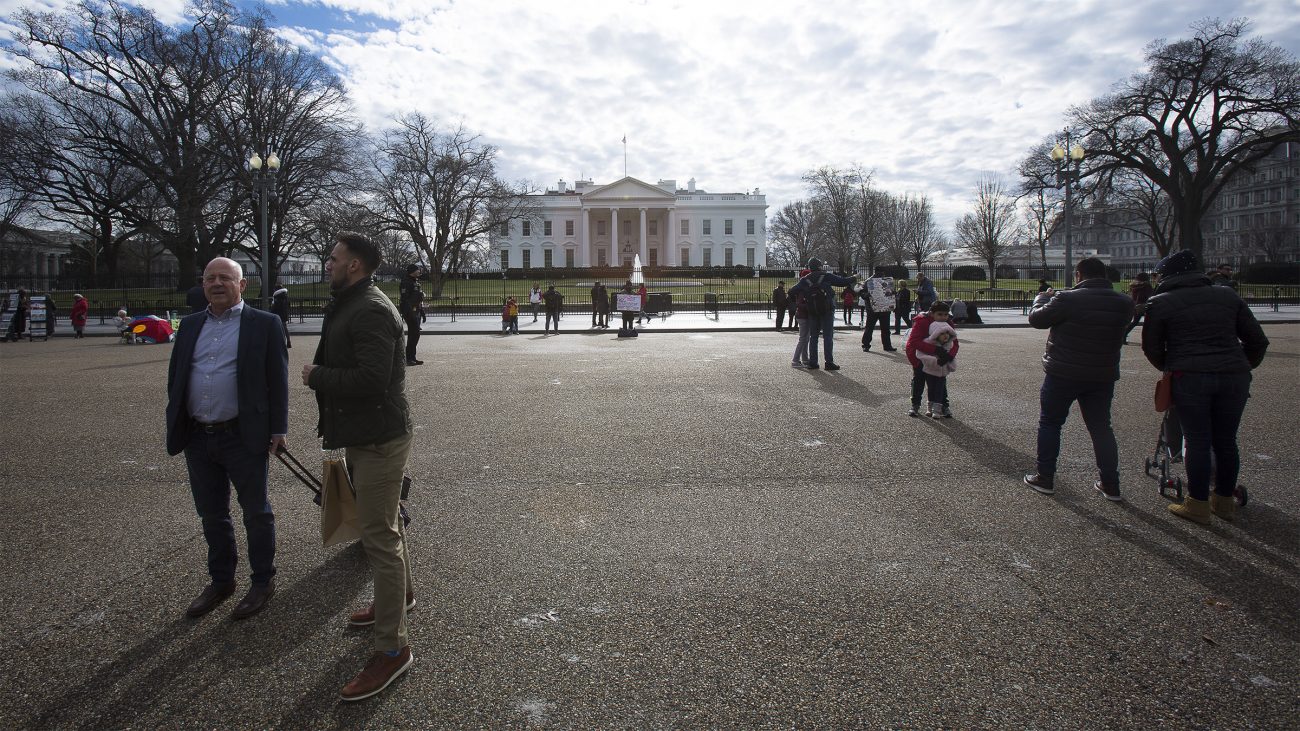 Tourists are seen near the White House in Washington Jan. 8, 2019. The Trump administration announced a new rule Dec. 20 that separates payments for abortion from health care coverage. (CNS photo/Tyler Orsburn)

WASHINGTON (CNS) — The Trump administration Dec. 20 finalized a rule requiring health insurers to send customers a bill for coverage of an elective abortion that is separate from their premium for health care coverage under the Affordable Care Act.

The head of the U.S. bishops’ pro-life committee commended the administration “for enforcing the law.”

“Consumers have a right to know if they are paying for elective abortion,” said Archbishop Joseph F. Naumann of Kansas City, Kansas, chairman of the U.S. Conference of Catholic Bishops’ Committee on Pro-Life Activities.

“While the Affordable Care Act still allows government-subsidized plans to cover abortion, at least with this rule, Americans can now see and try to avoid complicity by choosing plans consistent with their consciences,” he said in a Dec. 23 statement. “I commend the administration for enforcing the law, for its efforts to ensure transparency in health care, and for attempting to respect unborn human life.”

The Exchange Program Integrity Final Rule, as it is called, “finally implements section 1303 of the Affordable Care Act, nearly a decade after it was enacted into law,” said Katie Glenn, government affairs counsel at Americans United for Life.

“Abortion should never be paid for with taxpayer dollars,” she added in a Dec. 20 statement. “This simple and straightforward policy has been codified for decades by the U.S. Congress in the Hyde Amendment, a bipartisan legislative policy prohibiting taxpayer funds being funneled toward abortion.”

One opponent of the rule, Sen. Ron Wyden, D-Oregon, who is the ranking member on the Senate Finance Committee, said: “This rule highlights the incredible lengths Republicans will go to deny access to abortion coverage. … It will create real barriers for women across the country.”

However, as Glenn and other pro-life supporters of the rule pointed out, it implements a provision that was already part of the ACA but has not been enforced since President Barack Obama signed the health care program into law in 2010.

“Congress and President Obama intended that there would be no taxpayer funding for abortion under the insurance exchanges, and this rule fulfills that intent,” Glenn added.

In 2018, Rep. Chris Smith, R-New Jersey, led 102 of his fellow members of Congress in sending an initial letter to the Department of Health and Human Services requesting enforcement of the regulation to make consumers aware of the abortion surcharge.

In early 2019, Smith and Rep. Michael Cloud, R-Texas, co-wrote a letter signed by 50 members of Congress urging HHS to address this “hidden surcharge.” Another letter followed in July from Cloud and Sen. Cindy Hyde-Smith, R-Mississippi, calling for such action; 103 House members and 25 senators signed on to that letter.

In October, Rep. Jeff Duncan, R-South Carolina, sent a final letter to urge enforcement of the separate payments rule leading up to the ACA open enrollment period; 85 members of Congress signed it.

In a Dec. 20 statement, Smith, of New Jersey, who is co-chair of the Bipartisan Congressional Pro-Life Caucus, said: “Consumers are entitled to know whether the plans they are buying subsidize abortion. The Trump administration has chosen to enforce the plain meaning of the law, increasing transparency about which health care plans cover abortion.”

Despite what the law stated, the Obama administration allowed plans “to embed and hide” the abortion surcharge within the monthly premium, Smith said. So this surcharge often remains hidden from consumers, he said, pointing to research available at ObamacareAbortion.com that shows for 2020, 777 ACA exchange plans cover abortion on demand.

The site is a joint project of the Family Research Council and the Charlotte Lozier Institute, the research and education arm of the Susan B. Anthony List.

In his statement, Smith said while the final rule provides “an important transparency measure, it does not change the fact that the ACA violates the long-standing Hyde Amendment by allowing the use of federal funds to pay for plans that cover abortion.”

To remedy what he calls the ACA’s “unprecedented expansion of coverage for abortion on demand,” Smith has sponsored the No Taxpayer Funding for Abortion Act, H.R. 20, to keep taxpayer dollars from paying for abortion or health insurance plans that include abortion. The bill has passed the House four times in previous congresses.

Marjorie Dannenfelser, president of the Susan B. Anthony List, similarly said Obamacare, as the ACA is popularly known, “was the largest expansion of taxpayer-funded abortion since Roe v. Wade. … The Obama administration allowed insurers to ignore the law by burying the abortion surcharge in plan documents instead of collecting it separately.”

The Trump administration’s new final rule “will ensure compliance so that ‘separate’ no longer means ‘together’ when it comes to funding abortion,” she added. “President (Donald) Trump has delivered an important victory for American consumers and taxpayers, the majority of whom oppose using tax dollars to pay for abortions.”

Smith also noted that polling “consistently shows that a majority of Americans — 60%, according to a Marist poll released this year — oppose taxpayer funding of abortion. This rule gives them the ability to choose the health plans that are consistent with their beliefs.”

PREVIOUS: Amid ‘supercharged’ politics, faithful urged to look to good news of Christmas