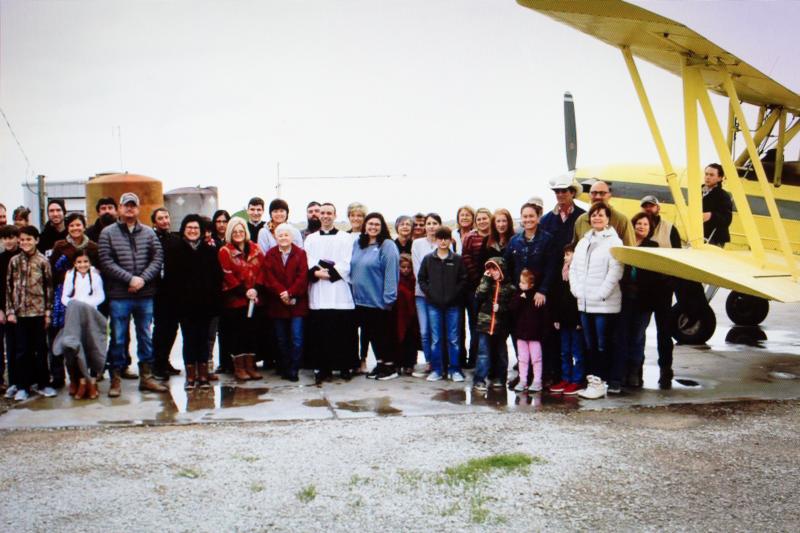 Parishioners of St. Anne Church in Cow Island, La., stand next to the crop duster that had 100 gallons of holy water on it to bless the nearby farms and town. (CNS photo/social media, Diocese of Lafayette)

WASHINGTON (CNS) — Members of St. Anne Parish in Cow Island, Louisiana, gave their neighbors a Christmas blessing from the heavens, so to speak.

Working with a local crop-dusting service, a young parishioner, 70 other parishioners and their pastor, Father Matthew Barzare, coordinated to have holy water sprayed Dec. 21 over the unincorporated community and nearby farms about 30 miles southeast of Lafayette.

About 100 gallons of water, blessed by Father Barzare, were used in giving the spiritual gift to the residents. The parish, a school and other important places in Cow Island received a light spray of water.

“It’s one of those ways to ask God’s blessing upon our community, upon our land. We’re very much tied to our land in Louisiana,” Father Barzare, 32, told Catholic News Service.

The flying service has asked to remain anonymous.

Parishioners in the community in the Diocese of Lafayette provided the water from their homes and other sources and Father Barzare blessed their contributions. Parishioners gathered for Mass first and then participated in a brief prayer service during where the plane and water were blessed before going airborne.

The flight was the idea of parishioner LeRyn Detraz, 23, who now is working with the Damascus Catholic Mission Campus in central Ohio.

“She wanted to bring the community together,” said Father Barzare. “I said let’s roll with it.”

Detraz said the idea to do something for her hometown community came during prayer.

“I was in Ohio and my heart was breaking for our community (in Cow Island). I was carrying a little bit of guilt maybe being a missionary in Ohio and felt I should be doing missionary work in Louisiana,” she said.

The project took a couple of months to organize and the timing of the flight matched the timetable of when priests traditionally bless farmlands in southern Louisiana.

Farmers raise wheat, rice and sugar cane in the growing season and use the land to farm crayfish beginning in the fall around Thanksgiving, Father Barzare said.

After discussing her idea with Father Barzare, Detraz set off to identify a company that would carry out the plan. The company volunteered its time and services for the effort.

Detraz expressed joy that the project was carried out. She said she plans to return to Cow Island when her two years with Damascus is completed in 2021.

Father Barzare said the community wanted to be assured the tanks being used to hold the blessed water were clean of any chemicals used in crop-dusting.

“We trusted the business to decontaminate it,” he said.

The priest does not expect the blessing to be a one-off event, saying, “We want to do it annually.”