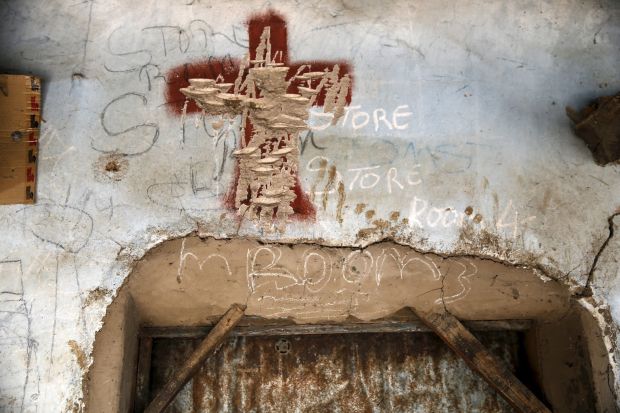 In this May 11, 2015 file photo, a painted cross is seen inscribed above the entrance of a room May 10 in a compound once occupied by Boko Haram in northeastern Nigeria. (CNS photo/Akintunde Akinleye, EPA)

Father Arinse told Catholic News Service that Bulus and her companions were traveling from Maiduguri to her Dec. 31 wedding when they were killed.

“They were beheaded by suspected Boko Haram insurgents at Gwoza on their way to her country home,” he told CNS. He added that Bulus used to be his parishioner at St. Augustine Catholic Church, Maiduguri, after he was first ordained.

Father Arinse said there had been a series of abductions in the area recently. He said government agencies must beef up security in northeast Nigeria to prevent a recurrence.

Several international media outlets reported Dec. 26 that the Islamic State group released a video showing it had beheaded 10 Christians and shot an 11th Dec. 26. The news agencies said they were unable to confirm the contents of the video but described the victims as men. IS said the beheadings were payback for the late-October killing of its leader, Abu Bakr al-Baghadi.

Speaking Dec. 30, he said the government would provide the needed support to enable them to pursue the war against insurgency and other criminal activities in the country.

Buratai praised the troops for their dealings with Islamic State of West Africa Province terrorists, formerly Boko Haram, in the region.

“I am glad to be here with you because this is one of the areas that have been quite strategic in the operation,” he said.

“You have done great, and I want to commend you for standing firm against all the criminals … Do not give them any breathing space. That means you must go out at all times, day and night, whether rain or sunshine, and make sure you deal with them.

“These criminals want to Balkanize our country and we must not allow it,” he said.