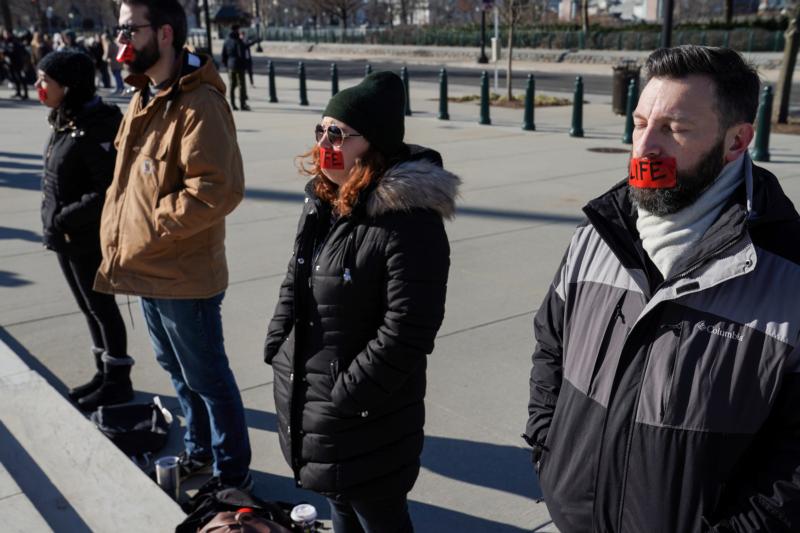 Pro-life advocates stand outside the U.S. Supreme Court in Washington Jan. 22, 2020, the anniversary of the 1973 U.S. Supreme Court decision that legalized abortion across the nation. In a survey of 1,237 adults conducted Jan. 7-12 by the Marist Poll at Marist College under the sponsorship of the Knights of Columbus, respondents said they would welcome limiting abortion so that it can be performed only during the first three months of pregnancy. (CNS photo/Sarah Silbiger, Reuters)

WASHINGTON (CNS) — Seven in 10 American adults support “significant” restrictions on abortion, according to a new poll released in advance of the annual March for Life.

Conducted by the Marist Poll at Marist College under the sponsorship of the Knights of Columbus, the survey of 1,237 adults Jan. 7-12 showed that the respondents would welcome limits on abortions so that it can be performed only during the first three months of pregnancy.

In 2019, the Marist Poll found that respondents favored restrictions by a 75% to 25% margin.

Andrew Walther, vice president for communications and strategic planning for the Knights of Columbus, told reporters during a teleconference Jan. 22 that while the numbers have varied by a few percentage points over the 12 years of the poll, 70% to 80% of respondents have consistently supported abortion restrictions.

The latest poll also found that 55% of respondents identified as “pro-choice” and 40% as pro-life.

Barbara Carvalho, director of Marist Poll, said people who identify as “pro-choice” are not necessarily strongly in favor of unrestricted access to abortion as is widely portrayed in the media and among members in the strongly pro-life and “pro-choice” camps.

“Pro-choice people still are supportive of significant restrictions on abortion to, at most, three months during pregnancy,” Carvalho said.

“When we look at this issue, like many issues that we see in the public debate, it’s one side versus the other side. What is reality, and I think the abortion issue is a very clear example of this, is that Americans have a very nuanced understanding of the issue and want their public policy to reflect that as well,” she said.

This year’s poll also looked at how respondents would weigh individual presidential candidates’ positions on abortion before voting. The poll found that 38% of respondents said it would be a major factor, 36% a minor factor and 25% no factor at all.

A second question asked poll participants about the likelihood of voting for a candidate who wants significant abortion restrictions.

Overall, 65% of respondents said they were likely to vote for a candidate who supported significant restrictions.

Broken down by political leanings, 44% of Democrats in the poll said they would likely vote for a candidate who wants significant restrictions. That contrasts with 88% of Republicans and 62% of independents holding the same view.

In addition, the poll asked respondents about their views on what the U.S. Supreme Court should do if justices decide to revisit the 1973 Roe v. Wade decision that legalized abortion, with 46% saying the decision should revert to the states, down from 49% in 2019.

Thirty-three percent said abortion should be legal without restriction, up from 30% in 2019, while 16% said it should always be illegal, the same percentage as last year.

Other findings in the poll show:

— 55% of respondents favor a ban on abortion after 20 weeks of pregnancy.

— Respondents oppose taxpayer funding of abortion by a 60% to 37% margin.

— A far larger majority — 76% to 21% — oppose the use of tax dollars to pay for abortion in other countries.

— Nearly two in three respondents — 65% — oppose abortion if a child is diagnosed with Down syndrome.

— 52% of respondents support requiring a woman to have an ultrasound at least 24 hours before an abortion.

Carvalho said the margin of error in the data was plus or minus 3.7 percentage points.

Thousands of people are expected for the 47th annual March for Life Jan. 24 in Washington.

NEXT: Supreme Court divided about religious schools in scholarship program