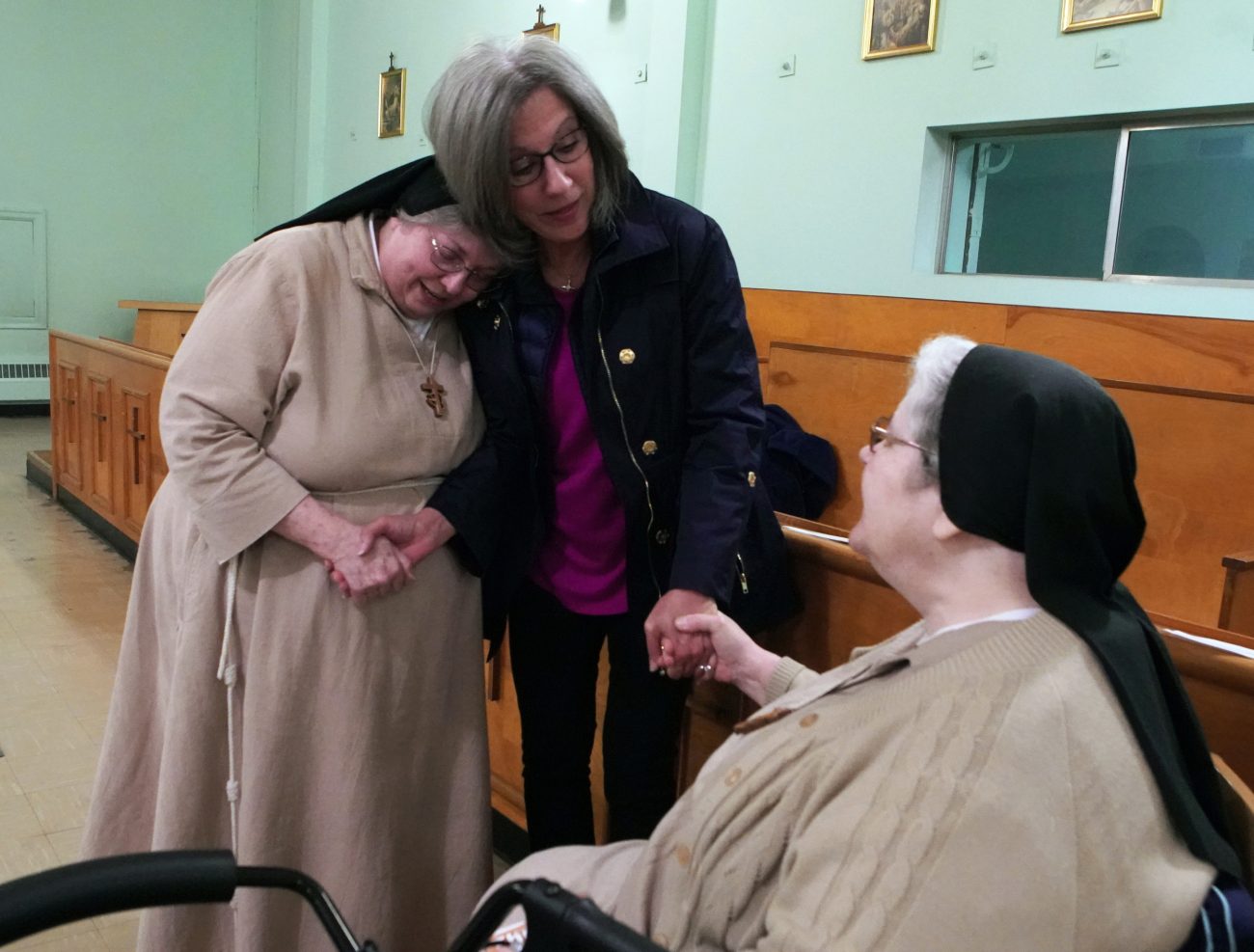 Poor Clare Sisters Claudia and Mary Marguerite say goodbye Nov. 20, 2019, to Kathleen Laakso, a friend of the Monastery of St. Clare in Memphis, Tenn. It closed at the end of the year. (CNS photo/Karen Pulfer Focht)

MEMPHIS, Tenn. (CNS) — As Christmas approached and 2019 came to a close, the Monastery of St. Clare in Tennessee quietly closed.

An 88-year-old priest, Father David Knight, was the last remaining resident. He had hoped to live out his days in his tiny single room with a connecting office where he has written over 40 books.

Few people have been behind the tall brick walls and iron gates of the monastery, which covers nine acres in the Memphis neighborhood of Frayser. A group of nuns there has been quietly praying for the city and its people since 1932.

But now, with only four nuns remaining, the monastery has closed. In May 2018, the Vatican issued guidelines that all contemplative communities, Catholic communities established ostensibly for continuous prayer, need to have at least seven members.

The last four Poor Clares in Memphis sought out ways to continue their vocation, joining other Poor Clare communities around the country.

There are about 20,000 Poor Clares worldwide; officially they are members of the Order of St. Clare.

The order’s Memphis monastery was one of the last contemplative monasteries in Tennessee. Another contemplative order, the Handmaids of the Precious Blood, resides in the Diocese of Knoxville, Tennessee. The order relocated there from Archdiocese of Santa Fe, New Mexico, in 2013.

In Memphis, the silent and prayerful lives of the women at the Monastery of St. Clare remained a mystery and a curiosity to most outsiders. The nuns relied on a loyal group of neighborhood friends for generosity, food, donations and even occasional help around the monastery. The friends asked only for prayer in return.

In a neighborhood plagued by crime and whose residents fight to climb out of poverty, these women chose a life that St. Clare called the “privilege of highest poverty.” They were called to a life of prayer and silence, to live in radical poverty.

Last August, on the feast of St. Clare, the sisters were applauded for all the fruits of their prayers.

Choked up, finding it difficult to get out the words, Sister Marguerite looked into the faces of the wives, husbands, children and elderly that she’d spent a lifetime praying for. “We are leaving,” she said, “but we will continue to pray for you and you will always be in our hearts.” She was unable to say more.

Sisters came in from out of town to help the aging Memphis sisters with the daunting task of unraveling more than 85 years of religious life in the huge monastery, which once housed 30 holy women.

For several months, they worked to pack up the monastery. A sewing room filled with shelves of brown and black material for veils and habits was cleared out. Cabinets filled with candles and other liturgical items were cleaned and the items given away. Statues of saints were taken down from their pedestals.

One critical duty was taking an inventory of over 100 relics the Poor Clares had — matching each relic with the official authentication papers from Rome. The relics, each with a label, included part of the Blessed Virgin Mary’s veil; a piece of the habit of St. Francis of Assisi; the ashes of St. Francis and St. Clare; and even splinters identified as being from the original cross of Jesus, according to tradition and authenticated by the Vatican.

The relics have been transferred to the Memphis Diocese.

As the day approached for Sister Anthony to leave, she answered the door with tears in her eyes, saying, “This is really hard for me, it is a very emotional time.” She grew up here and has deep roots in Memphis; she is one of the Memphis Irish Travelers, a close-knit group. She is the youngest of the nuns and was the last nun to join the Memphis order back in the late 1980s.

On her last day, friends came for a pizza lunch. Danny Robinson,82, hobbled in on his cane; he’s been coming to the monastery since he was a teen. He cherished his last moments with the nuns. They all sang a prayer over him just inside the cloister. Then he and John Lichterman said goodbye. Sister Anthony leaned into Lichterman. He held her and hugged her.

These women had chosen a cloistered life, but their days have been full of visitors, phone calls and emails from people asking for prayers from around the world.

In November, on the Sunday before they were to leave, Sister Marguerite and Sister Claudia, both in their 70s, took Communion, sang and prayed at the monastery’s last Mass. Also attending were those who have worshipped in the public chapel each week, many since they were children.

Father Knight, the oldest priest in the diocese, celebrated the Mass.

Many of the worshipers and the nuns cried, knowing that they’d likely never see each other again. They all had reached the end of the monastery’s life together. “This is a holy place, that has been full of many holy women who have lived here,” Father Knight softly said from the altar.

“The sisters came here to pray for the priests, because they needed it,” the priest added. “Inadequate priests have been with the church from the beginning and we will have them until the end of the world.”

A young boy, Connor Dwyer, moved between the nuns and hugged the nuns over and over again. He walked out with tears in his eyes. “I am going to really miss you,” he said.

“A bond is very quickly established when you pray for people,” Sister Marguerite said.

On the day Sister Marguerite and Sister Claudia left, Father Knight celebrated Mass at a tiny table in the guest quarters. A handful of people were present. The nuns were in travel clothes, not their habits. Their chapel had been emptied. The tabernacle had been removed.

“This is a type of death, but God is with us all the time he is with us where ever we go,” Father Knight said. “Our happiness is not dependent on anything on this earth,” he added.

In making his own move from the monastery, he had to purge a lifetime of homily notes and spiritual writing.

As hard as it was to get used to the idea of leaving the two tiny rooms that he called home for 45 years, Father Knight has a deep understanding and belief that God is in the hearts of the people and not in this big, old and now empty building.