‘Violence in the name of God is blasphemy,’ USCCB president says 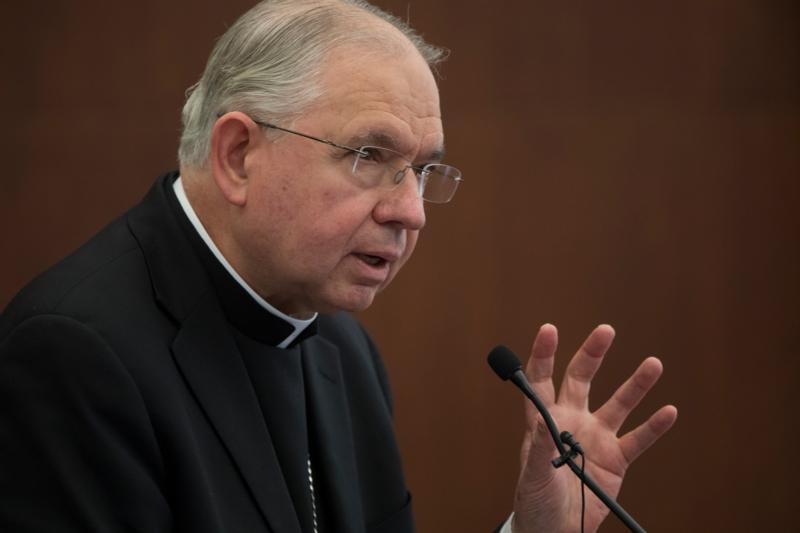 Archbishop Jose H. Gomez of Los Angeles speaks during a lecture at The Catholic University of America in Washington Feb. 6, 2019. In a Dec. 31 statement, the archbishop denounced a global rise in anti-Semitic violence, saying that “protecting religious freedom … should be among the highest priorities of every government.”  (CNS photo/Bob Roller)

LOS ANGELES (CNS) — Decrying the acts of religious violence that have taken place during the Christmas season, the president of the U.S. bishops declared: “Violence in the name of God is blasphemy.”

Archbishop Jose H. Gomez of Los Angeles, chosen in November as president of the U.S. Conference of Catholic Bishops, said: “The rise of anti-Semitic violence in this country and around the world must be condemned along with the ongoing persecution of Christians. Protecting religious freedom and freedom of conscience should be among the highest priorities of every government.”

Archbishop Gomez’s remarks, in a Dec. 31 statement, were prepared with the Jan. 1 observance of the World Day of Peace in mind.

He cited three incidents in particular: the Dec. 29 assault on worshippers in a Texas church by a gunman, which left two congregants and the shooter dead; the Dec. 27 a stabbing rampage during a Hanukkah celebration in a rabbi’s home in New York; and the Dec. 26 posting of a video by an Islamic State affiliate in Nigeria that showed the beheading of 11 Christians.

“In our neighborhoods and communities, violence and cruelty are a sad and ordinary reality of daily life,” Archbishop Gomez said. “Children in our country are killed each day in the womb and many of our neighbors do not have what they need to lead a dignified life. Our politics and cultural discourse are often marked by anger and a merciless and unforgiving contempt for others.”

Despite the Christmas celebration of the birth of Jesus as the Prince Peace, “our world and our lives are far from peaceful,” he added. “So many of our brothers and sisters are living in countries torn by war and injustice, terrorism and persecution; many suffer violence because of race, religion, ideology or nationality. Many of our brothers and sisters, even children, are being bought and sold and living in slavery; millions in our world have no place to call home because of poverty and instability.”

The archbishop added: “Jesus Christ came as a child on Christmas to show us that every person is a child of God, made in his image. He came to show us that all humanity is one family, that we are all brothers and sisters no matter where we are born, the color of our skin or the language that we speak.”

He also noted that on the World Day of Peace, the Catholic Church in the United States joins Pope Francis and the church around the world in praying for peace. “We pray for peace in our hearts and peace in our world. We pray for the conversion of every heart that hates and we pray for the courage to overcome evil with good and respond to hatred with love,” he said

NEXT: March for Life theme links to women’s rights