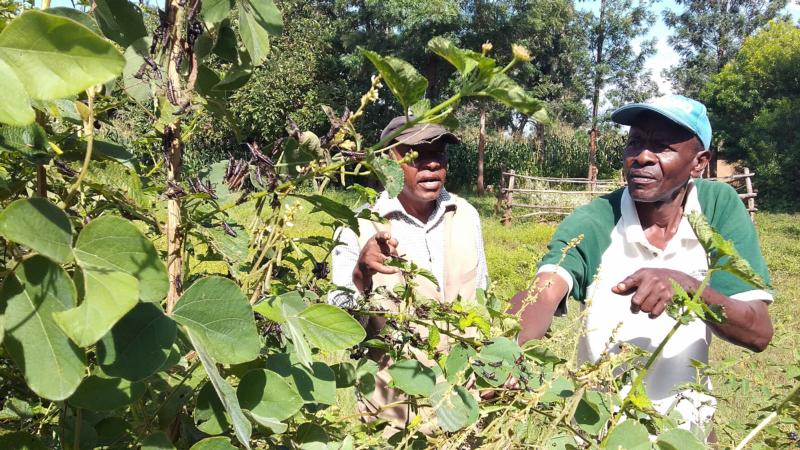 Peter Maganjo and Isaac Ndung'U, farmers in Kirinyaga County in central Kenya, look at a young locust swarm Jan. 13, 2020. Ndung'u said his children had alerted him to the locusts, which had settled on his fence. (CNS photo/Fredrick Nzwili)

NAIROBI, Kenya (CNS) — As swarms of desert locusts continued to advance in Kenya, Catholic leaders urged local communities to use all means possible to fight the herbivorous insects — even cooking them.

Local communities have been beating metal pans, blowing whistles, honking motorcycles and burning cow dung to smoke away the insects, as government help took too long to arrive or became limited, church leaders said. Other Kenyans chanted day and night to scare away the insects.

“We have been encouraging them use anything at their disposal to scare away the locusts. The destructive insects do not like noise. The people are very persistent in creating as much noise as possible,” said Father Isaac Racho, vicar general of Marsabit Diocese. “The swarms that landed here last week have moved away, but after much destruction. We still remain on the alert.”

A large immature swarm that made a landfall in the northeastern county of Mandera Dec. 28 has spread south to several counties. Recently, one immature swarm in northern Kenya had occupied an area measuring 37 miles long by nearly 25 miles wide.

The emergence of the migratory insects has triggered fear among East African farmers, since the locusts threaten food crops and animal pastures.

“I think the government needs to give a clear direction and move with speed to ensure the insects are stopped. A good harvest is anticipated in most parts of the country, and that is now under threat,” Stephen Kituku, the Caritas Kenya director, told Catholic News Service.

In Maralal Diocese, Father Jonathan Namoni, a parish priest in Archers Post, said the insects were still gripping the area and devouring vegetation. 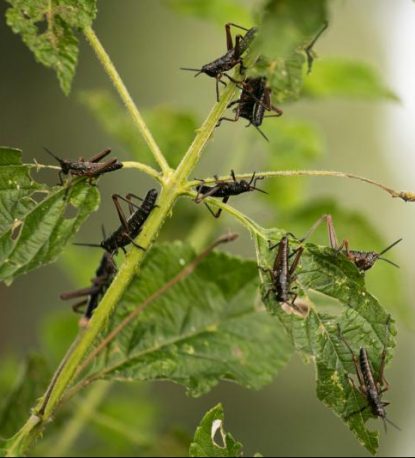 Locust feed on a plant near the village of Riandira in Kirinyaga County, Kenya, Jan. 14, 2020. (CNS photo/Baz Ratner, Reuters)

“Some spraying of the insects is being done, but it’s very frustrating. The insects are breeding and spreading too fast,” said Father Namoni.

The priest warned that the aftermath would be grave, since the insects were destroying pastures in the area where the people are herders.

“It’s urgent and I think there will be problems in the end. Any kind of help to end the threat by the insects is necessary,” said Father Namoni.

Some news reports indicated that a swarm has landed in Kirinyaga area, near Mount Kenya and Laikipia County.

“My children pointed out the insects to me. They had settled on the fence. For me as a farmer, this is very frightening,” said Isaac Ndung’u, a farmer in Kirinyaga County.

Experts anticipate the locusts would reach the Great Rift Valley and Lake Turkana area. Some swarms could move to the Tana River area, while other swarms could reach South Sudan and northern Uganda, according to the U.N. Food and Agriculture Organization.

“In all these areas, there is an unprecedented threat to food security and livelihoods,” the FAO said in a locust update Jan. 13.

Experts say the locusts can destroy large plantations of maize, tea, sugar cane, coffee and vegetables within a few days. The FAO said an average locust can eat food that can feed up to 2,500 people in a year; they can destroy a season of food and ignite a famine.

The latest swarm in Kenya originated in Yemen and first settled in Ethiopia’s Ogaden region in October, then moved into Somalia before spreading into Kenya.

Immature swarms have been reported in eastern Ethiopia, while similar ones are being witnessed in Somalia near the border with Kenya.

NEXT: Pope names bishops for Ukrainian dioceses in England, Australia