Faith is about worshipping God, not oneself, pope says on Epiphany 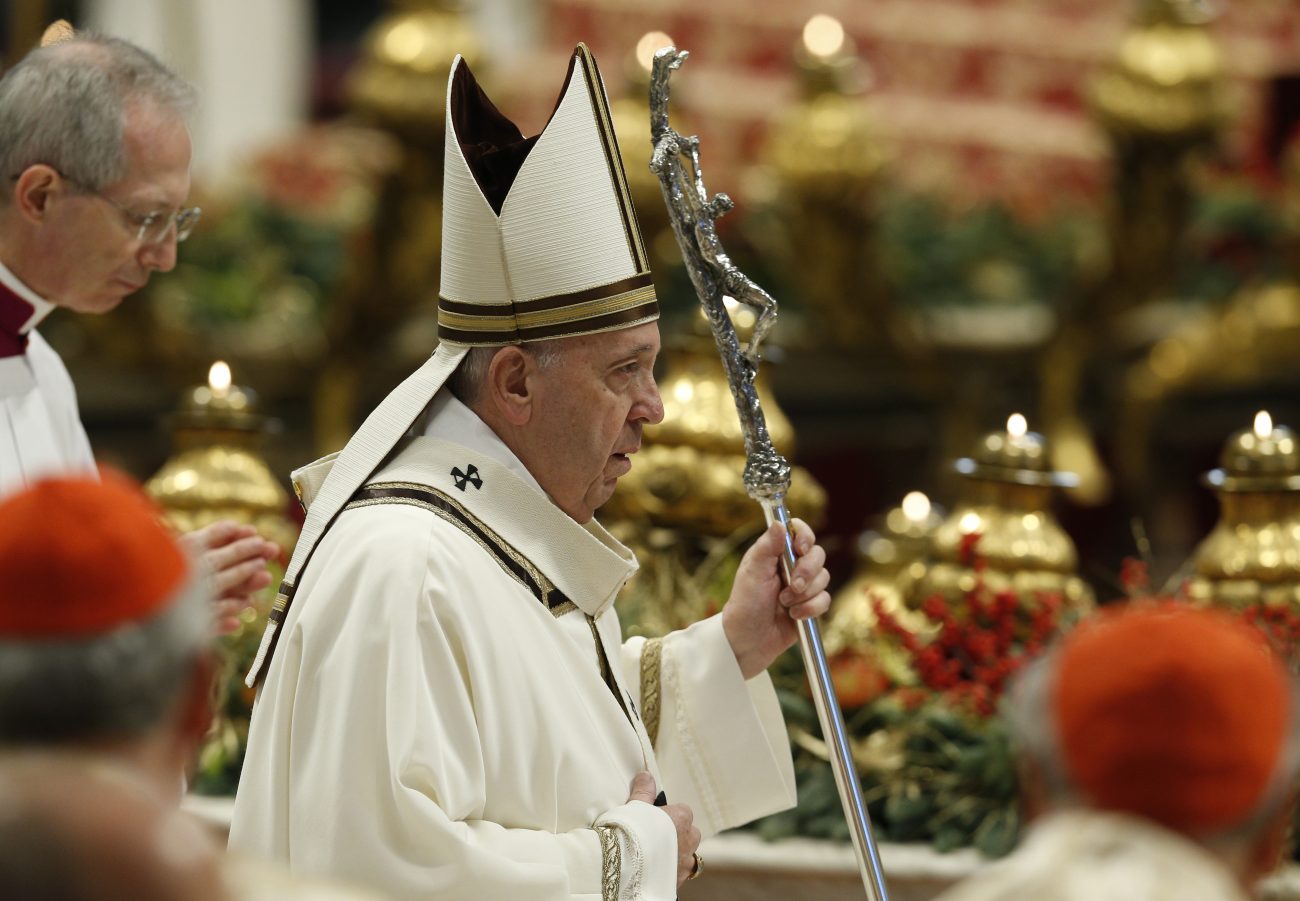 Pope Francis arrives to celebrate Mass marking the feast of the Epiphany in St. Peter’s Basilica at the Vatican Jan. 6, 2020. (CNS photo/Paul Haring)

VATICAN CITY (CNS) — Worshipping the Lord as the Three Kings did involves making a journey “from the greatest form of bondage: slavery to oneself,” Pope Francis said on the feast of the Epiphany.

To worship like the Magi did is “to bring gold to the Lord and to tell him that nothing is more precious than he is. To offer him incense and to tell him that only in union with him can our lives rise up to heaven. To present him with myrrh, balm for the bruised and wounded, and to promise him that we will aid our marginalized and suffering neighbors in whom he himself is present,” the pope said.

In accordance with an ancient tradition, after the proclamation of the Gospel on Epiphany, a deacon chanted the announcement of the date of Easter 2020 (April 12) and the dates of other feasts on the church calendar that are calculated according to the date of Easter.

In St. Peter’s Basilica, as Pope Francis looked on, Deacon Anthony Klein of the Diocese of Sioux Falls, South Dakota, chanted the announcement in Latin. Klein is studying for the priesthood at Rome’s Pontifical North American College.

In his homily at the Mass, the pope focused on the importance of worshipping the Lord, bowing down in adoration of him and putting him before all other concerns, because the Christian life “is a journey toward the Lord, not toward ourselves.”

In the Gospel, he said, Herod worshipped only himself and wanted to rid himself of the child Jesus. “What does this teach us? That when we do not worship God, we end up worshipping ourselves.”

In the Gospel story of the Three Kings, the high priests and scribes know all the prophecies about the birth of the Messiah, yet they do not join the Magi in going to Bethlehem to worship the newborn king, the pope noted.

They offer another lesson to Christians, he said. “In the Christian life, it is not enough to be knowledgeable; unless we step out of ourselves, unless we encounter others and worship, we cannot know God.”

“Theology and pastoral effectiveness mean little or nothing unless we bend the knee, unless we kneel down like the Magi, who were not only knowledgeable about planning a journey, but also capable of setting out and bowing down in worship,” he said.

“Faith is not simply a set of fine doctrines, but a relationship with a living person whom we are called to love,” the pope said. “It is in encountering Jesus face to face that we come to see him as he is.”

“Through worship, we discover that the Christian life is a love story with God,” he said.

At the beginning of a new year, Pope Francis said, Christians should rediscover the importance of kneeling down to worship Jesus, of speaking with him, bringing their lives to him, allowing him to console them.

“Worship means discovering that, in order to pray, it is enough to say: ‘My Lord and my God,’ and to let ourselves be pervaded by his tender love,” the pope said.

“Worship means concentrating on what is essential: ridding ourselves of useless things and addictions that anesthetize the heart and confound the mind,” he said. “In worship, we learn to reject what should not be worshipped: the god of money, the god of consumerism, the god of pleasure, the god of success, the god of self.”

Worshipping God also means “recognizing that we are all brothers and sisters before the mystery of a love that bridges every distance,” he said. “Worship means being silent in the presence of the divine Word and learning to use words that do not wound but console.”

Like the Magi, he said, Christians discover the meaning of their life’s journey in worshipping the Lord and it brings them great joy.

After Mass, with thousands of people gathered in St. Peter’s Square for the Angelus prayer, Pope Francis noted how the Magi did not stay in Bethlehem but returned home “by another way.”

The phrase, he said, can be read symbolically as an affirmation that the Wise Men were changed by their encounter with Jesus and sent back to their normal lives to live in a new way and share their experience.

As with the Three Kings, the pope said, “the experience of God does not block us, but frees us; it does not imprison us, but puts us back on our way, returning us to the usual places of our existence. The places are the same but, after the encounter with Christ, we are not the same as before.”

NEXT: Kenyan Catholic leaders alarmed at increase in terror attacks