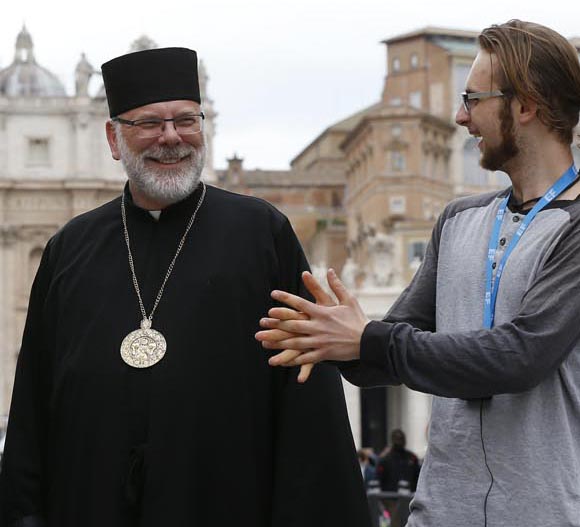 Bishop Kenneth Nowakowski of the Ukrainian Diocese of New Westminster, British Columbia is seen during a March 27, 2017 “ad limina” visits to the Vatican. On Jan. 15, Pope Francis appointed Bishop Nowakowski to lead the Eparchy of the Holy Family of London in Great Britain (CNS photo/Paul Haring)

The Vatican announced Jan. 15 that Pope Francis named Bishop Kenneth Nowakowski of the Canadian Eparchy of New Westminster, British Columbia, to be the new bishop of the Eparchy of the Holy Family of London in Great Britain.

Bishop Nowakowski, 61, had led the Canadian diocese since 2007.

Also Jan. 15, the Vatican said Pope Francis accepted the resignation of 76-year-old Bishop Peter Stasiuk, who had led the Eparchy of Sts. Peter and Paul of Melbourne since early 1993.

Bishop-designate Bychok, who was born in Ternopil, Ukraine, was serving at St. John the Baptist Ukrainian Catholic parish in Newark, New Jersey, at the time of his appointment. He entered the Redemptorist order in 1997 and was ordained to the priesthood in 2005.