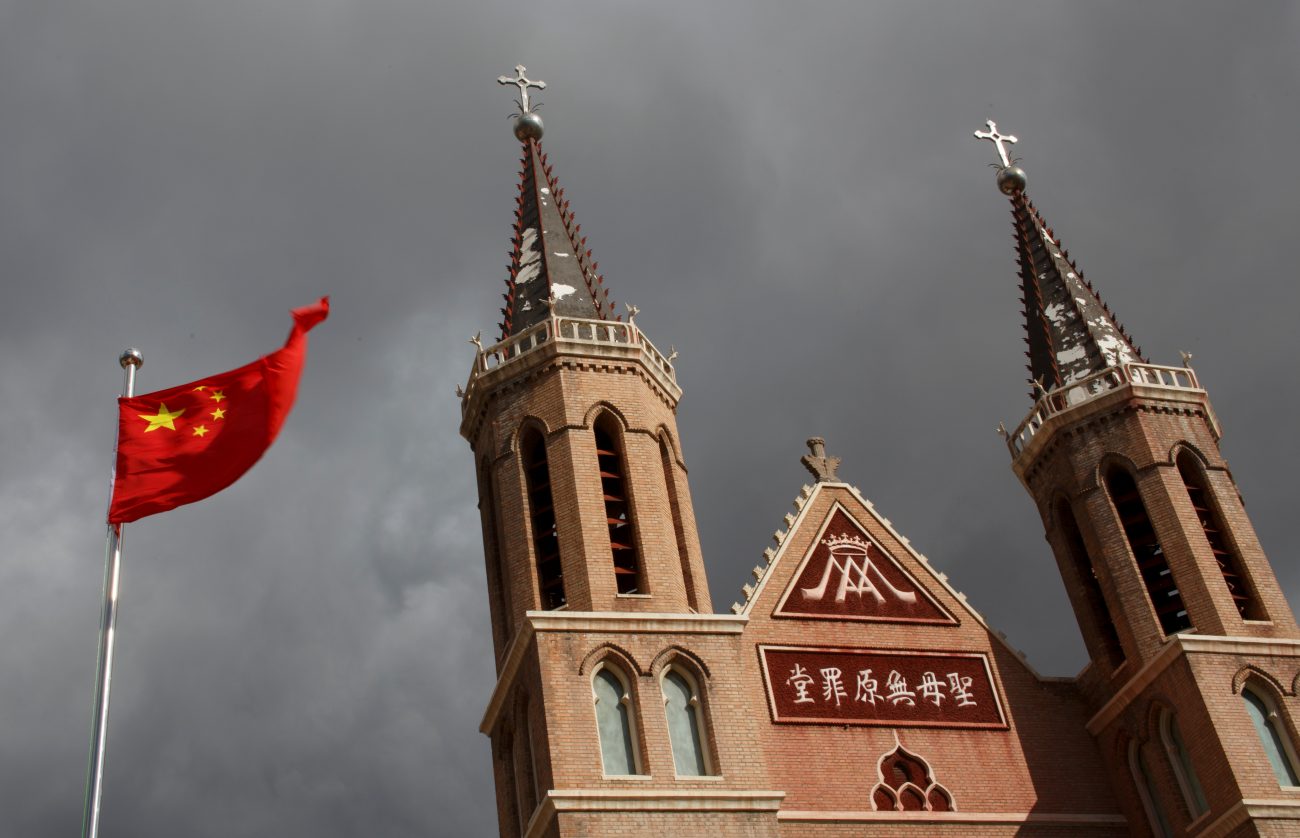 The Chinese national flag flies in front of a Catholic church in Huangtugang, China, Sept. 30, 2018. The Chinese government has targeted unregistered Catholic and Protestant churches with an expansion of rules and regulations governing religious organizations. (CNS photo/Thomas Peter, Reuters)

It will institute another raft of laws covering 41 religion-related topics Feb. 1, two years after the implementation of another set of restrictive laws for religious groups in the country.

“The goal is to have all religious organizations brought into the open, registered in one way or another and thus end the duality of ‘official’ religious organizations and ‘underground’ (or unregistered), which in China means the government knows about them but (previously) let them be,” Francesco Sisci, a senior researcher at Beijing’s Renmin University, told Catholic News Service.

Observers have noted that, if widely implemented, Article 34 of the Chinese Communist Party paper — published in late December — would apply direct pressure on unregistered churches.

It would cover “all matters involving money and finances. In practice, every significant move by a religious community should be submitted to authorities and carried out only if approved,” according to AsiaNews, a Rome-based missionary news agency.

As many as 50% of China’s estimated 10 million to 12 million Catholics worship in communities not registered with the Chinese government.

It is widely accepted by China experts familiar with tactics of the Communist Party that the key driver behind Beijing signing the September 2018 deal with the Holy See to regularize the appointment of bishops was to assert its control over the official Catholic Church. Yet while Pope Francis has encouraged Chinese clerics who operate in the unofficial church to join the Chinese Catholic Patriotic Association, he said they could to do what their conscience dictated.

Even more Protestants are believed to worship in unofficial or “house” churches. Estimates range from 30 million to 60 million Protestants who worship in churches that do not belong to the Three Self Patriotic Movement, which claims 28 million worshippers. The movement is the state-run religious body that oversees the collective Protestant churches.

State-run Xinhua announced the new regulations Dec. 30 in the wake of numerous local governments across the country banning civic and religious celebration of Christmas.

The new rules govern the “organization, functions, supervision and management of religious groups,” everything from teachings to rallies, as well as annual and daily projects. Last year, the Communist Party reiterated its ban on its 90 million members belonging to religious congregations, something that has been regularly ignored in practice. It also banned people under 18 from worshipping in churches and mosques and participating in any church or mosque-run activities, including Bible and Quran study as well as holiday camps.

The new rules further ramp up the process of so-called Sinicization of religion — effectively a project to embed the state into religion.

The rules say religious organizations must spread the principles and policies of the Chinese Communist Party, as well as national laws about religious personnel and religious citizens, supporting the leadership of the party and supporting the socialist system.

PREVIOUS: ‘No end in sight to the horror’: Australian bishops respond to fires

NEXT: As violence escalates in Myanmar, bishop calls for dialogue