‘No end in sight to the horror’: Australian bishops respond to fires 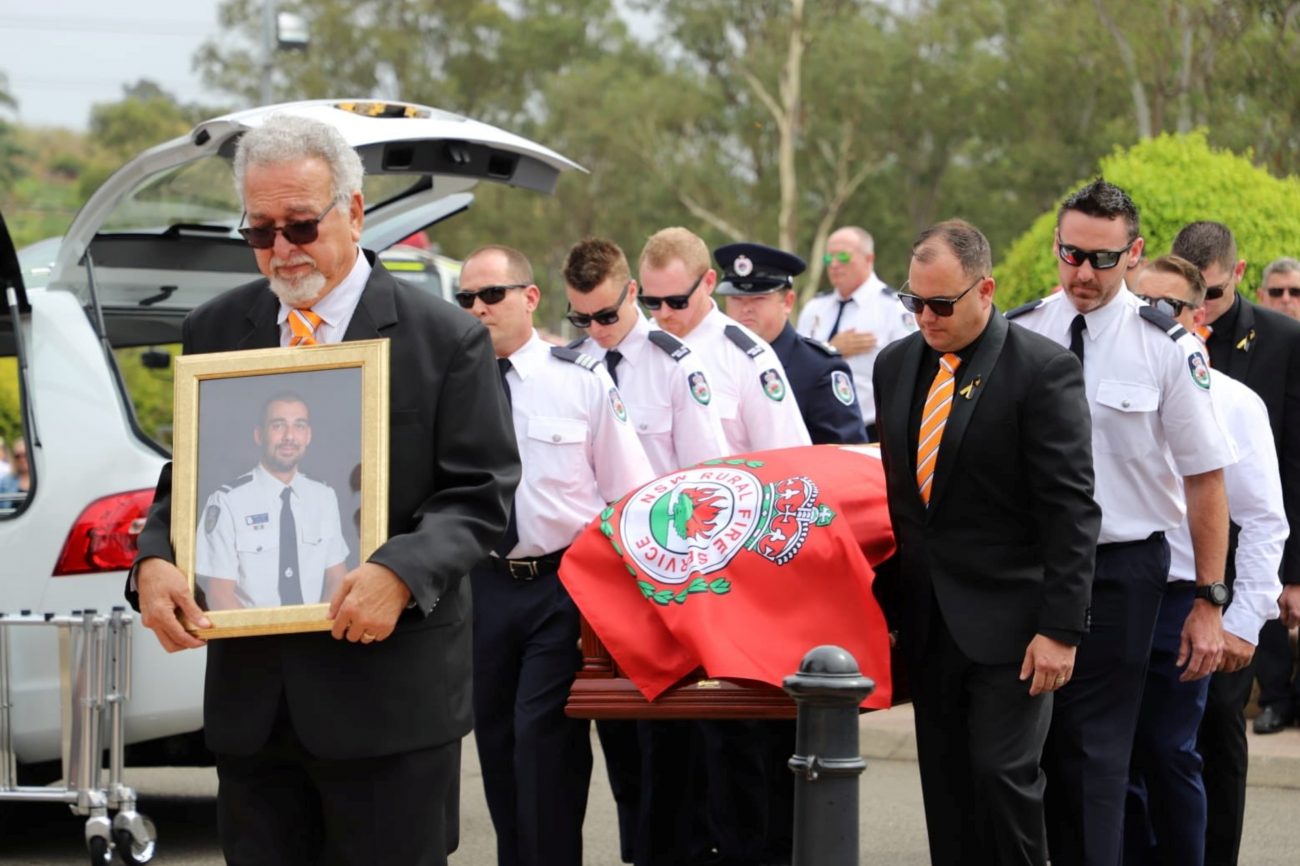 Firefighters from the Horsley Park Rural Fire Service carry the casket of volunteer firefighter Andrew O’Dwyer during his funeral Mass at Our Lady of Victories Catholic Church in Sydney Jan. 7, 2020. O’Dwyer died Dec. 19 when the truck he was traveling in rolled off the road after a tree fell in the town of Buxton. (CNS photo/NSW Rural Fire Service via Reuters)

CANBERRA, Australia (CNS) — Saying that “there is no end in sight to the horror which confronts us,” Archbishop Mark Coleridge, president of the Australian Catholic Bishops Conference, said the bishops have implemented a national response to months of wildfires.

The bishops have set up a national network, connecting people affected by the fires with “people who can help with tasks such as preparing meals, clearing properties, rebuilding communities, as well as pastoral and counseling support.” They are collaborating with other religious agencies and their institutes and will take up a special collection the last weekend in January, when Australia Day is celebrated.

Archbishop Coleridge said people who do not want to wait to donate to their parish collections can donate to the Society of St. Vincent de Paul, known in Australia as Vinnies.

The bishops’ conference also set up a special page, www.catholic.org.au/bushfires, with a button for donation to the Vinnies, as well as resources such as prayers of intercession, prayers for those affected, and statements on the fire from other organizations.

“We have all seen the apocalyptic images, even if we are not in the areas most affected,” the archbishop said. “Lives have been lost, homes and towns have been destroyed, smoke has shrouded large swathes of our country.

“The efforts of firefighters have been heroic. The resilience of the communities affected has been extraordinary.”

“Please know we are praying for you and your people in these difficult days,” Archbishop Gomez said in a brief letter dated Jan. 8.

“We pray in solidarity with you for those who have lost their lives and livelihoods and we pray for those whose homes and lives are still threatened,” Archbishop Gomez wrote. “We pray for the heroic firefighters and first responders and for all those working to provide relief and comfort to victims.”

At least 24 people have died in the fires, which began in August and now are in four states. CNN reported Jan. 7 that more than 2,000 homes in the state of New South Wales alone have been destroyed.

Archbishop Coleridge said the bishops were aware of “the huge amount being done” by governments and first responders and noted that local faith communities also were responding.

He also renewed his call for “insistent prayer for those stricken by drought and fire, for those who have lost their lives in the fires and their families, for rain to quench the parched land and extinguish the fires, and for urgent action to care for our common home in order to prevent such calamities in the future.”

“A genuinely Catholic response to a crisis of this magnitude must draw strength from prayer, which inspires concrete and compassionate action.”

He said experts recognized that it would be a long-term process to help people and whole towns rebuild.

At the Vatican Jan. 8, during his general audience, Pope Francis also remembered those affected by the fires: “I would like to ask everyone to pray to the Lord to help the people in this difficult time, with that blaze that is burning so strong. I am close to the people of Australia.”

PREVIOUS: Pope will celebrate Mass with bishops from 19 Mediterranean countries