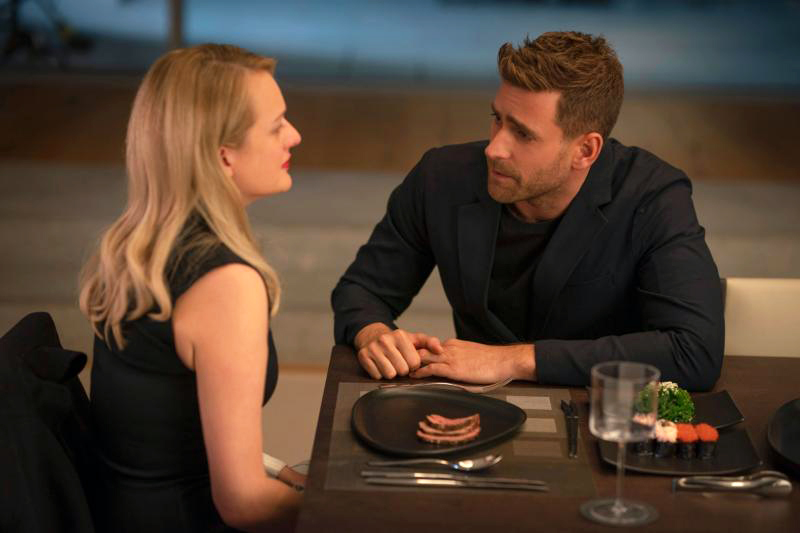 Yet, while his film, which bears only a very distant relationship to H.G. Wells’ 1897 novel, is far more intelligent than many thrillers, it’s also filled with the kind of graphic mayhem that casual moviegoers will not care to witness.

Moss, who is present in virtually every frame, plays Cecilia Kass, a former architect whose life has been paralyzed by her relationship with her maniacally possessive live-in boyfriend, cutting-edge optics researcher Adrian Griffin (Oliver Jackson-Cohen). The tense opening sequence finds Cecilia barely managing to escape, in the dead of night, from the isolated mansion the couple shares.

Shortly thereafter, however, Cecilia’s sister Emily (Harriet Dyer), who aided her getaway, brings Cecilia the news that Adrian has killed himself. At a subsequent meeting with Adrian’s brother, and lawyer, Tom (Michael Dorman), Cecilia learns that Adrian left her a sizable portion of his vast wealth.

Though Cecilia’s prospects briefly seem bright, a series of unsettling events soon convinces her that Adrian faked his death and is somehow stalking her, even though she can’t see him. Understandably, both Emily and James Lanier (Aldis Hodge), the childhood friend in whose home Cecilia has taken refuge, refuse to accept this outlandish idea.

As it becomes clear to her that manipulative, vengeful Adrian is out to ruin her life, Cecilia’s plight becomes increasingly desperate. Among other things, Adrian manages to endanger Cecilia’s ties to Emily and James as well as to James’ teen daughter, Sydney (Storm Reid), with whom Cecilia has long been close.

The unfolding of the plot is marked by intense bloodletting, including a shooting spree that’s anything but stylized. The movie’s conclusion, moreover, is aimed to appeal to viewers’ basest instincts. Only the gulf separating the picture’s sci-fi scenario from anything in the real world makes it acceptable for a narrow swath of grown-ups.

The film contains much gory violence, including gunplay, vigilantism and vengeance themes, cohabitation, at least one use of profanity, about a half-dozen rough terms and fleeting crude and crass language. The Catholic News Service classification is L — limited adult audience, films whose problematic content many adults would find troubling. The Motion Picture Association rating is R — restricted. Under 17 requires accompanying parent or adult guardian.

PREVIOUS: Tame ‘Call of the Wild’ echoes with love, friendship

NEXT: Coach and his team find ‘The Way Back’ from suffering