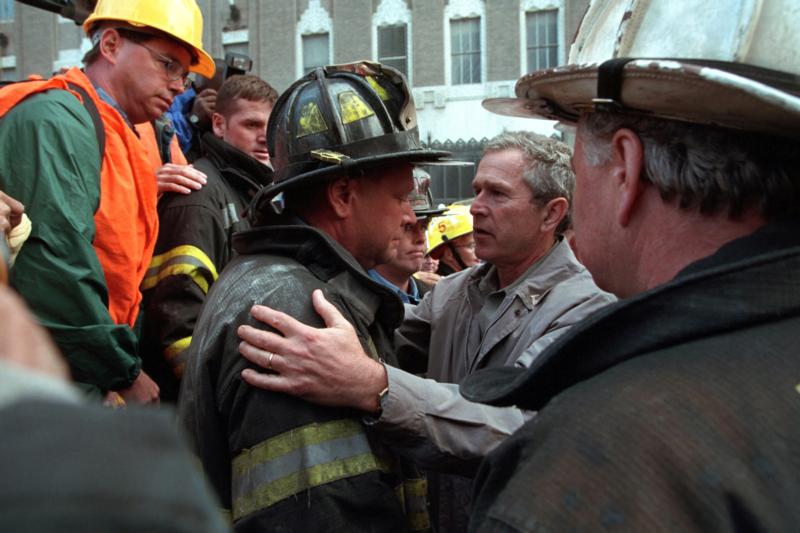 NEW YORK (CNS) — A warts-and-all view of the 43rd president of the United States is showcased in “George W. Bush,” a two-part documentary premiering on PBS Monday-Tuesday, May 4-5, 9-11 p.m. EDT each night. Viewers should check local listings, though, since broadcast times may vary.

Make that a mostly warts view. The program, part of the “American Experience” history series, makes for grim viewing as it recounts the multiple disasters that befell Bush throughout his 2001-09 presidency, from the 9/11 terrorist attacks through the stock market collapse seven years later.

In between, Bush starts what will become America’s longest war, the conflict in Iraq, and presides over the catastrophic federal response to Hurricane Katrina in New Orleans.

Director Barak Goodman, who co-wrote the script with Chris Durrance, relies more heavily on the accounts of journalists than a handful of Bush cabinet members and aides in retelling the story. As a result, there’s a strong whiff of bias in this documentary, which dishes up swift condemnations with the benefit of a backward view.

Conspicuously absent, moreover, is the former president himself, who might have responded to the program’s numerous accusations of inexperience and incompetence.

The profile takes advantage of a wealth of archival footage (some too graphic to be shown on the evening news) that contains occasional crude and profane language. This is, accordingly, a program for mature viewers.

Part one of the documentary chronicles the unlikely rise of the fun-loving firstborn of a political dynasty. Bush is depicted as a drifter who prefers parties to study at Yale and struggles to emerge from the shadow of his mighty father, future president George H.W. Bush.

Bush the younger was a latecomer to the political scene. After stints as an oilman and owner of a baseball team, he swore off alcohol at age 40 and embraced his Christian faith. In 1994, he defeated the incumbent firebrand, Democrat Ann Richards, to become governor of Texas. During his second term in that post, he met Karl Rove, master strategist and political star-maker.

“Karl Rove was Pygmalion,” says author Louis Dubose. “He created George W. Bush. He could be groomed for something greater.” That meant following in his father’s footsteps.

As many will remember, the 2000 presidential election was one of the most contentious in history, pitting Bush against the sitting vice president, Al Gore. Bush won by a razor-thin margin (hanging chads, anyone?), and only after the Supreme Court intervened. He inherited a country deeply divided, with half of the population considering him an illegitimate president.

“The decision was so bitter, and neither side really won,” observes reporter Eugene Robinson. “It’s a fight that never got resolved, and we have been in our corners ever since.”

Bush was less than nine months into his first term when 9/11 happened. Overnight, the man who campaigned as a domestic-affairs president had to become a wartime one, determined to protect the country from another assault. It was a heavy burden that would overshadow the rest of his political career.

Part two of “George W. Bush” opens with the fateful decision to go to war with Iraq and topple its dictator, Saddam Hussein — something Bush’s father decided not to do during the Persian Gulf War. What seemed like a swift victory (the “Mission Accomplished” speech that Bush would later regret) descended into a quagmire as sectarian violence accelerated. America risked winning the war only to lose the peace.

Public opinion turned against Bush over the war, but that did not prevent his reelection in 2004. Things went from bad to worse in Iraq, and Bush’s vision of a democratic country serving as an anchor of peace in the Middle East would go unrealized. Nonetheless, he resisted calls to retreat.

“Bush knew that would be Vietnam all over again and the country couldn’t stand it,” Rove recalls.

Meanwhile, the response to Hurricane Katrina in 2005 was bungled. This was regarded by the media as the “domestic version of Iraq” and as further evidence of Bush’s incompetence. The mortgage-backed securities crisis and the collapse of Lehman Brothers in 2008 was another bitter blow, requiring swift action to stave off a second Great Depression.

The pounding hammer of history pauses for a moment in “George W. Bush” to acknowledge a genuine achievement: a campaign to fight the HIV/AIDS pandemic in Africa, which saved millions of lives.

Hindsight is 20/20, the saying goes, and “George W. Bush” takes full advantage, claiming the president should have known that 9/11 and the stock market collapse were coming, or understood the long-term consequences of his actions in Iraq. That’s easy enough for pundits to say in 2020.

Of course, there are hard lessons to be learned. But in the end a kind of pathos emerges from “George W. Bush.” Forty-three was beset from the get-go, and one can only wonder what might have been for his presidency, America and the world had 9/11 never happened.

NEXT: Ray Repp dies; wrote hymns ‘Allelu!’, ‘I Am the Resurrection’