Dioceses scramble to feed the poor at their door 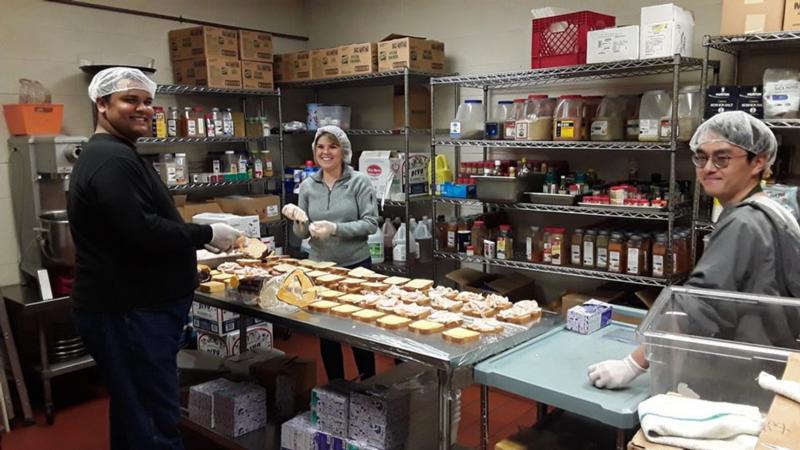 WASHINGTON (CNS) — From one end of the country to the other, dioceses and Catholic charitable agencies are coming up with ingenious solutions to meet growing hunger in their communities.

The Archdiocese of San Francisco started a grocery delivery service and hotline in early April. Within two weeks, 14 parishes had signed on with parishioners committed to help deliver groceries to people in need.

The “Love Your Neighbor Ministry” has a toll-free hotline that is answered eight hours a day Mondays-Fridays, with voicemail during off-hours and weekends. Calls are answered in Spanish and in English.

Thomas Rudkins, founder of the Options United pregnancy help hotline, donated the Love Your Neighbor hotline. And Paul Venables, founder and chairman of a San Francisco ad agency, donated pro bono staff, which developed a social media messaging campaign with signature posts including “Sometimes loving your neighbor is picking up a bag of cheese puffs” and “Kindness is contagious.”

The archdiocese is offering $1,000 grants to each parish that commits to supporting the program with the funds to be used to purchase groceries. The funds are drawn from monies returned to the archdiocese from the annual Catholic Relief Services Rice Bowl campaign that are designated to be used for the alleviation of poverty.

In Los Angeles, the Knights of Columbus donated $100,000 to five food banks in the Archdiocese of Los Angeles under the organization’s new national initiative, “Leave No Neighbor Behind,” which urges Knights to assist their neighbors, including those in the community and parish, their fellow Knights and others. Knights are also being encouraged to make blood donations, especially given current shortages.

(Read about the Knights’ initiative operating in the Archdiocese of Philadelphia.)

“As an organization, we have provided vital support at key moments, including during the 1918 flu pandemic, during two world wars, and after natural disasters,” said an April 21 statement by Carl Anderson, the supreme knight and CEO of the Knights of Columbus.

“Our ‘Leave No Neighbor Behind’ initiative continues that tradition,” he added, “and we will work directly with food banks to help ensure that food reaches those most in need in communities from coast to coast.”

In the Diocese of Paterson, New Jersey, its three food pantries have remained open to serve the needs of the hungry. Typically, they serve as “community choice” pantries, with individuals “shopping” like they would at a supermarket.

Now, though, to minimize exposure, Catholic Charities volunteers have been prebagging food and bringing the bags outside to those in need. Volunteers also have helped by hosting food drives and delivering food to the homes of senior citizens and those with disabilities.

“We are seeing more people come to our food pantries than ever before in our history,” said a statement by Carlos Roldan, director of Catholic Charities Food Pantries. “In addition to people visiting our programs, we are delivering food to senior centers, to families in need, and to those who are homeless. In the past month alone, we have helped nearly 10,000 people. We are fortunate to have help from our volunteers who truly make a difference.”

In the Bronx, the poorest of New York City’s five boroughs, Latin Americans — many of them of Dominican ancestry — have been hit hard by the COVID-19 crisis. Catholic Charities Community Services/Alianza has adapted its service delivery model to include food aid.

Over a two-day period, Alianza expected to distribute 1,300 bags of groceries at four sites in the Bronx. Prior to the food drives, Alianza had responded to the crisis by buying tablets for students who did not have devices so they could attend school online, helping families without internet get Wi-Fi hotspots in their homes and conducting daily wellness check-in calls to 3,500 students.

In the neighboring Diocese of Brooklyn, Catholic Charities of Brooklyn and Queens has conducted weekly “pop-up” grocery distribution.

In the first such distribution, Catholic Charities provided 1,000 families and individuals bags of food that will feed a family of three for three days. Catholic Charities also provided access to additional assistance, information, and resources, including outreach material encouraging an already undercounted neighborhood to participate and self-respond to the 2020 Census.

The second pop-up was in the now-ironically named Corona neighborhood of Queens. What is not ironic is that, according to the Diocese of Brooklyn, 60% of the COVID-19 cases in New York City are in the boroughs of Brooklyn and Queens.