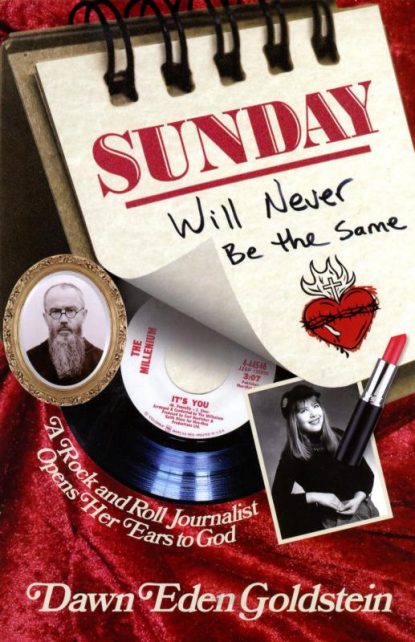 This is the book cover of “Sunday Will Never Be the Same: A Rock and Roll Journalist Opens Her Ears to God” by Dawn Eden Goldstein. The book is reviewed by Regina Lordan. (CNS)

Open this memoir and brace yourself for some pretty unconventional Catholic reading. Equal parts conversion story and underground rock ‘n’ roll music trivia collection, “Sunday Will Never Be the Same” by Dawn Eden Goldstein may not be for everyone, but the author’s raw honesty is worthy of the reader’s time.

Conversion stories are typically inspiring, just by their nature of darkness into light (cue the biblical Saul’s conversion here). But this one is notable both in its unfolding and in its telling. In this account of a particularly long and winding road to Damascus, Goldstein shares her story in real-time, first-person narration.

Her writing reveals a life of turmoil, loneliness and finally commitment to the Catholic faith.

The author opens the book with the voice of her whimsically curious 5-year-old self. Her writing is descriptive but straightforward, a nod to her trade in journalism. Readers easily will be able to picture Goldstein as a child staring out at the Galveston Bay, envisioning how it entrances her into deep thoughts only an innocent child could have.

Goldstein is the Jewish daughter of a divorced bohemian mother who herself dabbled in different religions and theological schools of thought. Her childhood experiences of abuse and tumult contribute to influencing her mental health and relationships with others, a connection she doesn’t fully understand until well into her adulthood.

Her younger and formative years are filled with an extremely strong bond with her mother and academic success. But Goldstein’s life also is tinged with recurring sadness. The waves often envelope her into an all-encompassing emptiness, which become an all-too-familiar accompaniment to any feelings of accomplishment or success.

Excitement and anxiety are often intertwined, dismantling moments of well-earned contentment. Each milestone is wrapped in both anxious happiness and sadness, lingering within her physical and emotional pain.

But thankfully Goldstein had rock ‘n’ rock, and she was still whimsically curious, this time about the many characters who influenced the New York City underground music scene. An extremely talented, if not totally obsessed, music historian, she earned her living with various freelance writing gigs.

Each show, interview and record review gave her one more reason to live. Rock ‘n’ roll became her lifeblood, enabling her to survive and pay the bills.

But this life wasn’t enough for her. Her years were filled with interruptions and questioning — leaving readers wondering if these were little taps from God trying to get her attention and if she’d ever open “her ears to God” as the title foreshadows.

Rocky employment tainted with controversial blog posts and vulgar employers continued to add to a life many would describe as chaotic.

And yet that was Goldstein’s life, and she tells it like it is, raw and again in real-time, as it is unfolding. She bears a sadness and desperation — for a meaningful romantic relationship, for relief from her mental and psychological pain, and for a job in which she could flourish. She should be applauded for her bravery and ability to expose herself in such an honest way.

In the end, readers who stick with “Sunday Will Never be the Same” will find themselves rooting for her success, sighing in relief and cheering in praise over the miracle that is her conversion.

Lordan, a mother to three young children, has master’s degrees in education and political science and is a former assistant international editor of Catholic News Service. She currently teaches and is a court-appointed advocate for children in foster care.

PREVIOUS: The best things in life are free — like film classics in public domain

NEXT: Try these 12 tips to manage your kids’ screen use