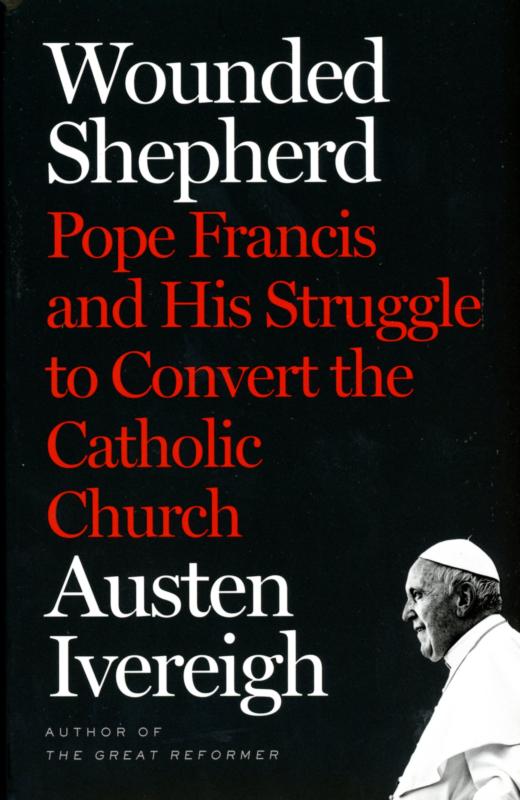 This is the book cover of “Wounded Shepherd: Pope Francis and His Struggle to Convert the Catholic Church” by Austen Ivereigh. (CNS)

When it comes to interpreting Pope Francis, Austen Ivereigh is often the go-to guy. After the pope’s election in 2013, Ivereigh was quick out of the gate with a 2014 biography, “The Great Reformer.” In “Wounded Shepherd,” Ivereigh chronicles the pope’s seven-year effort to make major changes in how the church acts, thinks, and bureaucratically administers doctrine and practice.

The Argentine pope’s reforms go way beyond rearranging the chairs, name plates, finances and priorities of the church’s administrative offices. His reforms include rethinking divisive issues such as the priestly ordination of married men, the ordination of women — at least to the diaconate — and the reception of Communion by divorced and remarried Catholics whose first marriages were not annulled.

And then there is his bold declaration that defending the environment from climate change is a pro-life issue, shaking up some conservative Catholic groups.

The pope’s approach emphasizes converting the mindset of the church’s leadership: basically doing battle with centuries-old “clericalism,” the view that only priests and bishops can run the church, as if this was an unwritten privilege of ordination.

Ivereigh astutely realizes this means the pope wants to convert the church’s thinking, approach and culture. It means putting pastoral reckoning over a doctrinal one; seeing people’s needs through emotional and psychological lenses not just intellectual ones; and following Christ’s example of teaching more with actions, and even silence, than with words.

The author ties this to the pope’s stress on evangelizing in times of diminishing active church membership and dwindling influence of religion in general in a secular Western world.

But the book stresses that it’s been rough sledding for Latin America’s first pope.

Ivereigh, a British Catholic journalist and contemporary church historian, chronicles how these efforts have been popular with some Catholics while strongly — and publicly — contested by conservative to right-wing church officials, often supported by monied Catholics in the United States and Europe. Some progressives even complain he moves too slowly.

Not everything in the book is a papal positive. Ivereigh drags out the dirty laundry of the church’s sex abuse scandals and how the pope initially tarnished his credibility by backing a Chilean bishop despite pubic evidence that he covered up for a notorious child-abusing priest.

The pope later recanted his initial view after sending his own investigative team, which confirmed the allegations, and the bishop was removed. But the misstep was used by the pope’s opponents as a wedge against his overall agenda.

As a contemporary church historian, Ivereigh gives context. Issues such as priestly ordination of married men, women deacons, Communion for divorced and remarried Catholics, and human stewardship over the environment as a moral obligation are not unique to Pope Francis. They’ve been under the firmament for decades in the modern church. Francis has just upped their priority.

Ivereigh posits that the pope’s reforms are starting to take root aided by his naming of like-minded bishops, a common tactic used by previous popes. He is optimistic, perhaps too optimistic, that they will be hard to derail.

From the book’s beginning, it’s obvious the author sympathizes with the pope’s vision and approach, sometimes giving short shrift to his critics. Yet his analysis of the pope’s thinking is spot on. Whether one agrees or disagrees with Pope Francis, “Wounded Shepherd” provides an accurate view upon which to build an opinion.

PREVIOUS: Play this game for beautiful, poetic escape from stress

NEXT: A shaggy ‘Scooby-Doo’ film returns with modern refit