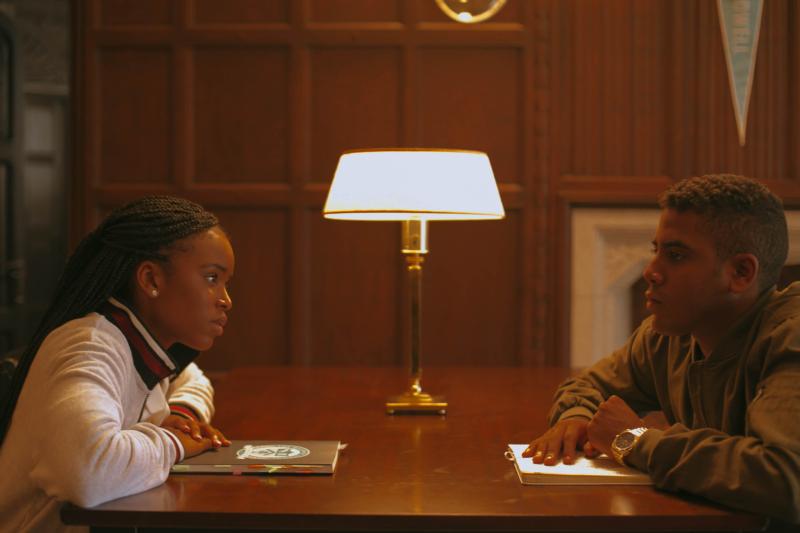 Lovie Simone and Jharrel Jerome star in a scene from the movie "Selah and the Spades." The Catholic News Service classification is A-III -- adults. The Motion Picture Association rating is R -- restricted. Under 17 requires accompanying parent or adult guardian. (CNS/Amazon Studios)

NEW YORK (CNS) — “The Godfather” comes to the groves of academe in the curious psychological drama “Selah and the Spades” (Amazon). In her feature debut, writer-director Tayarisha Poe turns an elite private high school into the unlikely setting for a study of criminality that echoes many familiar tropes of the underworld genre.

Haldwell, the seat of learning in question, is ruled by five factions of which the Spades, under their veteran leader, Selah Summers (Lovie Simone), is the most powerful. The gang has thrived by supplying their fellow students with narcotics and alcohol.

With graduation looming, however, senior Selah is concerned about her legacy. Then she meets and befriends a newcomer to Haldwell, sophomore and gifted photographer Paloma (Celeste O’Connor). Selah takes Paloma under her wing and begins training her protege in the Machiavellian tactics that have led to her success.

As Paloma’s star rises, that of Selah righthand man, Maxxi (Jharrel Jerome), begins to fade. He’s become distracted by romance and begins to slip up in significant ways. Meanwhile, Selah’s principal rival, Bobby (Ana Mulvoy Ten), leader of a clique that takes its name from hers, maneuvers to undermine Selah’s mastery.

Poe’s script adopts a neutral stance toward the vices to which Selah and her followers cater, taking both their existence and the profitability of indulging them merely as matters of fact.

Poe opts instead to focus on other matters. These include the origins of Selah’s drive for dominance — her mother Maybelle (Gina Torres) is a control freak who belittles her — shifting relationship dynamics among the characters and Paloma’s willingness to use force to become the equivalent of a mafia “made man.”

Oddly, though not averse to violence or lawbreaking, Selah is chaste, as she reveals during a heart-to-heart chat with Paloma. That, too, however, has to do with her refusal to be vulnerable, rather than with any pursuit of virtue.

Together with the sometimes-salty dialogue, Poe’s noncommittal moral stance obviously rules out youthful viewership. Grown moviegoers will find “Selah and the Spades” artfully constructed and convincingly acted, but may wonder what exactly they are meant to take away from this parable about the thirst for power and the perils of possessing it.

The film contains mature themes, including drug use and underage drinking, offscreen violence with fleeting gore, a few profanities, a couple of milder oaths, about a half-dozen rough terms and occasional crude and crass language. The Catholic News Service classification is A-III — adults. The Motion Picture Association rating is R — restricted. Under 17 requires accompanying parent or adult guardian.

NEXT: Play this game for beautiful, poetic escape from stress