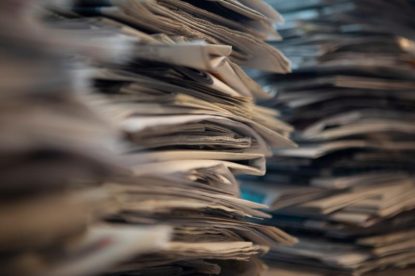 Newspapers are seen in this illustration photo. The Phoenix Diocese is cutting its diocesan newspaper due to revenue shortfall resulting from the COVID-19 pandemic. (CNS photo/Tyler Orsburn)

PHOENIX (CNS) — The suspension of public Masses, the closing of schools and the limiting of public gatherings has helped slow the spread of COVID-19, but it also has resulted in financial and business challenges for churches and schools in the Diocese of Phoenix.

In response to an anticipated $6 million revenue shortfall for the upcoming fiscal year that begins July 1, as well as ongoing shortages since the pandemic became a national emergency in March, the diocese announced April 30 a series of cuts, including the loss of 21 jobs and the end to the monthly diocesan newspaper, The Catholic Sun.

In addition to the job losses, eight vacant positions will not be filled, 13 other employees will work reduced hours, furlough days have been implemented and will continue into the new fiscal year, priests’ base salary has been cut 25%, and travel has been reduced to essential trips with prior approval only.

The Catholic Sun, which was direct-mailed to Catholic households throughout the diocese, published its final issue in April. The diocese said it will communicate through social media, television, radio, podcasts, diocesan websites and Flocknote, a communication tool for sending text messages and emails.

“These decisions are difficult and were implemented after much prayer and discernment,” the diocese said in a statement announcing the cuts. “The Diocese of Phoenix is grateful for the work, sacrifices and friendships of our brothers and sisters in Christ, and we ask the community to join us in praying for them and their families.”

The diocese said its pastoral center would “continue to extend essential services and support” for clergy, religious, parishes and schools. The diocese, it added, “will continue to make strategic decisions to meet the growing need of serving a Catholic population that is made up of great diversity; all offices will develop and enhance their cultural understanding and sensitivity to the people we serve by offering multilingual and multicultural support.”

In a related story, the Catholic Telegraph, the monthly newspaper of the Archdiocese of Cincinnati, will change its format to a magazine. The last newspaper issue will be produced in May, and the magazine format will debut in June.

The Catholic Telegraph is mailed to about 150,000 Catholic households in the archdiocese. Mail delivery will continue with the magazine.

The newspaper, founded in 1831, had to suspend publication briefly in 1832 as a cholera epidemic spread throughout the United States. The publication’s website features a story on its coverage of the flu pandemic of 1918-19.

Rinaudo added the magazine will retain the newspaper’s columnists and freelancers.

NEXT: Leaders urge Cardinal Dolan to step back from praise of Trump