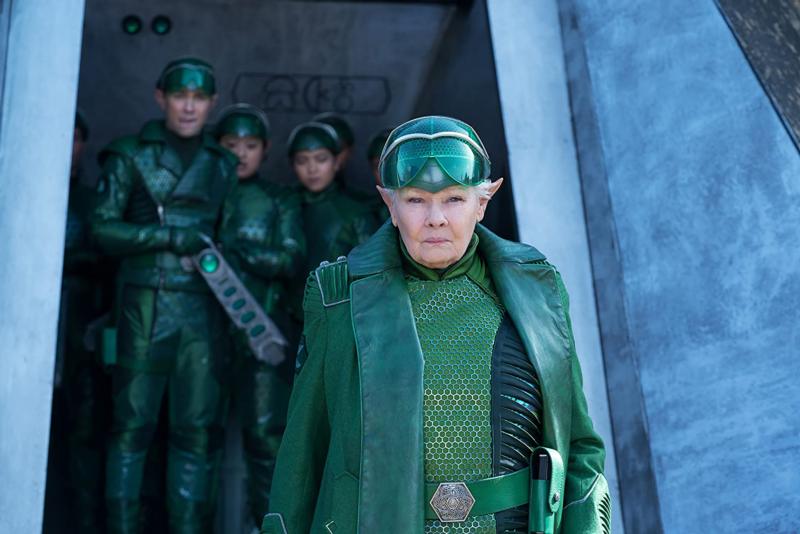 Judi Dench stars in a scene from "Artemis Fowl." The Catholic News Service classification is A-II -- adults and adolescents. The Motion Picture Association rating is PG -- parental guidance suggested. Some material may not be suitable for children. (CNS photo/Disney Enterprises)

NEW YORK (CNS) — In the hands of such great artists as British novelist J.R.R. Tolkien or Irish poet W.B. Yeats, the elements of medieval lore have been deployed to great effect.

In fact, despite his past achievements at the cinematic helm, Branagh here succeeds in doing something almost unimaginable. To wit, he makes the formidably gifted — and gifted at being formidable — Dame Judi Dench, tricked out in the guise of a leprechaun, seem downright foolish.

That’s symptomatic of a larger problem with his film, the origins of which may or may not lie in its source material.

Branagh never succeeds in overcoming the disconnect between the earnest tone of screenwriters Conor McPherson and Hamish McColl’s script and the inherent silliness of many of the non-human characters who populate it. The sight of Foaly — a centaur played by Nikesh Patel — prancing around, for instance, is risible.

Back on the human side of the narrative’s divide lies another difficulty in the fact that our protagonist, the brilliant 12-year-old boy of the title (Ferdia Shaw), is a brainy brat in whose quest viewers are unlikely to feel much investment. McPherson and McColl only aggravate the situation by failing to lay the groundwork necessary for gaining audience sympathy.

After Artemis’ often-absent namesake dad (Colin Farrell), a wealthy, mysterious antiques dealer based in Ireland, disappears, the world press speculates feverishly on his fate. But Artemis himself discovers that pops has been kidnapped by Opal Koboi (Hong Chau), a malevolent pixie, and thus learns that the world of Celtic mythology about which his father has been educating him is real.

Teaming with Domovoi Butler (Nonso Anozie), Dad’s aptly named butler, Holly Short (Lara McDonnell), an elfin security officer, and Mulch Diggums (Josh Gad), the dwarf who serves as the movie’s narrator, Artemis seeks out the priceless artefact Opal has demanded as a ransom. Along the way, he dons a dark suit and sunglasses that make him look like an undersized addition to the cast of “Men in Black.”

At one stage of Artemis’ journey — during which he gets the better of Commander Root (Dench, begorrah!), Holly’s superior — a predictable pro-tolerance theme crops up momentarily. But this is put across feebly and soon sinks out of view.

With little bothersome content, “Artemis Fowl” is acceptable for all but easily frightened tots. Yet it doesn’t take much mature discernment to recognize from its poorly structured proceedings, in which spectacle consistently trumps story, that Kenneth has failed to find the frequency.

The film contains much bloodless combat and brief scatological humor. The Catholic News Service classification is A-II — adults and adolescents. The Motion Picture Association rating is PG — parental guidance suggested. Some material may not be suitable for children.

NEXT: Book is among scant print resources for Catholic sex abuse victims