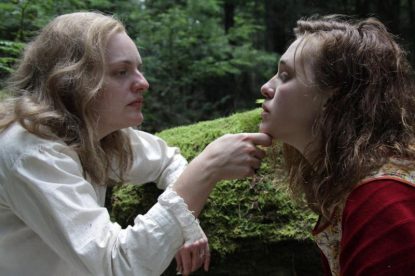 NEW YORK (CNS) — On its surface a suspense drama, “Shirley” (Neon) also carries with it the full discomfiting feeling of a class assignment.

That’s because the main character, author Shirley Jackson (Elisabeth Moss), wrote “The Lottery,” the instantly classic horror story about murderous villagers that’s been a staple of high school literature anthologies since it was first published in 1948 in The New Yorker magazine. She was the master of that literary form long before Stephen King arrived on the scene.

Actors typically portray 20th-century authors with the same zeal they use when donning tights to play comic-book superheroes. This is done here with all the familiar elements: typewriter, chain-smoked cigarettes, a dark aerie of an office, tumblers of bourbon mingled with self-loathing and endless backbiting. You know — writers!

Most of the story, directed by Josephine Decker and adapted by screenwriter Sarah Gubbins from the novel by Susan Scarf Merrell, closely adheres to biographical truth, with the addition of a young fictitious couple, Rose (Odessa Young) and Fred (Logan Lerman).

They’ve arrived at Bennington College in Vermont, shortly after the fame of “The Lottery” has set in, because Fred has a new job as the teaching assistant for Jackson’s professor husband, Stanley Edgar Hyman (Michael Stuhlbarg).

The Shirley of “Shirley,” as was the real-life Jackson, is obsessed with the occult. “I’m a witch. Didn’t anyone tell you?” she asks Rose at one point.

She’s also suspicious of her husband’s many affairs with co-eds — and sometimes, in her stupors, imagines Rose to be another partner in these liaisons.

Shirley is at work — slowly and painfully — on a novel that sharp-eyed viewers will recognize as 1951’s “Hangsaman,” the story of a college freshman’s descent into madness. The book is a gothic bildungsroman — or, in popular parlance, coming-of-age tale. (Term papers are due Friday.)

Stanley, a specialist in analyzing literary criticism, decides it would be a good idea if his wife had, not a professional assistant of her own, but rather a housekeeper, since Shirley is decidedly slovenly as well as agoraphobic and prone to panic attacks.

To this, Rose, who is pregnant, eagerly accedes. Most of the rest of the plot is taken up with Shirley’s mental state and occasional outbursts and their effect on Rose’s sanity as the couples share a house and try to learn to get along.

Rose sort of transforms into the girl in “Hangsaman.” It’s not overly frightening, but as a literary device? Hot-diggity — if you like that sort of thing. And did we mention bitter arguments about academia and the deliberate parallels to Edward Albee’s “Who’s Afraid of Virginia Woolf?”

English professors are the savages of the literary jungle. “Over my dead body will that boy be getting tenure!” Stanley sneers of Fred, and his most cutting critique is to call Fred’s dissertation “derivative” and “terrifically competent — there’s no excuse for that!”

Not exactly a blood-on-the-floor moment. But it’s that sort of movie. Those who enjoy literary arguments will get them. Those looking for clear moral messages will be out in the fog.

The film contains occult themes, two brief scenes of marital lovemaking, one of them in a sordid setting, glimpses of upper female nudity, references to suicide and fleeting rough and crass language. The Catholic News Service classification is A-III — adults. The Motion Picture Association rating is R — restricted. Under 17 requires accompanying parent or adult guardian.

NEXT: ‘King of Staten Island’ reigns in crude (but touching) story