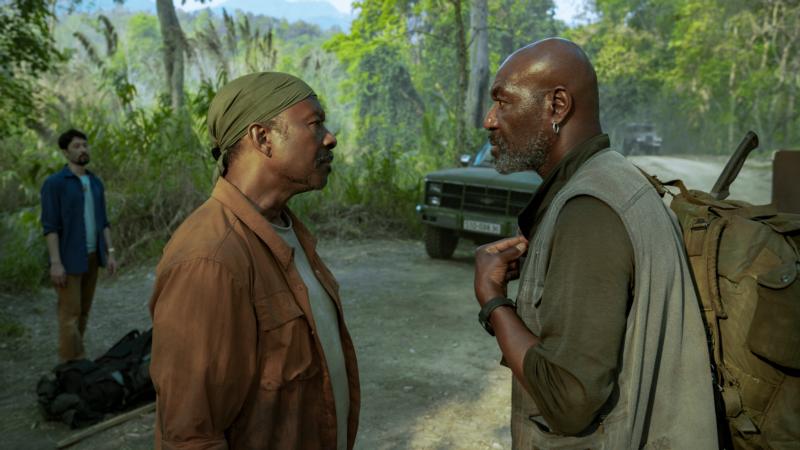 With the rich but harrowing drama “Da 5 Bloods” (Netflix), director and co-writer Spike Lee makes the point that the burdensome, sometimes crippling, legacy of armed conflict can be equally infernal.

Lee and his script collaborators — Danny Bilson, Paul DeMeo and Kevin Willmott — follow a quartet of veterans who formed a deep bond during their service in Vietnam as they return there five decades later. Of the four, deeply traumatized Paul (Delroy Lindo) emerges as the most prominent.

Together with prosperous Eddie (Norm Lewis), ex-medic Otis (Clarke Peters), whose fondness for OxyContin makes his pals nervous, and barfly Melvin (Isiah Whitlock Jr.), Paul has made the trip for two reasons. The first is to retrieve the body of Stormin’ Norman (Chadwick Boseman), the group’s squad commander and revered mentor in matters moral and spiritual.

The other, secret, motive is to recover a cache of CIA gold the friends discovered after coming across a downed American aircraft during the war. This find shortly preceded Norman’s death in combat and his corpse lies nearby the wrecked plane.

The journey through the jungle that follows becomes a nightmare. It also serves as a springboard for Lee’s far-ranging reflections on race relations, politics, faith and the corrupting effects of greed.

In fact, Lee uses this quest — on which the ex-comrades are joined, at the last minute, by Paul’s estranged son, David (Jonathan Majors), who wants in on the windfall — as a parable for the whole African American experience of modern times. In the process, Norman becomes a Christ figure while the wearing of a “Make America Great Again” hat is used as a symbol of both ethical bankruptcy and mental instability.

Lee’s creative daring as his film reaches its climax combines with a wrenching performance from Lindo to deliver a searing emotional payoff. Yet to reach it, viewers have to endure incidents of shocking mayhem as well as a heavy-handed effort, early on, to give them a crash course in African American history.

Those on the lookout for cultural markers, meanwhile, will note Lee’s visual homage to Francis Ford Coppola 1979 epic “Apocalypse Now” as well as a photo of Norman that recalls the iconic 1960s image of Black Panther Party co-founder Huey Newton seated in a so-called peacock chair. Evocatively, the soundtrack is dominated by songs from Marvin Gaye’s 1971 album “What’s Going On.”

The French involvement in Southeast Asia is personified both by anti-landmine philanthropist Hedy (Melanie Thierry), with whom David strikes up a flirtation, and by her moral foil, wheeler-dealer Desroche (Jean Reno), to whom Paul and the others turn to export the gold. And the romantic involvement of some GIs with Vietnamese women is recalled by Otis’ reunion with an old flame, Tien (Le Y Lan).

Though it ends with a sense of resolution, the tone of “Da 5 Bloods” grows progressively grimmer for most of its running time. Thus, when Otis exclaims — after one of many startling, often brutal, developments — “Madness, madness!” the observation seems all too apt.

Amid the social turmoil sparked by the death of George Floyd, Lee’s harsh reckoning of black life in the last 50 years is, for those who can bear it, a painfully timely one. Though his movie has a great deal of darkness, it also, ultimately, has heart.

The film contains much bloody violence, including some extreme gore, gruesome images, many profane expressions, about a dozen milder oaths, pervasive rough and crude language and mature references to sexuality and to an out-of-wedlock birth. The Catholic News Service classification is L — limited adult audience, films whose problematic content many adults would find troubling. The Motion Picture Association rating is R — restricted. Under 17 requires accompanying parent or adult guardian.

NEXT: Hijack thriller ‘7500’ stays on autopilot