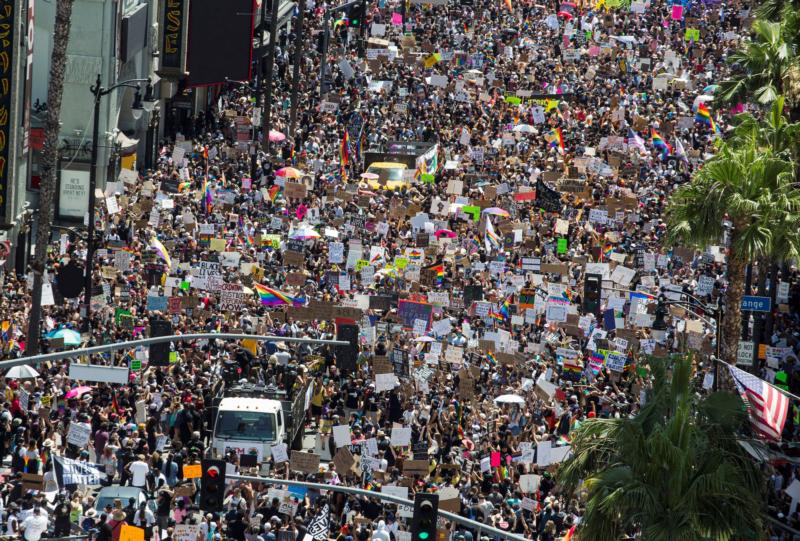 A "Black Lives Matter" demonstration is seen in Los Angeles June 14, 2020. Across the country, women religious have joined in peaceful protests against racial inequality, while others, home for health reasons amid the pandemic, are very much in spirit with the marchers. (CNS photo/Ringo Chiu, Reuters)

WASHINGTON (CNS) — Across the country, women religious have joined in peaceful protests against racial inequality, while others, home for health reasons amid the pandemic, are very much in spirit with the marchers.

But on the streets or not, many of them see the scourge of systemic racism not just as a blight on the nation but something the church must own up to and help eradicate.

Several women religious who spoke with Catholic News Service during the second week of June are no strangers to protests or justice advocacy. They said they’re been inspired by the massive crowds gathering in towns and cities demanding action in the wake of George Floyd’s death May 25 at the hands of a Minneapolis police officer.

But these sisters — especially black women religious who make up less than 1% of U.S. sisters — keep their hope fueled by this current movement very much in check, acknowledging the long road ahead to achieve change or healing.

Sister Leona Bruner, congregational leader of the Sisters of the Holy Family in New Orleans, a historically black congregation founded in 1842, said the wave of peaceful protests in all 50 states “should be a turning point” and is something she and fellow sisters are praying will happen.

Likewise, Sister Anita Baird, a member of the Society of the Daughters of the Heart of Mary, and the founding director of the Archdiocese of Chicago’s Office for Racial Justice, said she is “optimistic in some respects” right now but she also takes the long view. She cautions: “We have to stay focused; we can’t grow tired.”

“We’re at a moment that if we don’t get it right, we’re on our way to self-destruction as a nation,” she said. 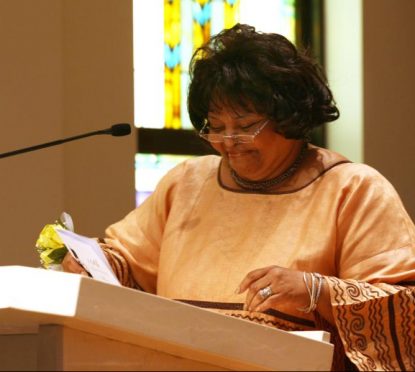 Sister Anita Baird, a member of the Society of the Daughters of the Heart of Mary, and the founding director of the Archdiocese of Chicago’s Office for Racial Justice, is seen in this 2010 file photo. Across the country, women religious have joined in peaceful protests against racial inequality, while others, home for health reasons amid the pandemic, are very much in spirit with the marchers. (CNS photoKaren Callaway, Catholic New World)

Sister Marcia Hall, an Oblate Sister of Providence, the first congregation of black women religious in the United States, founded in 1829 in Baltimore, had a similar take, saying: “I want to be hopeful, but by nature I am a skeptic. ” She is encouraged that the “number of white allies this time seems to be increasing and they are not just coming out and going back home; they seem to be in this for the long haul.”

Sister Hall, vocational director for the Oblates, said her hope is conditional and will increase once steps are taken toward police reform and more people vote this November.

At the Baltimore motherhouse where she lives, the sisters have been praying daily for racial equality efforts and with the news on in the common room’s TV every night, the dinner conversation has been pretty lively.

“We are very much aware of what’s going on,” she said, adding that it also speaks to the history of their order, which she said was founded “because we couldn’t join the white community” of local women religious.

Sister Baird, who is in her 70s and was traveling around the country giving anti-racism workshops for Catholic groups and parishes before the COVID-19 restrictions started, said about current protests: “I wish I could be out there with them.”

“People in my generation have not gotten it right; we have to get out of the way,” and let young people, with their understanding of the world community, move this forward, she said.

Many older sisters have expressed frustration that they can’t join the crowds calling for racial justice because they are following guidelines to stay at home while the nation is still in the midst of the coronavirus pandemic.

Sister Quincy Howard, a Dominican sister of Sinsinawa, Wisconsin, hesitated to join in marches at first because she lives in a community and did not want to expose herself and then others to COVID-19, but she felt called to join two peaceful protests in Washington in early June joining other Catholics.

She said her presence, as a white sister in a white habit, got some attention and photographs in the media. Some people thanked her for being there, especially other sisters who weren’t able to join. Her brother in Texas who saw her photo online didn’t recognize her because of her placard — “I repent of my racism,” written with black marker — not imagining she could be racist.

“He’s been blindsided, as many white Americans are, playing catch-up,” she said, stressing that her message reflected how everyone needs to recognize their part in modern racism. “We are all in this was my point.”

That’s what Sister Marie Lucey, a Sister of St. Francis of Philadelphia and longtime activist, also is recognizing, describing it as a “kind of wakening.” The gray-haired woman religious who attended the same Washington protests as Sister Quincy, said she wanted to stand with those seeking change. “As a white person, as a Catholic, as a sister, I have work to do,”

She also said she feels “some kind of hope, not optimism.” She is reading, and discussing with other sisters in her community, the current best-seller: “White Fragility: Why It’s So Hard for White People to Talk About Racism.”

The sisters feel a change is not only overdue in the nation but also in the church where they want to see more people of color represented in diocesan leadership positions and church organizations and for parishes and parish priests to really address racism.

Sister Baird, who was involved in anti-racism efforts for 15 years in the Chicago Archdiocese, said she worked with about every parish and Catholic school. “Yes, we had some accomplishments, but it’s a hard road climbing up a steep hill.”

“Much more needs to happen. What I would love to see is the police department take a good look at themselves,” said Sister Bruner, who took part in a New Orleans archdiocesan march and prayer service for racial justice June 5. “I also wish our church would speak out more, our community would like to do more too. We are more up in age; we pray a lot, but we also want to do something too.”

Wanting to do something more is what prompted Mercy Sisters Lisa Griffith and Regina Ward, leaders in the Mercy Education System of the Americas, to take part in two protests near where they live in Silver Spring, Maryland. One of the protests was student-led, another involved kneeling in silence for about three minutes at a major intersection, the amount of time Floyd was said to be no longer alive while still under the knee of police officer Derek Chauvin.

Sister Ward has marched before on other issues, but this was a first for Sister Griffith. Both said they weren’t sure if they would join more protests or not; they were taking it one day at a time.

Sister Griffith said it was important to “make sure everyone’s voice is heard” on this and to also keep the issue of racism, one of five critical concerns for the Mercy sisters, “out there in the forefront.”

“One of our phrases is: We need to have courageous dialogue to lead to greatest actions,” she said.

And that dialogue alone, in protest chants and in companies reworking policies, is something these women, religious see as a start, signaling something more to come.

As Sister Howard put it: “This moment and how the church appears to be engaging with it — fully, but awkwardly” — gives her hope.

But like the other sisters, she also tempers that, saying: “I have a lot of concerns and misgivings and I am painfully aware of the very long road ahead.” She said she worries that people are “so depleted in general now” but still, “between the pandemic and this awakening,” she thinks what has been sparked across the country is something big.

Or as she put it: “It feels biblical.” 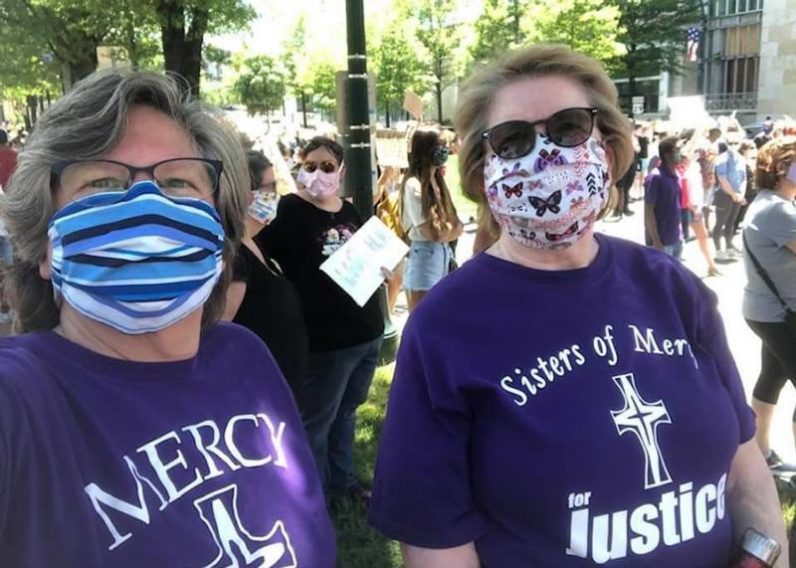 PREVIOUS: Catholics of all ages, races march on Atlanta for racial justice