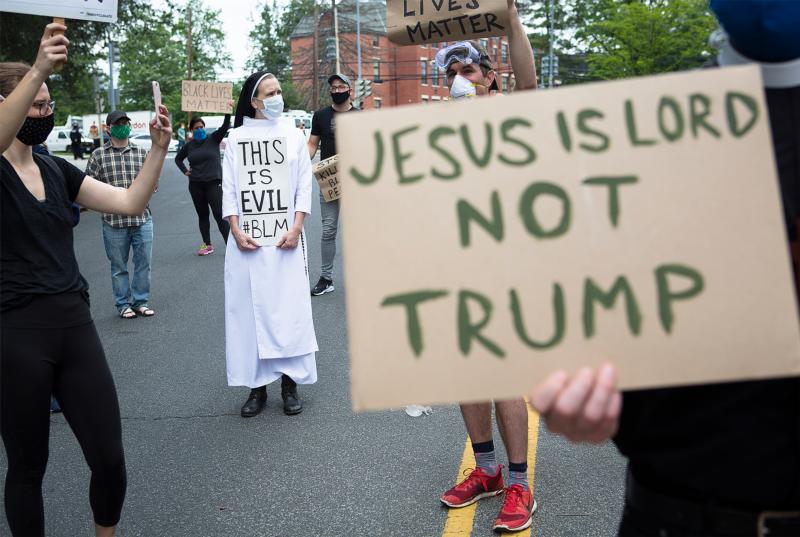 A woman religious and protesters in Washington gather near the Capuchin College June 2, 2020. President Donald Trump and first lady Melania Trump visited the nearby St. John Paul II National Shrine for the 41st anniversary of the beginning of St. John Paul's historic nine-day visit to Poland in 1979 during which he called for religious and political freedom in that country. (CNS photo/Tyler Orsburn)

The crosstown trip was excoriated by several Catholic leaders, including Archbishop Wilton D. Gregory of Washington, who said he found it “baffling and reprehensible that any Catholic facility would allow itself to be so egregiously misused and manipulated in a fashion that violates our religious principles” by allowing the visit.

The Trumps’ visit to the shrine in Northeast Washington came on the 41st anniversary of the start of St. John Paul II’s pilgrimage to his native Poland, the first trip by the pope during which he repeatedly addressed religious and political freedom.

The White House said the president offered no remarks during the visit. Secretary of State Mike Pompeo accompanied the Trumps during the brief stay at the shrine.

Over 100 people, including children and their parents, had gathered near the shrine and began chanting slogans calling for justice for George Floyd, an unarmed black man who died in police custody in Minneapolis May 25.

Archbishop Gregory said Catholic teaching calls the faithful to “defend the rights of all people, even those with whom we might disagree.”

The evening before the shrine visit, Trump walked from the White House to St. John Episcopal Church, which was set afire during protests May 31 that called for the nation to address racism and police violence.

Authorities fired flash-bang shells, gas and rubber bullets to disperse a crowd that had gathered in Lafayette Square across from the White House so Trump could walk to the church, where he held up a Bible as photographers captured the scene.

The crowd was present in the park to protest the death of Floyd and other African American people at the hands of police.

Archbishop Gregory in his June 2 statement questioned the decision to disperse the protesters in such a manner.

“St. John Paul II was an ardent defender of the rights and dignity of human beings. His legacy bears vivid witness to that truth. He certainly would not condone the use of tear gas and other deterrents to silence, scatter or intimidate them for a photo opportunity in front of a place of worship and peace.”

The shrine issued a statement about the visit less than two hours after the president and first lady left. It said White House officials originally scheduled the visit “as an event for the president to sign an executive order related to global religious freedom.”

“This was fitting given St. John Paul II was a tireless advocate of religious liberty throughout his pontificate,” the statement said. “International religious freedom receives widespread bipartisan support, including unanimous passage of legislation in defense of persecuted Christians and religious minorities around the world.

“The shrine welcomes all people to come and pray and learn about the legacy of St. John Paul II,” it added.

At least one other bishop was critical of the shrine visit.

Bishop John E. Stowe of Lexington, Kentucky, tweeted early June 2 that he hoped during the visit “someone proclaims today’s Gospel (Mark 12:13-17) where Herodians and Pharisees are called out for their hypocrisy.”

A spokeswoman for the U.S. Conference of Catholic Bishops said the bishops would not comment on the event because it “was not ours.”

Returning to the White House, Trump signed an executive order during the noon hour that the White House described as prioritizing U.S. support for religious freedom worldwide.

The order calls for the U.S. to allocate at least $50 million annually for international religious freedom programs. It also would widen economic incentives to support countries that expand religious practice and address attempts to restrict religious practice. 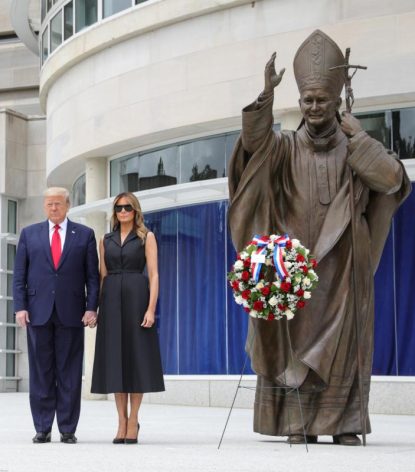 The law is named for Magnitsky, a Russian lawyer, who died in 2009 after being arrested and tortured in custody by officers of the Russian Ministry of the Interior.

A final provision of the order would mandate more federal employees who work abroad to undergo international religious freedom training.

Several observers questioned the president’s commitment to constitutionally protected freedoms given his efforts to limit the rights of refugees seeking asylum and past policies seeking to separate immigrant children from their parents.

Trump said June 1 he supports the rights of nonviolent protesters seeking justice for Floyd but that it is necessary to quell rioters who have looted businesses and set buildings and vehicles afire during clashes with authorities that have resulted in millions of dollars in damage and left dozens of people injured.

Patricia McGuire, president of Trinity Washington University, a short distance from the shrine, charged that Trump was misappropriating religious symbols for political gain rather than broadly supporting religious freedom.

“He’s torn down the wall between church and state … and instead (is) weaponizing religion for his own political goals,” she told Catholic News Service.

McGuire called on the U.S. Catholic bishops to stand “shoulder to shoulder at this shrine and tell him in no uncertain terms that this promotion of religion for political purposes is wrong.”

Sister Simone Campbell, a Sister of Social Service, who is executive director of the Catholic social justice lobbying group Network, accused the president of having “no clue about the teaching of Pope John Paul II or of our Catholic faith.”

“He refusal to acknowledge the racism and police violence that started this and has been rife in our nation, that he exacerbates show he has no evidence of insight or remorse,” Sister Campbell said.

“This is crass politics at its worst,” she added. “It’s ignoring the reality of our nation. This is not about religious liberty. This is about human life, human dignity and police violence.”

The Trumps’ stay at the shrine lasted about 20 minutes. At one point the couple exited the shrine and posed for pictures next to a statue of St. John Paul II bedecked with a wreath of red and white flowers and a red, white and blue ribbon.

They turned to stand in front of the statue for a minute and faced photographers again before returning indoors.