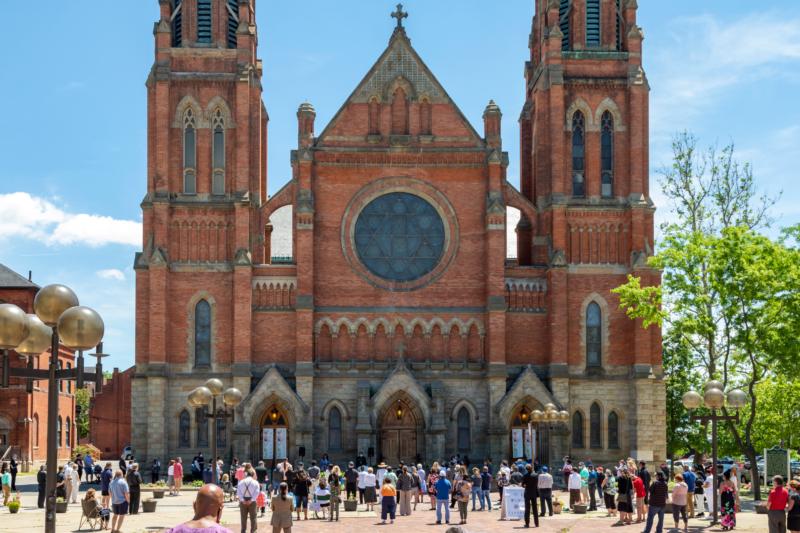 Archbishop Allen H. Vigneron of Detroit prays the rosary with faithful outside the Basilica of Ste. Anne de Detroit June 7, 2020. Demonstrations continue after a white police officer in Minnesota was caught on a bystander’s video May 25 pressing his knee into the neck of George Floyd, an African American, who was later pronounced dead at a hospital. (CNS photo/Jim West)

WASHINGTON (CNS) — Bishops called for Americans to celebrate the country’s diversity, prayed the deep sin of racism can be overcome and invited people to remember that each person is a unique creation of God in Trinity Sunday homilies, messages and events.

“Our diversity should never be considered a problem that needs to be solved, or something that divides,” Bishop Gregory L. Parkes of St. Petersburg, Florida, said during a “Holy Hour for Peace, Healing and Change” at the Cathedral of St. Jude the Apostle June 7.

In Boston, Cardinal Sean P. O’Malley called racism a “social and spiritual disease that kills people” in a letter read at parish Masses, saying that Catholic social teaching provides the inspiration to guide the church in addressing any form of discrimination and to assure justice for all people.

About 50 members of St. Aloysius-St. Agatha Parish in Cleveland were joined by neighborhood residents as they gathered in front of their parish church on a busy inner-city street after Sunday Mass to pray for racial understanding and an end to racism and police violence toward African Americans.

The events occurred as tens of thousands of Americans joined peaceful demonstrations, rallies and vigils the weekend of June 6-7 in response to the death of George Floyd, a 46-year-old African American man who died while pinned to the ground by a white Minneapolis police officer on Memorial Day.

“If you are someone who has struggled for breath because of the oppression of racism, I want you to know I see you, I hear you and I pray for you,” Bishop Parkes said during the holy hour. “This is not what God intended for his beloved children. As we gather here today in this cathedral and outside, we can breathe. And we can speak. And we can pray. And we can act.”

The prelate reminded those gathered that each person is unique and that God invites people to “live in communion with one another” in a relationship of mutual love and respect, which reflects our dignity as children of God.”

“Our diversity should never be considered a problem that needs to be solved, or something that divides us,” he said. “Rather diversity should be seen as a reality that celebrates God’s love in the wonder of his creation.” 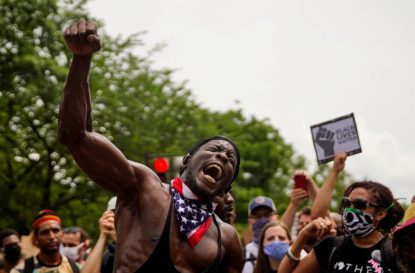 A demonstrator in Washington reacts during a protest against racial inequality June 6, 2020. Demonstrations continue after a white police officer in Minnesota was caught on a bystander’s video May 25 pressing his knee into the neck of George Floyd, an African American, who was later pronounced dead at a hospital. (CNS photo/Eric Thayer, Reuters)

In his letter, Cardinal O’Malley acknowledged the U.S. Catholic Church had its own “historical complicity in slavery” and must be part of any effort to ensure healing among people of different races, nationalities and religions.

“Going forward, the reality of racism in our society and the moral imperative of racial equality and justice must be incorporated in our schools, our teaching and our preaching,” Cardinal O’Malley said. “We must uphold commitments to equal dignity and human rights in all institutions in our society, in politics, in law, economy, education.

“Catholic teaching on social justice measures the way a society acts fairly or not. Our work will not be done until African American men, women and children are treated equally in every aspect of life in the United States,” he said.

The parish, she told Catholic News Service, has supported black-owned businesses throughout the lockdowns that resulted from the novel coronavirus pandemic and the prayer service seemed to be “the next step” to address the concerns people have had as demonstrations emerged across the country.

Women religious from the Ursuline and Sisters of Notre Dame communities who work at the parish and minister to the neighborhood donned black T-shirts adorned with “Nuns for Justice” in white lettering for the vigil to demonstrate support for people who have felt the sin of racism.

Elsewhere, San Diego Bishop Robert W. McElroy said during a Mass with Catholic African Americans at Immaculata Church June 6 that God’s creation provides the foundation on which to overcome racism and to understand the unity of the human family.

He said that while God provides a “loving plan for human history and solidarity and Jesus accompanies the faithful through his own suffering and demands to accompany others in their agony, “it is the Spirit who breathes on us as disciples and as a community of faith to renew the face of the earth.”

“This moment in our nation’s long crucifixion of the African American community must not be merely an interlude. It must be a moment of transformation. When the Spirit of God descended upon the Apostles on Pentecost, they were timid, lost and fearful. But with the Spirit in their midst, they transformed the whole of the world,” Bishop McElroy said.

Bishop Robert P. Deeley of Portland, Maine, said the Holy Trinity can “teach us more about the recent tragic death of George Floyd, the massive outpouring of anger and grief that has followed, and what is next.”

He explained how he was on a walk when he came upon a group of black children playing and on the sidewalk nearby they had created a colorful image of what the term “black lives matter” means to them.

“I thought to myself why, ever, would these beautiful children ever think that their lives do not matter? Yet, when we talk to black people, they share with us that the do not believe our society values them,” he said.

“Systematic racism begins in the attitudes of the individuals in a society. And, therefore, overcoming racism will begin with each person reflecting and acting personally, to change their view. Society will change when we change,” Bishop Deeley added.

He then called on Catholics “to affirm their commitment to foster respect and justice for all people.”

In Detroit, in the plaza outside the Basilica of Ste. Anne de Detroit, Archbishop Allen H. Vigneron led a group of people in praying the rosary to end racism.

On May 29, the archbishop sent a letter to the city’s black Catholics in which he acknowledged the “deep familiar and soul-crushing ache” that had been awakened by Floyd’s mistreatment and death.

Prior to the Trinity Sunday Masses Archbishop Paul D. Etienne of Seattle joined the city’s faith leaders on the steps of St. James Cathedral June 5 to pray and reflect on racism in society and religious communities.

As the cathedral’s bell tolled, the leaders also observed nearly nine minutes of silence to mark the period of time that Floyd was pinned to the ground with the police officer’s knee on his neck.

In Erie, Pennsylvania, Bishop Lawrence T. Persico joined faith and political leaders during a 75-minute rally and march June 6 through the city’s downtown to protest systematic racism and police violence against minorities.

Martin Gugino, 75, of Amherst, New York, a member of the Catholic Worker Movement, was injured June 4 when he fell and struck his head. A longtime peace activist, Gugino was described by a friend as a “gentle person,” The Buffalo News reported.

The two officers, later identified as Robert McCabe and Aaron Torgalski, were suspended and have now been charged with felony assault.