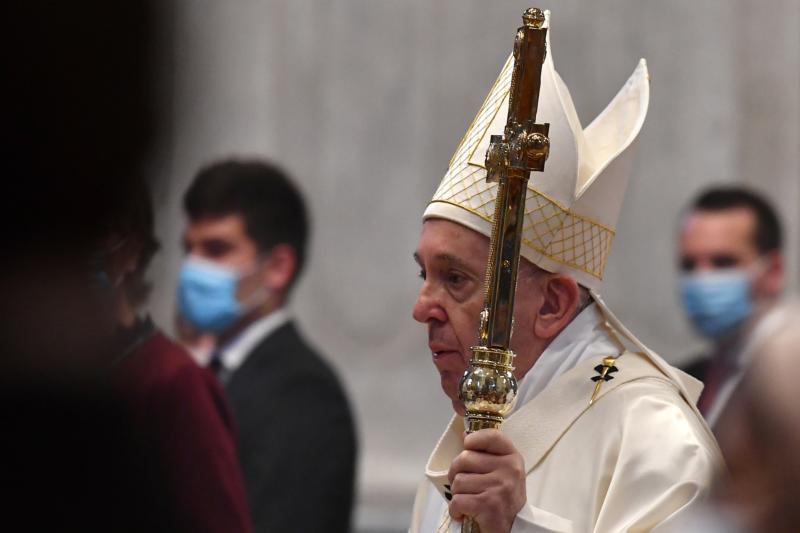 Pope Francis arrives to celebrate Mass marking the feast of Corpus Christi in St. Peter's Basilica at the Vatican June 14, 2020. The Mass was celebrated with a small congregation of some 50 people as part of efforts to contain spread of the coronavirus. (CNS photo/Tiziana Fabi, Reuters pool)

VATICAN CITY (CNS) — The Eucharist heals people of their wounds, emptiness and sadness, and gives them the strength to share Christ’s loving mercy with others, Pope Francis said.

The joy of the Lord can change lives, the pope said in his homily during Mass June 14, the feast of the Body and Blood of Christ.

“This is the strength of the Eucharist, which transforms us into bringers of God, bringers of joy, not negativity,” he said during the morning Mass, which was celebrated in St. Peter’s Basilica with a small congregation of about 50 people, the majority of whom wore masks and maintained social distance.

Drastically reducing the size of the congregation and not holding a traditional outdoor Corpus Christi procession after Mass were part of the ongoing efforts to contain the spread of the coronavirus.

Over many decades, popes have celebrated the feast either in different neighborhoods in and around Rome or at the Basilica of St. John Lateran followed by a one-mile procession to the Basilica of St. Mary Major. The solemn procession, in which the pope or a priest carried a monstrance containing the Blessed Sacrament through the streets, would be lined with thousands of people.

For the feast day celebration June 14, however, the entire ceremony was held inside St. Peter’s Basilica and concluded with a long moment of silent eucharistic adoration and Benediction of the Blessed Sacrament. The feast of the Body and Blood of Christ celebrates the real presence of Christ in the Eucharist.

In his homily, Pope Francis said, “The Lord, offering himself to us in the simplicity of bread, also invites us not to waste our lives in chasing the myriad illusions that we think we cannot do without, yet that leave us empty within.”

Just as the Eucharist satisfies the hunger for material things, it also kindles the desire to serve others, he said.

“It raises us from our comfortable and lazy lifestyle and reminds us that we are not only mouths to be fed, but also his hands to be used to help feed others.”

“It is especially urgent now to take care of those who hunger for food and for dignity, those without work and those who struggle to carry on,” the pope said. “This we must do in a real way, as real as the bread that Jesus gives us,” and with real solidarity and genuine closeness.

Pope Francis also spoke about the importance of memory in order to stay rooted in the faith, united as a community and part of a “living history.”

God helps by leaving “a memorial,” that is, “he left us bread in which he is truly present, alive and true, with all the flavor of his love” so every time people receive him, they can say, “He is the Lord; he remembers me!”

The Eucharist, he said, also heals the many ways one’s memory may be wounded.

“The Eucharist first heals our orphaned memory,” caused by a past darkened by a lack of affection and “bitter disappointments caused by those who should have given them love and instead orphaned their hearts.”

The past cannot be changed, he said, however, God can heal those wounds “by placing within our memory a greater love — his own love,” which is always consoling and faithful.

Through the Eucharist, Jesus also heals “negative memory,” which harbors all the things that have gone wrong and leaves people thinking they are useless or only make mistakes.

“Every time we receive him, he reminds us that we are precious, that we are guests he has invited to his banquet,” the pope said.

“The Lord knows that evil and sins do not define us; they are diseases, infections. And he comes to heal them with the Eucharist, which contains the antibodies to our negative memory,” he said.

Only love can heal fear at its root “and free us from the self-centeredness that imprisons us,” he said.

Jesus approaches people gently, “in the disarming simplicity of the host,” as bread that has been broken “in order to break open the shells of our selfishness,” he said.

After Mass, the pope greeted a few hundred people spread out in St. Peter’s Square for the noon recitation of the Angelus prayer.

After the prayer, he expressed his deep concern for the ongoing conflict in Libya, urging “international bodies and those who have political and military responsibilities to recommence with conviction and resolve the search for a path toward an end to the violence, leading to peace, stability and unity in the country.”

“I also pray for the thousands of migrants, refugees, asylum seekers and internally displaced persons in Libya” as health conditions have deteriorated, making them even more vulnerable to exploitation and violence, he said.

The pope called on the international community to find ways to provide them with “the protection they need, a dignified condition and a future of hope.”

After civil war broke out in Libya in 2011, the country still finds itself divided between rival leaders, each one supported by militias and foreign governments.