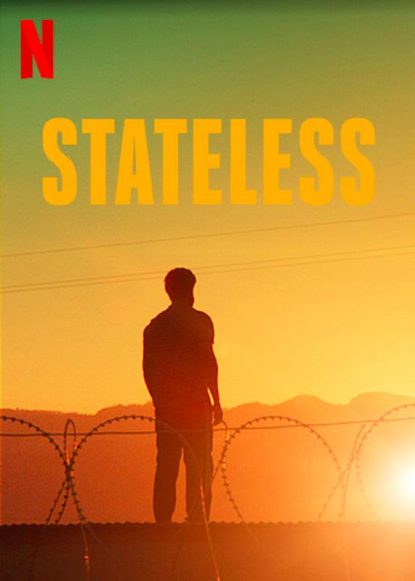 This is the TV poster for “Stateless” now streaming on Netflix. (CNS/Netflix)

NEW YORK (CNS) — According to recent United Nations statistics, roughly 71 million people globally have been displaced from their homes. Of these, a record number — 30 million — have become refugees as a result of such factors as war, famine, drought, genocide, gang violence, terrorism, religious persecution, sex trafficking and climate change.

By recalling a chapter from recent history, the limited series drama “Stateless” highlights the plight of some of these desperate souls. Having premiered on Australia’s ABC in March, the program is available now on Netflix.

For 10 months between 2004 and 2005, Cornelia Rau, a German citizen but permanent resident of Australia suffering from mental illness, was unlawfully imprisoned under the Australian government’s policy of mandatory detention.

The multilayered story gets off to a shaky start as viewers are introduced to its stand-in for Rau, single flight attendant Sofie Werner (Yvonne Strahovski). Though Sofie appears happy, her confidence is shaken when she returns to her family home for Christmas dinner.

Pressured by her relatives to find a spouse and improve her career track, rattled Sofie makes her escape and finds herself in a dance hall, listening to motivational speaker Pat Masters (Blanchett). Pat and her husband, Gordon (Dominic West), are busy promoting their ludicrously expensive self-help program, which involves taking dancing lessons to improve self-esteem.

Sofie is willing to give it a try. But sinister Gordon’s unwanted advances cause her to bolt once again and contribute to a mental breakdown.

This incident is intended to parallel Rau’s experience with Kenja Communication, a group with a similar philosophy. The fictional version is undercut, however, by the fact that Strahovski seems far too glamorous to be so drastically lacking in self-assurance.

The strand of the plot involving native Afghan Ameer (Fayssal Bazzi) will be more compelling to viewers. Having witnessed the execution of their fellow citizens at the hands of the Taliban regime, Ameer, his wife, Najeeba (Saajeda Samaa), and their daughters, Mina (Soraya Heidari) and Sadiqa (Ilaha Rahemi), escape to Pakistan, hoping eventually to reach Australia.

Instead of starting a new life there, though, Ameer ends up confined in the fictitious Barton Detention Center in the South Australian desert, where Sofie is also housed.

Bazzi skillfully conveys his character’s conflicted, anguished, weary yet determined state of mind. And “Stateless” as a whole works well when it emphasizes how facilities like Barton not only dehumanize the people who are held in them but those who work there as well.

This second reality is personified in guard Cam Sandford (Jai Courtney). He views his newly acquired position at Barton as the means of securing a better way of life for his family.

Easygoing initially, he wants to believe what his supervisor, Brian Ashworth (Darren Gilshenan), tells him on his first day at Barton: “It’s not a prison. We have a duty to care for the unlawful noncitizens. Their dignity must be upheld.”

Yet as those supposedly in his care understandably grow ever more restive, Cam becomes increasingly aggressive toward them. In one horrifyingly indelible moment, the officer’s behavior at work mirrors his abusive treatment of his young children at home.

In keeping with its mature themes, including murder, sexual assault and adultery, depictions of violence and coarse language, “Stateless” is rated TV-MA — mature audience only. None of these elements, however, seem gratuitous or overdone.

Though it’s a mixed bag, “Stateless” does succeed in underscoring how global efforts to deal with refugees have so far tended to fail all involved.