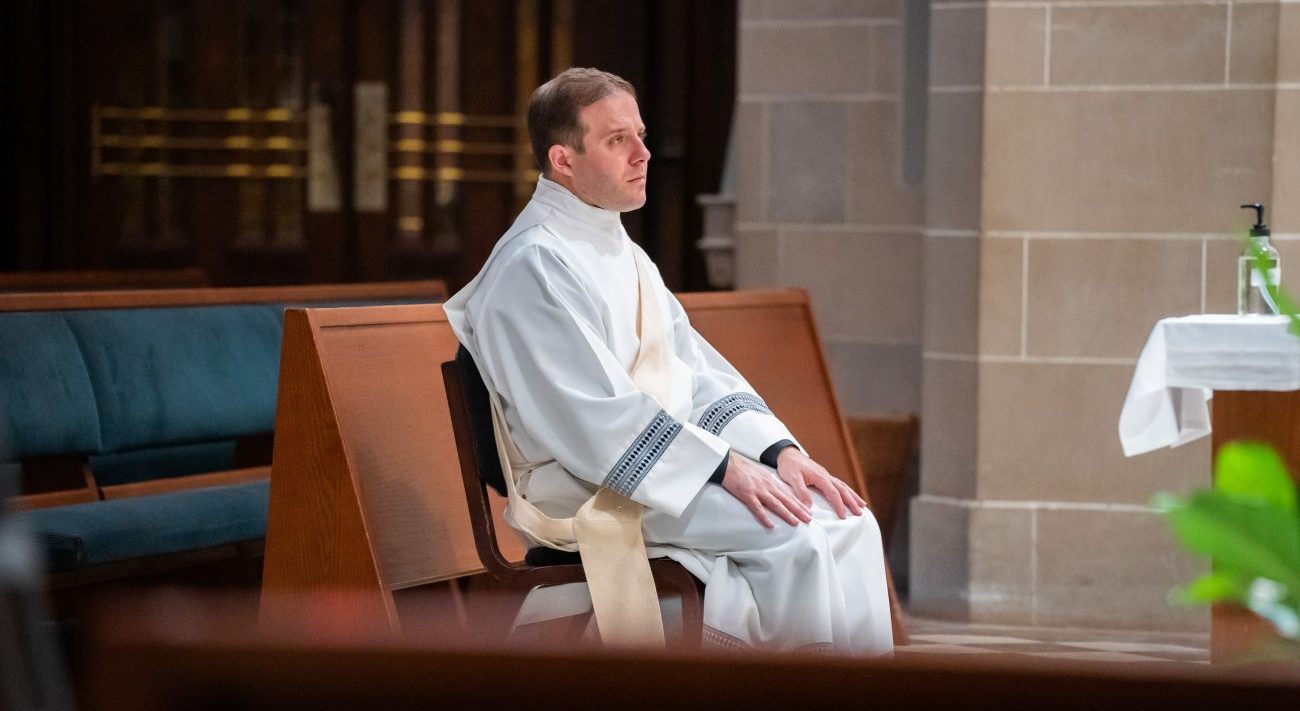 Father Matthew Hood is seen at the Cathedral of the Most Blessed Sacrament in Detroit Aug. 17, 2020. Father Hood was validly ordained a priest two weeks after he discovered he was not properly baptized 30 years ago. (CNS photo/Valaurian Waller, Detroit Catholic)

DETROIT (CNS) — The Archdiocese of Detroit is seeking to contact anyone who may have received invalid sacraments after a priest of the archdiocese learned his own baptism as an infant 30 years ago was invalid.

On Aug. 6, the Vatican’s Congregation for the Doctrine of the Faith issued a note clarifying that baptisms using an improper formula — namely, those using the phrase “We baptize you …” instead of the church’s ancient formula, “I baptize you in the name of the Father, and of the Son, and of the Holy Spirit,” are not valid.

Father Matthew Hood, associate pastor of St. Lawrence Parish in Utica, contacted the Archdiocese of Detroit after discovering that his own baptism, captured on video in 1990, used improper wording.

Because the sacraments of confirmation and holy orders can only be conferred upon validly baptized Catholics, Father Hood was “devastated” to learn that not only was he not baptized or confirmed, but he also was not a validly ordained priest.

“There was definitely shock and sadness at finding out 30 years later that I was never baptized. It was an alienating sense that even though I was following the Lord, I wasn’t a Christian, and I wasn’t a priest and I wasn’t a deacon,” he told the Detroit Catholic, the online news outlet of the Archdiocese of Detroit.

As a consequence of the invalid baptism, Father Hood lacked the ability to confer most sacraments since he thought he was ordained in 2017, Archbishop Allen H. Vigneron said in an Aug. 22 letter to Catholics in the archdiocese.

“The parishes where Father Hood has been assigned — Divine Child in Dearborn and St. Lawrence in Utica — will be working with the archdiocese to contact those who sought out the sacraments with Father Hood, so that each individual’s circumstance may be examined and rectified,” the archbishop said.

According to a news release from the archdiocese, Father Hood’s family presented him for baptism at St. Anastasia Parish in Troy in 1990, where Deacon Mark Springer was presiding. Deacon Springer attempted to baptize him using the words, “We baptize you …” instead of the church’s prescribed formula.

Although there had been questions about the altered formula, the Vatican’s doctrinal note put all confusion to rest.

A graduate of Sacred Heart Major Seminary, Father Hood said he was shocked when he learned the consequences, and immediately reached out to the archdiocese, which worked quickly to remedy the situation. On Aug. 9, he was validly baptized, confirmed and received the Eucharist, and after a week on retreat, he was ordained a transitional deacon and a priest two days later on Aug. 17.

“The archbishop called me, and I could tell he was even more concerned about it than I was, and I was very concerned about it,” Father Hood said. “To know of his pastoral care for me, for my vocation, was a huge grace from the very beginning.”

Now, the archdiocese is attempting to contact anyone else who might have been invalidly baptized by Deacon Springer, who served at St. Anastasia from 1986 to 1999, or who received invalid sacraments from Father Hood, who served at Divine Child Parish in Dearborn from July 1, 2017, to July 1, 2020, and since then at St. Lawrence. Deacon Springer is retired and is not currently in active ministry.

Although Father Hood was not able to validly perform some marriages, celebrate Mass, grant absolution, administer confirmation or anoint the sick, any baptisms he performed are presumed valid, since a priest is not required to baptize so long as the correct formula, matter and intention are present, said Father Stephen Pullis, director of evangelization and missionary discipleship for the archdiocese.

“Some of the things Father Matthew did were invalid, but his baptisms were valid because you don’t need to be a priest to perform baptism,” Father Pullis said, although the church strongly prefers a priest or deacon except in cases of emergency. “If someone was baptized by Father Matthew, they should have no doubt their baptism was valid.”

For other sacraments, people can use an online form to contact the archdiocese and find out if any action is needed. “People can submit questions, and myself or another priest will be able to accompany the individual in walking through how to understand whether this was a valid sacrament or not,” Father Pullis said.

Though some might be tempted to view the matter as a technicality, the language used in conferring a sacrament is deeply important, he added.

“When someone is baptized, it’s not just a symbol or recognition of something that’s already happened. It’s actually making a change in the person,” Father Pullis said. “Because the sacraments actually bring about an effect, we have to be very precise in both the words, the form, and the matter, the objects, that we use.”

“That means we have to do it in the way the church tells us to do it,” he continued. “We can’t use Mountain Dew or milk instead of water, and we can’t use other words, like ‘I baptize in the name of the Creator …’ or ‘We baptize …’ instead of the words the church gives us.”

The church uses the phrase “I baptize” to signify that the person baptizing is standing in the place of Christ, Father Pullis said, not the community.

“It is always a personal act of the church when a sacrament is conferred,” the priest said. “God uses individuals to communicate the grace that the sacraments offer — in this instance, the sanctifying grace that baptism offers.”

“We can be assured that all those who approached Father Hood, in good faith, to receive the sacraments did not walk away empty-handed,” Archbishop Vigneron wrote. “We know that Our Lord, in his unending love for us, supplied some measure of grace. God is drawn to hearts that are open to Him in love.”

The archbishop apologized for the “human error” that led to the disruption of the sacramental life of some of the faithful and pledged to rectify the situation.

While Father Hood is still bewildered, he said his heart “aches” for those whose sacraments were invalid because of his situation, but said he wants to help in any way he can — especially now that he’s a validly ordained priest.

“As a priest, I want to be able to reach out to them and tell them this is something that’s very strange and probably painful, but I’ve gone through this as well, and I want to help you to remediate this problem so we can be certain you’ve received the grace of the sacraments,” he said.

While he might not have been a priest for the past three years — or even a Catholic, for that matter — that doesn’t mean God was silent or absent, he added.

“It’s a grace to realize that God is not a liar. Any experience of the sacraments, even if they were celebrated invalidly, God was still active in some mysterious way and God still honors the dispositions of those who were there in some way,” Father Hood said.

Stechschulte is editor-in-chief of Detroit Catholic, the online news outlet of the Archdiocese of Detroit.