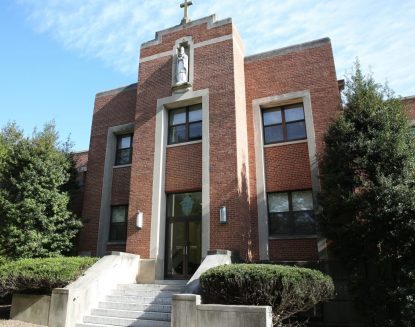 The Archdiocese of Washington’s Pastoral Center is seen in this file photo. It is located in Hyattsville, Md. (CNS photo/courtesy Jaclyn Lippelmann, Catholic Standard)

WASHINGTON (CNS) — The Archdiocese of Washington’s Pastoral Center announced a restructuring plan Aug. 21 due to reduced financial support amid the economic downturn of the COVID-19 pandemic.

The archdiocese’s restructuring includes termination of 17 current employees’ positions, reduced hours for 17 employees and the elimination of 14 vacant positions. The pastoral center had 210 full-time workers before this change.

The archdiocese is also decreasing operational budgets, canceling planned upcoming events and reducing the number of print editions and the publication frequency of the Catholic Standard and El Pregonero newspapers, which are both shifting from biweekly to monthly print schedules while continuing to post new content online.

According to the archdiocese, implementing these structural changes will cut costs by 10 percent — approximately $4 million in operating funds — during this fiscal year, which began July 1.

“No one could have envisioned the impact of the virus,” said Father Daniel Carson, vicar general and moderator of the curia for the archdiocese who joined Washington Archbishop Wilton D. Gregory in speaking to pastoral center employees in an Aug. 21 conference call when the cuts were announced. The individual employees impacted by the restructuring were notified after the conference call.

Archbishop Gregory noted that “right now we are in an awful moment, because resources we planned on having and resources we depend on” fell sharply during the pandemic.

Father Carson said prior to the coronavirus shutdown, the average weekly offertory donations at parishes in the archdiocese was about $1.5 million, but then it dropped to just over $1 million in the March to May time frame. He said that 30 percent reduction significantly reduced assessments to the pastoral center, which are the second largest source of revenue to fund its operations and ministries, with the archdiocese’s Annual Appeal providing the largest source of funding.

The pastoral center supports and oversees 139 parishes and nine missions, 91 Catholic schools and affiliated agencies of the archdiocese.

When public Masses were suspended and Catholic school campuses were closed on March 13, the pastoral center also closed and archdiocesan employees worked remotely.

In the early months of the shutdown, the pastoral center and archdiocesan parishes were able to continue their operations with the help of funding from the federal government’s Payroll Protection Program, but those funds ran out in mid-July and have not been renewed by Congress.

In a letter sent to priests of the archdiocese, Archbishop Gregory said he has “never seen anything like what we are witnessing with this pandemic. It has impacted almost every aspect of our lives, changing how even the simplest routines must now be performed.”

He said pastors have told him about the financial hardships they are experiencing with reduced offertory collections. He also noted that as Payroll Protection Funds have been spent, many parishes and schools are restructuring their operations to limit their deficits.

In an Aug. 24 interview, Father Carson noted that before entering the seminary, he had worked at the White House and Wall Street and had witnessed how restructurings impacted people.

“On Wall Street when financial downturns happen, it (restructuring) is expected. For the church, it’s not a normal expectation,” he said. “It impacts us like a family.”

The priest also stressed the importance of being “good stewards of the resources entrusted to our care. Our goal was to make sure whatever restructuring entails, that we would be able to still care for the parishes, schools, priests and people of the church and its ministries.”

The archdiocesan administrator said employees who lost their jobs will receive severance pay and medical benefits for a period of time and will be offered outplacement services to help them find employment.

“Besides looking at the bottom line, we looked at what is our short-term and long-term mission in the archdiocese, and how we can best fulfill the mission. This situation has given us an opportunity to reflect on what our core mission as church is, and how, together, we can best accommodate it given the uncertainty in which we’re living.”