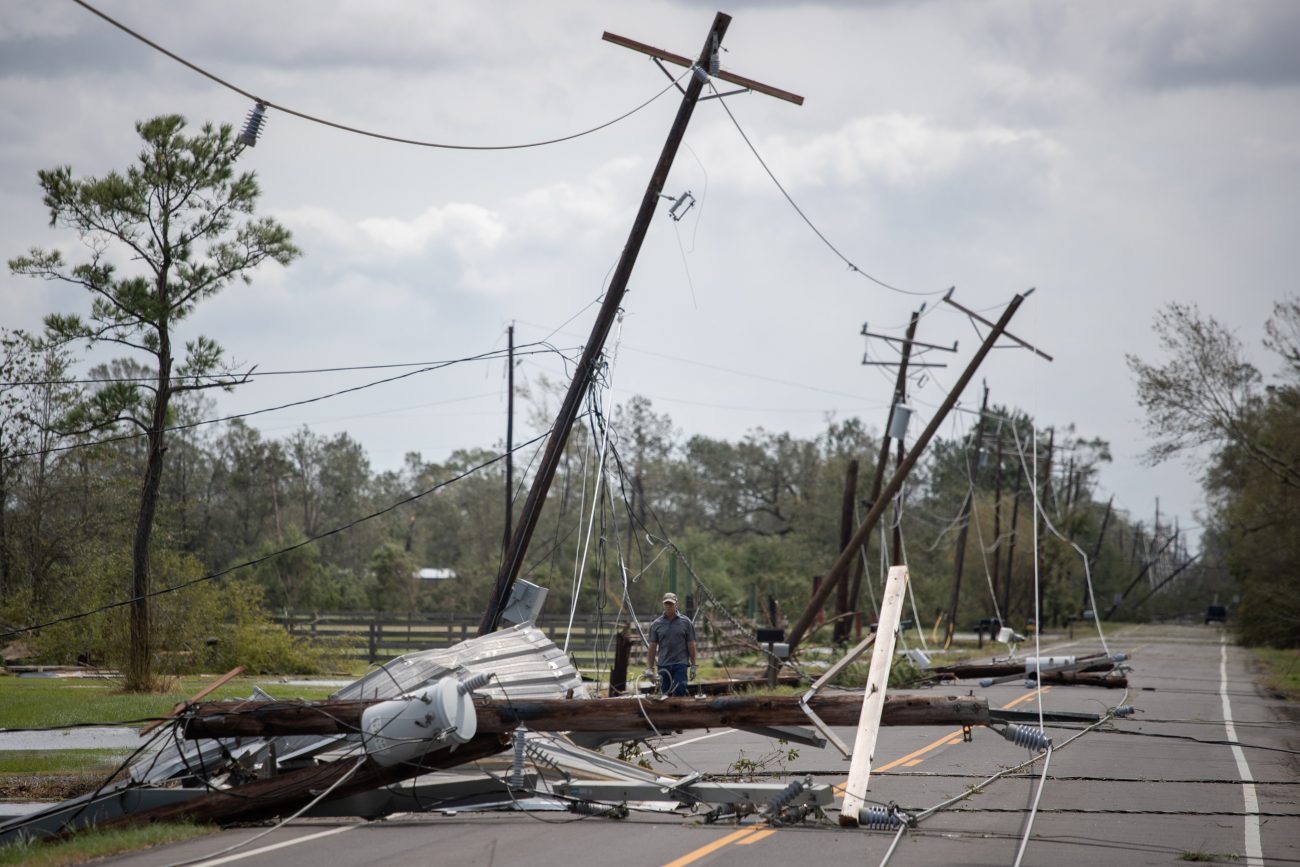 A man in Sulphur, La., walks past fallen electrical lines to get to his residence in the aftermath of Hurricane Laura Aug. 27, 2020. (CNS photo/Adrees Latif, Reuters)

WASHINGTON (CNS) — After a hurricane made landfall with winds of 150 mph along the Texas-Louisiana border early on Aug. 27, bishops from the dioceses in its path found themselves the morning after assessing damages and checking in with others hours after destructive Hurricane Laura had passed.

Bishops from the dioceses of Beaumont, Texas, and Lake Charles, Louisiana, issued brief statements via Facebook with few details about the extent of the damage.

“We made it through the night here in Beaumont, waiting to hear from the eastern side of our diocese, which took a much worse hit, as did our brothers and sisters in Southwest Louisiana,” said Bishop David L. Toups Aug. 27 on Facebook. “But I have to say, pretty miraculous on our end! Keeping all those affected by Laura in my prayers. Giving thanks to God that so many were spared her wrath.”

At least four deaths attributed to Hurricane Laura, described as one of the most powerful storms the country has ever experienced, were reported by midday Aug. 27.

Southwest Louisiana, where the Diocese of Lake Charles is located, suffered some of the most extensive damage, and authorities were scrambling to get information out to the surrounding communities about a chemical fire, which seems to have been caused by storm damage, even as many remained without power.

“We have seen the destruction and experienced the wind and water,” wrote Bishop Glen J. Provost of Lake Charles in his statement also posted on Facebook after the hurricane had passed. “As I prayed this morning, I remembered all of you in my prayers. Psalm 57 of the church’s morning prayer began with these words: ‘In the shadow of your wings I take refuge ’til the storms of destruction pass by.'”

Bishop Toups, who was installed as the new head of the Beaumont diocese five days before the hurricane, went out to visit the eastern part of his new diocese, which suffered the brunt of the damage. In a video posted on Facebook and taken near a fallen structure close to a destroyed shrine at St. Mary Catholic Church in Orange, Texas, he stood near a statue of the Sacred Heart of Jesus that was still standing.

“We have sustained damage, but nothing compared to our brothers and sisters in Lake Charles,” he said. “So, I really want all of us to pray for all of them in a very particular way. I stopped here because this little shrine Father (Joseph) Daleo, our pastor in Saint Mary’s, recently put together, I think is an amazing image of life for us right now in the midst of the mess, in the midst of the craziness, in the midst of the debris. Right here, standing firm, standing strong is Jesus and his sacred heart.

“Everything can fall apart around us but here is Christ standing firm. He is with us and so our message, especially to our brothers and sisters in Lake Charles, is to know that Christ is standing firm with us even in the midst of devastation and destruction. He is with us. We, in the Diocese of Beaumont, southeast Texas, have so much to be grateful for.”

Just before praying the Divine Mercy chaplet on Aug. 27, Bishop Toups said the diocese had sustained minimal damage, about 15 parishes suffered damage, eight had serious damage “but nothing catastrophic.” He said he would be praying to give thanks for lives spared and preservation of many parishes and homes in Beaumont.

“Our prayers go across the border to our friends in Louisiana,” he said.

Archbishop José H. Gómez of Los Angeles, president of the U.S. Conference of Catholic Bishops, said in an Aug. 27 statement that he was praying for the lives and safety of all those in the path of Hurricane Laura.

“On behalf of my brother bishops in the United States, I am praying for the safety and well-being of everyone in the path of Hurricane Laura. May God protect their families and their homes and their livelihoods. We pray especially for first responders and health care and emergency workers. I urge our Catholic faithful and all people of goodwill across the country to stand in solidarity with the communities that will be hard hit by this storm and to please be generous in providing assistance,” he said in the statement.

“We entrust all our brothers and sisters in harm’s way to the Immaculate Heart of Mary our Blessed Mother, and we ask her intercession to lessen the damage and ease the suffering caused by this storm.” 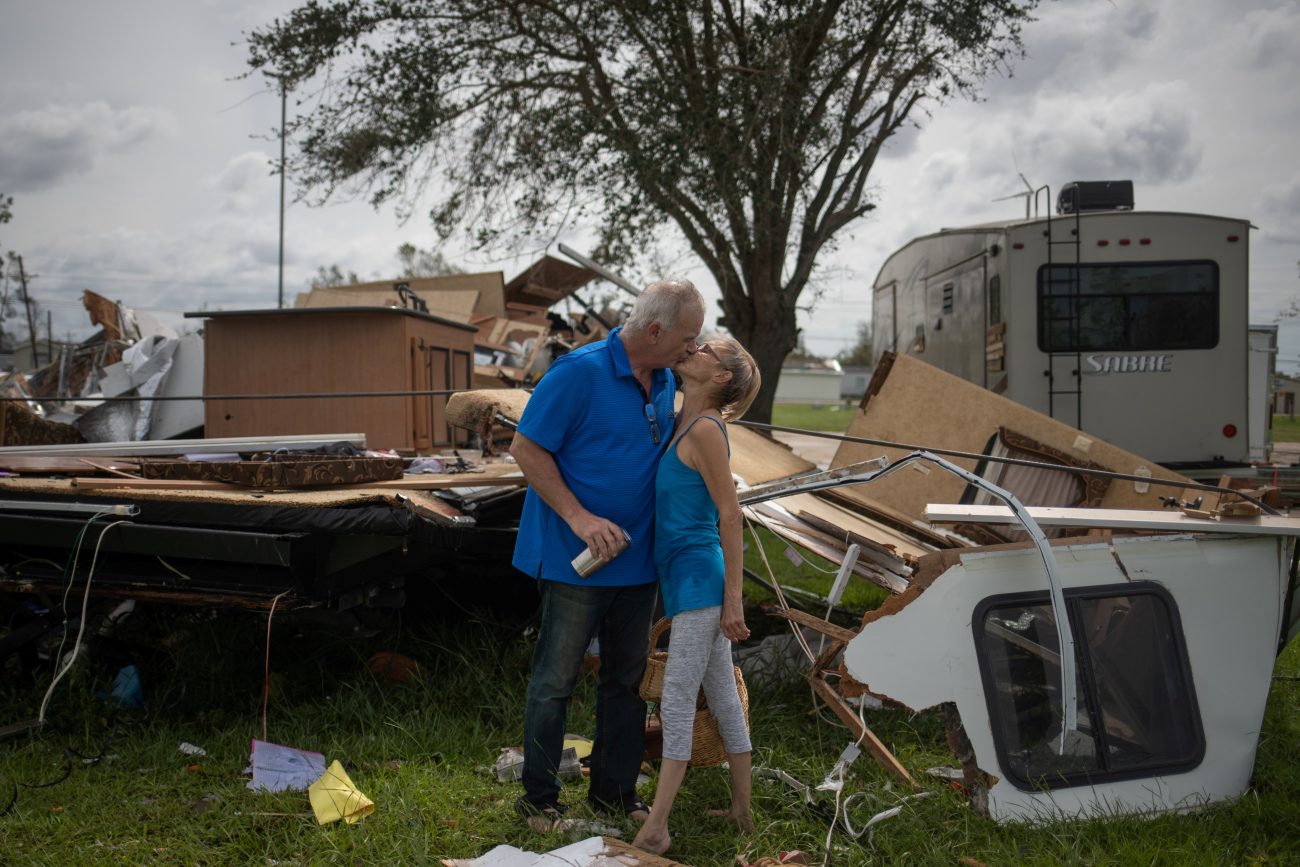 NEXT: Milwaukee archbishop prays for justice during visit to Wisconsin city