Milwaukee archbishop prays for justice during visit to Wisconsin city 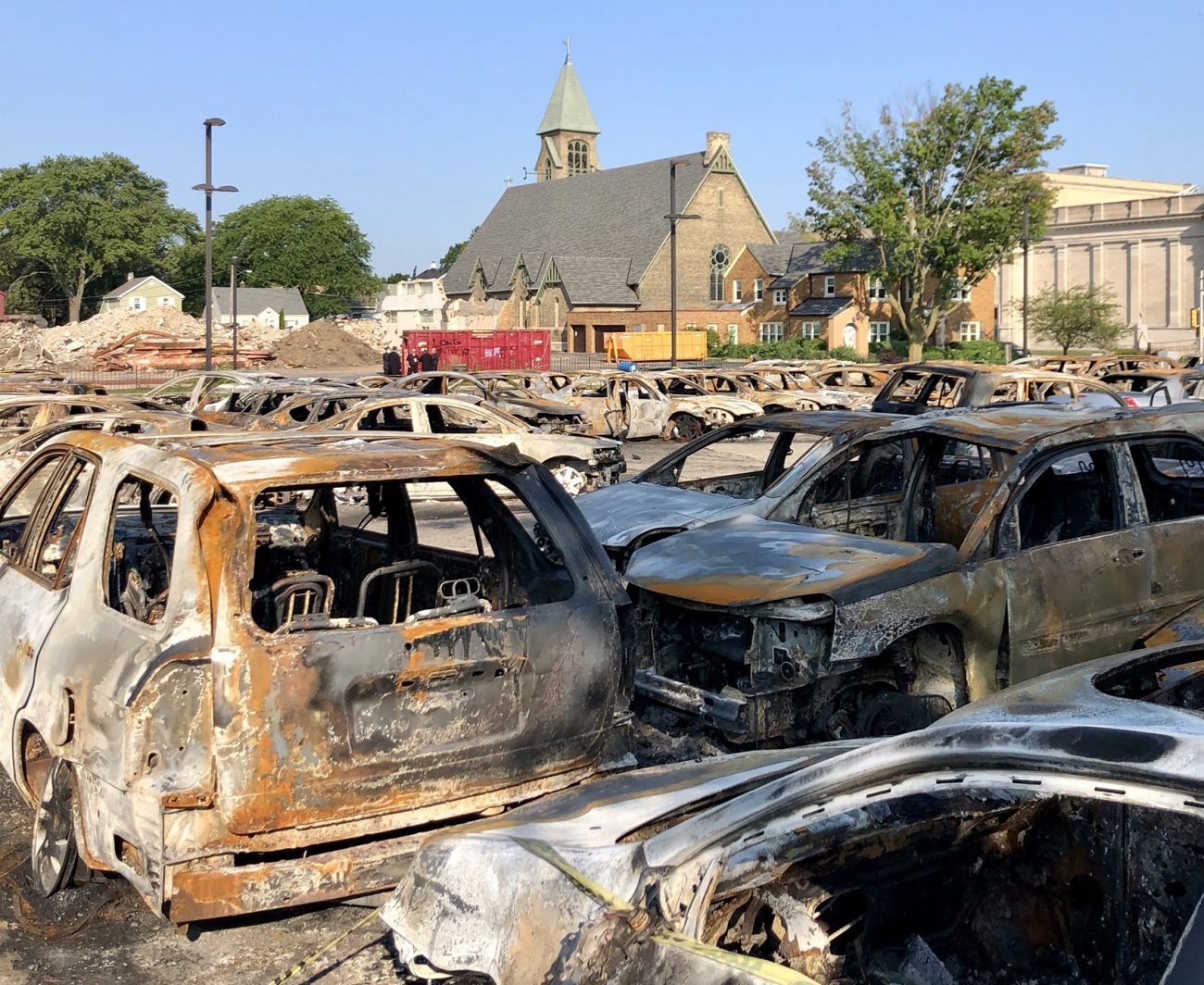 Burned out cars are seen Aug. 27, 2020 at a car dealership across the street from St. James Church in downtown Kenosha, Wis., following nights of protest in the city. The protests stemmed from the Aug. 24, 2020 shooting of Jacob Blake, a Black man, by police while three of his children looked on. (CNS photo/courtesy Jerry Topczewski, Archdiocese of Milwaukee)

CLEVELAND (CNS) — Milwaukee Archbishop Jerome E. Listecki prayed for peace and healing at several damaged sites during a visit to Kenosha, Wisconsin, the scene of four nights of demonstrations following the police shooting of a Black man.

The stops followed an early morning Mass Aug. 27 at St. Mark Church in Kenosha, a city of 100,000, an hour south of Milwaukee. In Kenosha, hundreds of people have been gathering nightly to protest the shooting of Jacob Blake, 29, a Black man shot seven times in the back by a police officer Aug. 23.

On the first three nights of protests, businesses, buildings and vehicles throughout the city were severely damaged.

Two protesters died and another was seriously wounded by gunfire at the demonstrations Aug. 25. Kyle Rittenhouse, 17, of Antioch, Illinois, has been charged with first-degree intentional homicide in connection with the gunfire. The teenager had posts on his social media accounts showing support for pro-police causes.

The protests remained largely peaceful the night of Aug. 26.

The Mass in Kenosha to pray for the city was organized by the pastors of the city’s nine parishes who wanted to express their support for all people of the community, said Jerry Topczewski, the archbishop’s chief of staff.

“The priests really brought it together themselves with their vicar general, Father Jim Lobacz, saying we’d like to celebrate a Mass for the people of Kenosha,” Topczewski told Catholic News Service.

Archbishop Listecki readily agreed to the Mass late Aug. 26 after hearing from Father Lobacz, he added.

Meanwhile, the chairman of the U.S. bishops’ Ad Hoc Committee Against Racism called all Catholics to respond to the demonstrations on behalf of racial justice in Kenosha and other cities by observing Aug. 28 or Sept. 9, the feast of St. Peter Claver, as a day of fasting and prayer.

Bishop Sheldon J. Fabre of Houma-Thibodaux, Louisiana, said Aug. 28 was chosen because the day marks the 57th anniversary of the 1963 March on Washington during which the Rev. Martin Luther King Jr. gave his “I Have a Dream” speech.

“On this Friday’s anniversary, in the midst of our country’s ongoing racial unrest, we restate our commitment to peacefully seeking racial justice,” he said.

The bishop urged Catholics to consider attending Mass on either Aug. 28 or Sept. 9 to offer reparation for the sins of racism. 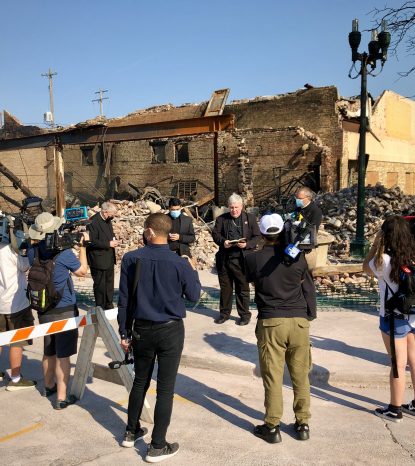 Archbishop Jerome E. Listecki of Milwaukee prays Aug. 27, 2020, at one of the Kenosha, Wis., sites destroyed during violent protests that followed the shooting of Jacob Blake, a Black man, by police four days earlier. Authorities said Blake was shot seven times in the in the back Aug. 24 as while three of his children looked on. (CNS photo/courtesy Jerry Topczewski, Archdiocese of Milwaukee)

After the Mass in Kenosha, Archbishop Listecki addressed reporters outside of the church, saying the first action of Catholics in response to the protests and injustice is to pray.

Topczewski said the bishop told them that through prayer “God has the ability to change minds and hearts.”

“He reminded the media that the secular world has pushed the church aside, that the church has an important role to play in communities and needs to be included in solutions,” Topczewski said.

“The archbishop also said we can’t rush to judgment. We have to step back and see the whole picture. We’re praying for healing and justice to come forth,” he said.

The archbishop visited several sites, including a car dealership across the street from St. James Parish in downtown Kenosha that had been torched, and Civic Center Park, where protesters had gathered and confronted police.

Father Sean Granger, pastor of St. James Parish, located a block from Civic Center Park, said several church windows had been broken by demonstrators and graffiti was also painted on the church.

One word, “burn,” had been sprayed onto the church building, raising a concern for the priest, who is also pastor of St. Elizabeth Parish, located about a mile north of St. James.

He told CNS he did not attend the Mass with the archbishop because he was meeting with a representative of a company to discuss removing the malicious graffiti.

The day after Blake was shot while three of his children looked on, Archbishop Listecki issued a statement saying he found it “difficult to imagine the pain, fear and anger felt by all where present” during the confrontation. “I pray for healing for Jacob Blake and for comfort for his family and loved ones.”

The archbishop also offered prayers for peace in Kenosha. “Violence can never be the means to attain peace and justice,” he said. “The church stands as a beacon of hope. The sins of violence, injustice, racism and hatred must be purged from our communities with acts of mercy, with the protection and care for the dignity of every human person, with respect for the common good, and with an unwavering pursuit of equality and peace.”

In his message, Bishop Fabre said the bishops “stand in solidarity” with Archbishop Listecki in his call to end violence in the pursuit of peace and justice.

Blake’s attorneys said Aug. 26 that he was partially paralyzed after a bullet damaged his spinal cord and that he had incurred other injuries. Family members also have implored demonstrators to end the violence and to protest peacefully.

NEXT: Nation is at ‘pivotal juncture’ in racial justice struggle, prelate says