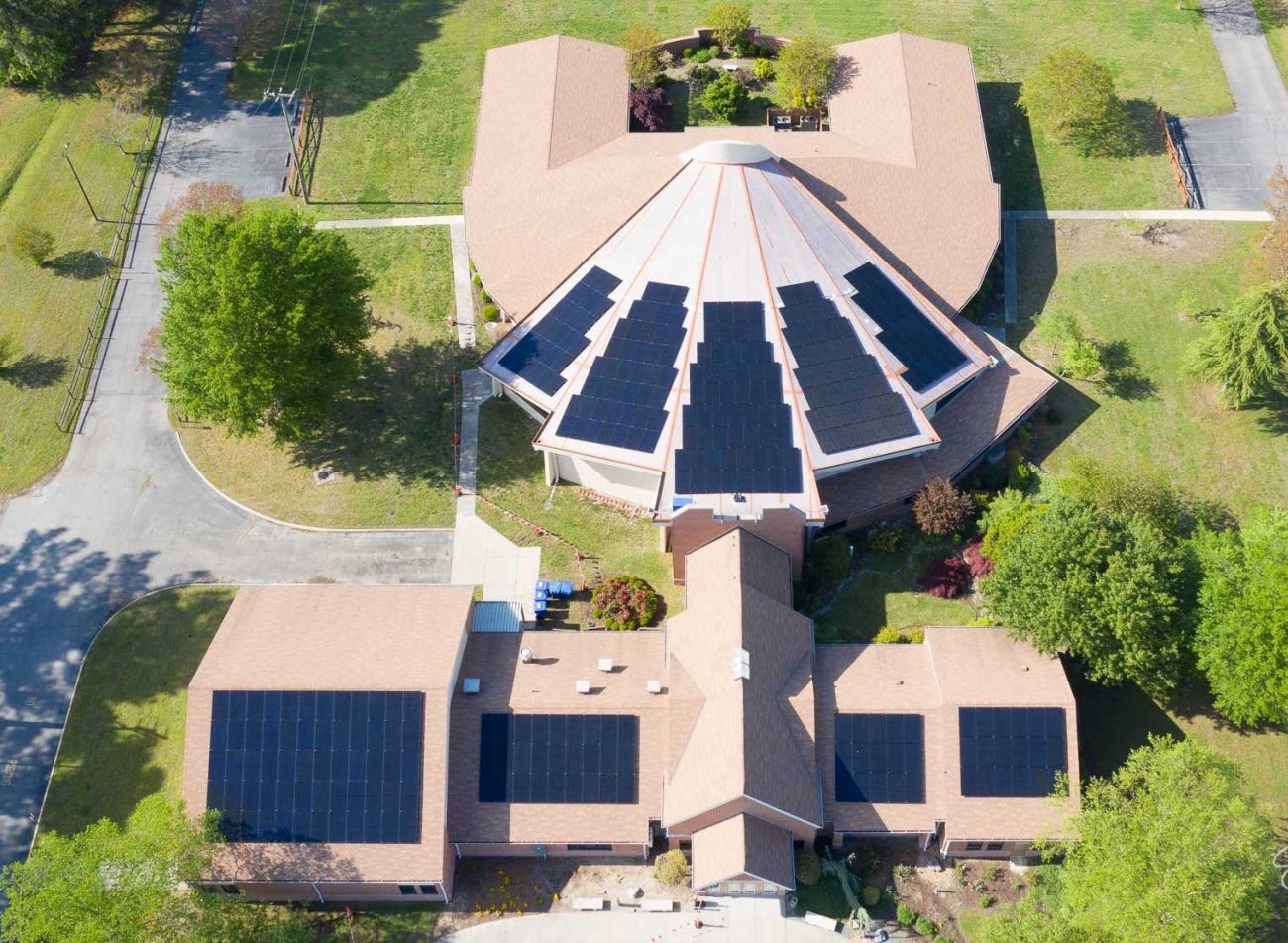 The Church of St. Therese in Chesapeake, Va., is one four churches in the Diocese of Richmond to have solar panels installed this year. Two schools and the diocesan pastoral center are also in the process of doing solar installations. (CNS photo/Vy Barto, Catholic Virginian)

Inspired by Pope Francis’ 2015 encyclical, “Laudato Si’, on Care for Our Common Home,” parishes and schools have partnered with Catholic Energies, a program of the Washington-based Catholic Climate Covenant, to integrate solar energy and other energy-saving tools into daily operations.

Catholic Energies projects the efforts will offset more than 45,000 metric tons of greenhouse gases — about that of an average passenger car driven 100 million miles — over the next 25 years.

“It is the best of both worlds. We can save money and care for the environment,” said Father Jonathan Goertz, pastor of Sacred Heart Parish in Danville, one of the churches joining the effort. “Whenever we can have our cake and eat it too makes us happy.”

In 2019, Immaculate Conception Parish in Hampton, became the first parish in the diocese to convert to solar energy. Now six parishes and schools are completing solar projects that will provide some of the electricity needed through solar power.

Other entities include Church of the Holy Family in Virginia Beach; Church of St. Therese in Chesapeake; Our Lady of Lourdes School in Richmond; Roanoke Catholic School; Sacred Heart Church School in Danville; and St. Pius X Church and School in Norfolk. The 45,000-square foot diocesan Pastoral Center in Richmond also will employ solar power for much of its electricity.

For the parishes and schools, solar power makes fiscal and environmental sense.

“It wasn’t just about money and how much money can we save but also our effect on the environment,” he explained. “It was about what kind of world we are leaving for future generations.”

Even if adopting solar power would not have resulted in substantial savings, some parishes said they still might have converted, at least partially, to cleaner energy.

“Our primary concern is the environment and taking better care of God’s creation. That’s the fundamental basis why we’re doing this,” said Father Kevin O’Brien, Church of St. Therese pastor. “Even if we didn’t raise a penny or we broke even, it was still worth it.”

Philip Kauneckas, a Sacred Heart parishioner collaborating with Catholic Energies on the project, agreed that the opportunity to be stewards of creation was the “driving force” of converting to solar power.

“Even if we break even, the project still would have been worthwhile because it is good for the environment,” Kauneckas said.

Charles Mikell, director of the Richmond Diocese’s Office of Real Estate, said his goal is for the diocese to be the “greenest” in the country. Employing solar energy is cost effective for 70% of the diocese’s 146 parishes and 26 schools, he said, adding that he hopes all will have solar energy within three years.

Page Gravely, who manages client services at Catholic Energies, said the Richmond Diocese appears to be “further along” that path than most dioceses.

Converting to solar power either partially or completely may seem daunting to some parishes and schools, but Catholic Energies works with Catholic institutions without charge from the beginning, performing an economic analysis to panel installation and activation, Gravely said. The entire process usually lasts six months, he said.

Parish and school conversion to solar power comes at a time when budgets are tight, partly because of lost jobs and the absence of an in-pew offertory collection as Masses are livestreamed because of the coronavirus pandemic. The utility savings will free money for other priorities, Gravely said.

The solar panels can withstand winds of up to 150 miles per hour and their life expectancy is 30 to 40 years.

He said the school saved $150 in energy cost in the first three days of operation and he expects it will save about $30 per day depending on how sunny it is and how much energy has been banked.

Adopting solar energies is a witness to the community, parish leaders said Gravely, noting that it “shows youth, the next generation which cares about the environment, that churches and schools also care.”

Deacon Fred Allen at the Church of St. Therese said parishioners and people from the greater Chesapeake community have called the parish to praise its commitment of caring for the environment. Some callers also expressed interest in making the switch to solar energy.

St. Pius X pastoral associate Mark Hoggard agrees that the wider use of solar energy speaks to the greater community.

“We are hoping this is something that the parish is proud of and the school kids are proud of too,” Hoggard said. “It really says to the community that we are witnesses to the environment and good stewards of earth.”

Neville writes for The Catholic Virginian, newspaper of the Diocese of Richmond.