Foundation prize is ‘validation’ of all Homeboy Industries does, says priest 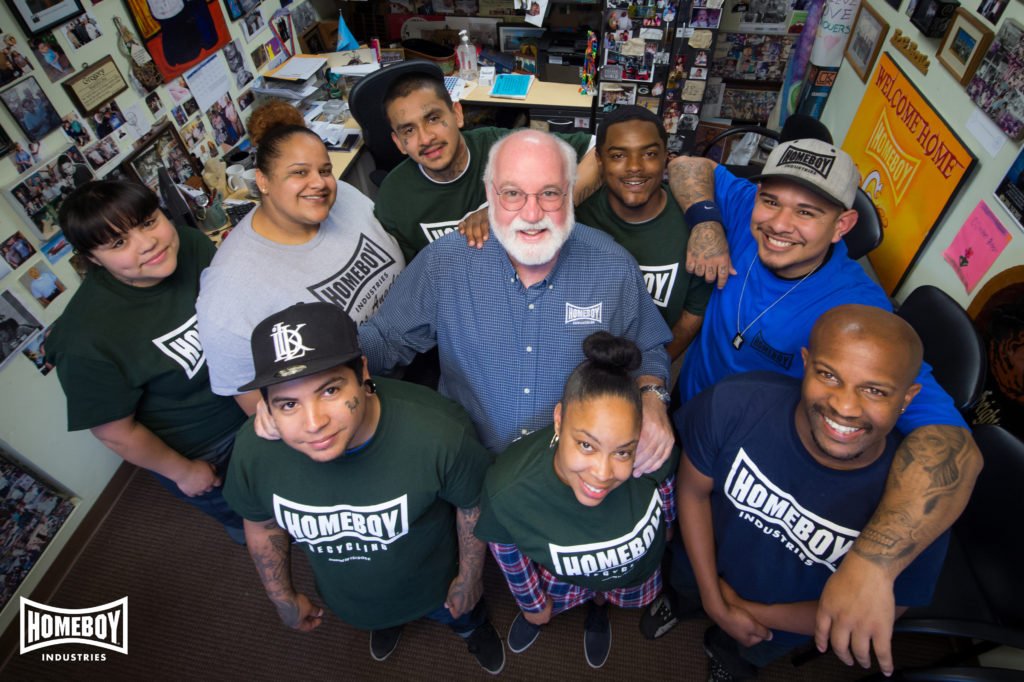 LOS ANGELES (CNS) — For Homeboy Industries to receive the Conrad N. Hilton Foundation’s 2020 Humanitarian Prize is “validation of our work of 32 years,” said Jesuit Father Gregory Boyle, who founded the nonprofit organization with the goal of improving the lives of former gang members in East Los Angeles.

The prize, which is $2.5 million in unrestricted funds, also “strengthens our resolve to create a community of kinship and healing in Los Angeles,” the priest said in a statement. “All of us at Homeboy Industries are profoundly humbled by the Hilton Foundation’s recognition.”

Father Boyle was pastor of Dolores Mission Church when he started Homeboy Industries in 1988. Dolores Mission was the most impoverished Catholic parish in Los Angeles, along with Aliso Village and Pico Gardens, the two largest public housing projects west of the Mississippi. They also had the highest concentration of gang activity in the country.

At that time, law enforcement agencies and the criminal justice system followed policies of arrest and mass incarceration as the main ways they dealt with gang violence.

“Father Boyle saw young people who deserved a chance and has since worked to change the way the world treats those who have been systematically marginalized,” the Conrad N. Hilton Foundation said in announcing the prize Aug. 3.

“Homeboy Industries embodies the spirit of the prize and the work of the foundation — focusing on equity, resilience and dignity — in an inspiring way,” it said.

Homeboy Industries has evolved into the world’s largest gang intervention, rehabilitation and reentry program and is dedicated to providing hope, training and support to individuals. This in turn makes a positive impact in those individuals’ families and communities. It also is now a global network of over 300 organizations.

Its motto is: “Nothing stops a bullet like a job.” It offers counseling and tattoo removal, provides job training and support to formerly gang-involved and previously incarcerated men and women. It has self-development programs in anger management, domestic violence prevention, yoga, spiritual development, parenting, substance abuse, budgeting, art and other areas.

Additionally, it provides employment opportunities in nine social enterprises which it owns and operates, including a bakery, silk-screening and embroidery, a cafe, a diner, farmers markets and electronics recycling.

“This recognition is testament to our wide community of supporters, leaders with lived experience and professionals who all come to walk alongside those on the margins, to make a difference in their lives and our communities,” he said.

NEXT: Storm in Iowa caused $4 billion in damages