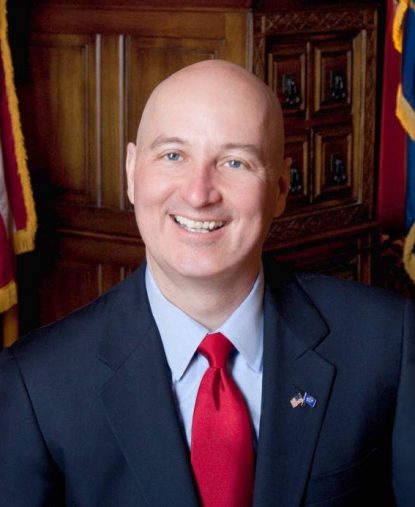 LINCOLN, Neb. (CNS) — Saying Nebraska is “a pro-life state,” Gov. Pete Ricketts Aug. 15 signed into law a ban on dismemberment abortions, which he said stops a “horrific procedure” and is “an important step to strengthen our culture of life.”

The new law, passed by the state Legislature Aug. 13, bans a second-trimester abortion procedure that removes the fetus in pieces. With the ban in place, if this type of abortion is preformed, it will be a felony that comes with a punishment of up to two years in prison and/or a fine of $10,000.

“This brutal procedure has no place in a humane, civilized society,” Ricketts said during the signing ceremony on the steps of the Nebraska Capitol. Several pro-life leaders joined him for the signing, including the main sponsor of the measure, state Sen. Suzanne Geist. The governor thanked her and state lawmakers for “outlawing this barbaric practice in Nebraska.”

When she first introduced the bill, Geist called it “a brutal and unthinkable abortion method “that has no place in modern medicine and is a horrible practice in our society.” Co-sponsors of the measure and Nebraska pro-life leaders called it “gruesome,” “barbaric,” “inhumane” and “immoral.”

Legislative Bill 814 passed by a vote of 33-8 after weeks of what pro-life leaders called political maneuvering by its opponents that almost saw the measure languish in committee and then it nearly failed because of a filibuster Aug. 5. But lawmakers garnered the 34 votes needed to end the filibuster.

“This legislation protects unborn children from the brutality of being torn apart limb by limb,” said Carol Tobias, president of National Right to Life.

Medically, this abortion procedure is called “dilation and evacuation,” involving the dilation of a woman’s cervix and evacuating, or removing, the fetus in pieces. The pro-life movement calls it “dismemberment abortion.” It is used for second-trimester abortions, those done from week 13 through week 24 of a woman’s pregnancy.

Tobias praised Geist, who she said “bravely fought to protect living unborn children from the cruelty of dismemberment abortions in the state of Nebraska,” adding that Nebraska Right to Life and its executive director, Julie Schmit-Albin “worked tirelessly to make this victory possible.”

Planned Parenthood and the American Civil Liberties Union said the ban will endanger women and is an unconstitutional violation of women’s so-called right to abortion.

But according to a news story in the Omaha World-Herald daily newspaper, supporters of the ban said its passage secures Nebraska’s place as a “national leader in the cause for life.” Karen Bowling of the Nebraska Family Alliance was quoted as saying it is “a landmark victory for the pro-life movement.”

Regarding the Arkansas ban, it was one of four abortion laws passed three years ago by Arkansas legislators that were enjoined by Judge Kristine Baker of the U.S. District Court for the Eastern District of Arkansas — until her decision was vacated Aug. 7 by 8th U.S. Circuit Court of Appeals.

In 2017, the Arkansas General Assembly enacted the Arkansas Unborn Child Protection From Dismemberment Abortion Act; the Sex Discrimination by Abortion Prohibition Act; an amendment regarding the disposal of fetal remains; and an amendment concerning forensic samples from abortions performed on a minor.

A three-judge panel of circuit court the laws should be reconsidered in light of the concurring opinion issued by Chief Justice of the United States John Roberts in the Supreme Court’s June 29 ruling in June Medical LLC. v. Russo.

In a 5-4 vote in the case, the court struck down a Louisiana law that required abortion providers to obtain admitting privileges at a hospital near the clinic where they perform abortions. The court said it imposed an “undue burden” on a woman’s right to an abortion.

Roberts sided with the majority but according to court analysts, his separate opinion signaled he is open to a lawsuit challenging Roe v. Wade’s legalization of abortion “on other grounds.”

In 2007, in the U.S. Supreme Court Case Gonzales v. Carhart, the high court held that protecting unborn children from the brutal inhumanity of partial-birth abortion did not impose an unconstitutional “undue burden” on abortion because other methods could be used.

National Right to Life’s Tobias pointed out that the dismemberment ban in 12 states prohibits “one particularly brutal type of abortion — one that tears apart a living unborn child.”

According to Roberts’s opinion, the appropriate inquiry is whether the law poses ‘a substantial obstacle’ or ‘substantial burden, not whether benefits outweighed burdens.'” Based on this new guidance from the Supreme Court, the appeals court panel instructed the lower court to use the correct, “controlling” standard when reviewing the Arkansas dismemberment law.

NEXT: Foundation prize is ‘validation’ of all Homeboy Industries does, says priest