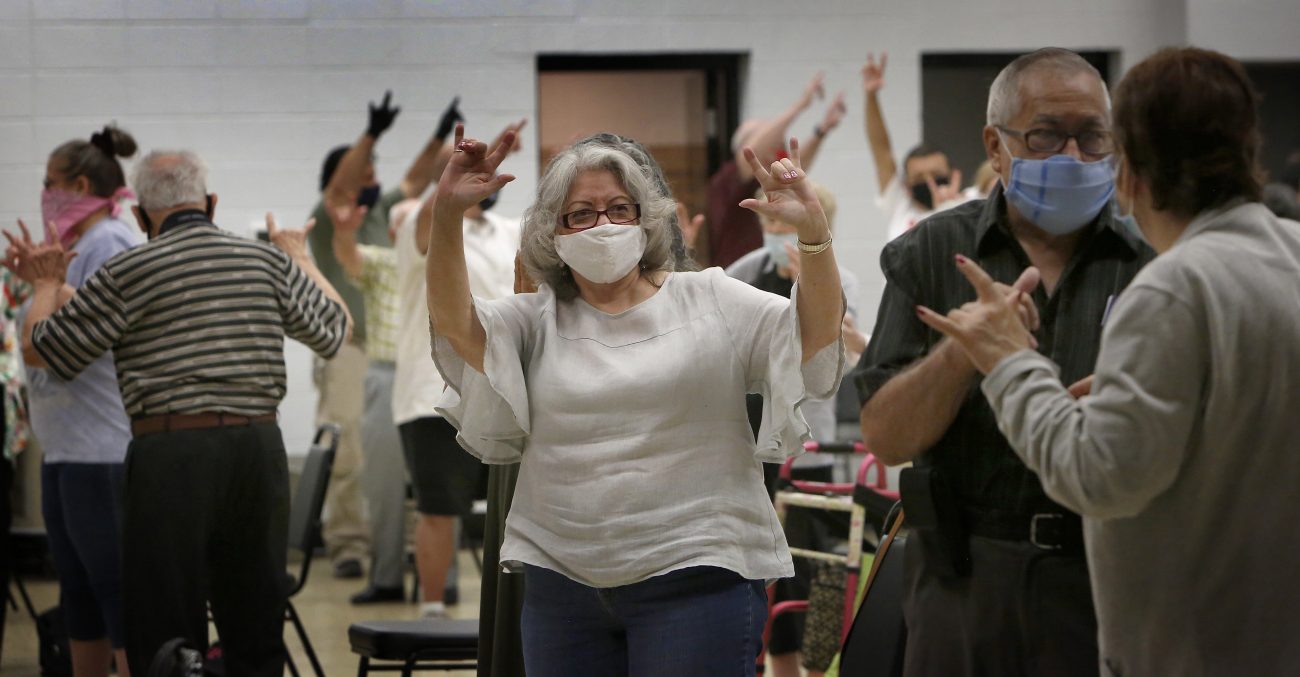 CHICAGO (CNS) — COVID-19 has forced people to adapt to new ways of doing things. For those who are deaf, face masks require extra adjustments.

“All of the deaf face challenges with COVID, especially trying to understand people with masks,” said Susan Rangel, after Mass Aug. 16 at Chicago’s St. Francis Borgia Deaf Center. “It’s a challenge because in the past, half of the face wasn’t covered. Misunderstandings can happen quite frequently and that can cause frustrations with both parties.”

Masks with clear panels over the mouth are not a perfect fix because sign language is communicated using not just the mouth but all of the face along with arms and hands. Because the face is not in full view, just focusing on the mouth can be a distraction, Rangel explained.

“We’re not lip readers. Sure, some people are lip readers, but the full face is what is needed for that full use of language and facial expressions,” she said. “If the full mask were clear then that might help or be more effective.”

Jimmy Smith, who has been attending Mass at the deaf center since 1994, said he is good at reading people’s lips, but masks make that impossible.

“Some people get upset because they start talking to me and I ignore them because even though they are standing right there I don’t know that they are talking to me. Without the mask I could tell,” he said. “It’s hard.”

It’s not just masks that have challenged the deaf during the pandemic, said Father Joe Mulcrone, the center’s director.

“One of the things to understand about the deaf, they already live isolated lives,” he said. “Now, when you knock out all of these other things that used to provide socialization and companionship for them, they’re really left out.”

Technology has been helpful for deaf people who can talk to each other through video apps, but it’s not the same as in person socialization, he said. Before the pandemic, the deaf center would have hospitality before and after Mass and people would stay for hours. That’s not possible right now because of social distancing. The eight centers for the deaf around Chicago are also closed because of the pandemic.

People with disabilities spend their lives adapting, Father Mulcrone said, so in some ways they are better equipped to deal with the changes brought about by the pandemic.

“In that sense, I’ve run into the deaf less complaining about things and feeling sorry for themselves,” he said. “They’ve just been saying, ‘OK, well, I guess we have to do things differently.'”

But the community is happy to be back celebrating Mass together at the center, even if there are restrictions.

“It’s really important for me to be able to see the Mass in my language. The local churches near my home don’t have that language access. There’s nobody to sign the Mass,” said Rangel. “While I have my daughters who can interpret for me, it is still not the same as having the priest up on the altar signing the Mass.”

Mass in American Sign Language allows her to focus solely on the liturgy and not keep moving her eyes back and forth between an interpreter and the priest or other ministers. It makes the celebration of the Eucharist a deeper experience, she said.

Father Mulcrone is not deaf, but his grandparents were, and he grew up speaking to them in sign language. He both signs and speaks the Mass, making it accessible to deaf and hearing people.

Rangel said growing up she didn’t have the opportunity to go to a Mass in sign language. In college, a deaf friend told her about the deaf center, and she couldn’t believe it.

Smith had a similar experience. When attending Masses in English, he would follow along in the missal but once the priest started his homily, Smith zoned out.

“But when I first came here and I saw Father Joe sign the Mass I was like …” he said, dropping his jaw open in astonishment. “I had been going to another church. I told them, ‘I’m leaving here. I found my church.’ I’ve been here since 1993.”

Smith helps Father Mulcrone with tech support and manages the deaf center’s website and social media. He said people all over the world check in on the center’s Facebook page and many deaf people visit the center from out of town or out of state because they want to see how the ministry works.

Every Sunday, the center offers Mass both in spoken English and ASL. The majority of the people who attend Mass at the center were either born deaf or became deaf early in life. There are also families with deaf children who attend Mass.

Bryan Swateck, the head usher at the deaf center, calls it his second home.

“I would love to see all of the deaf people come and be able to socialize with one another and be amongst each other in faith to worship God to help their faith grow,” Swateck said.

For information about the center, visit deafchurchchicago.weconnect.com.

Duriga is editor of the Chicago Catholic, archdiocesan newspaper. 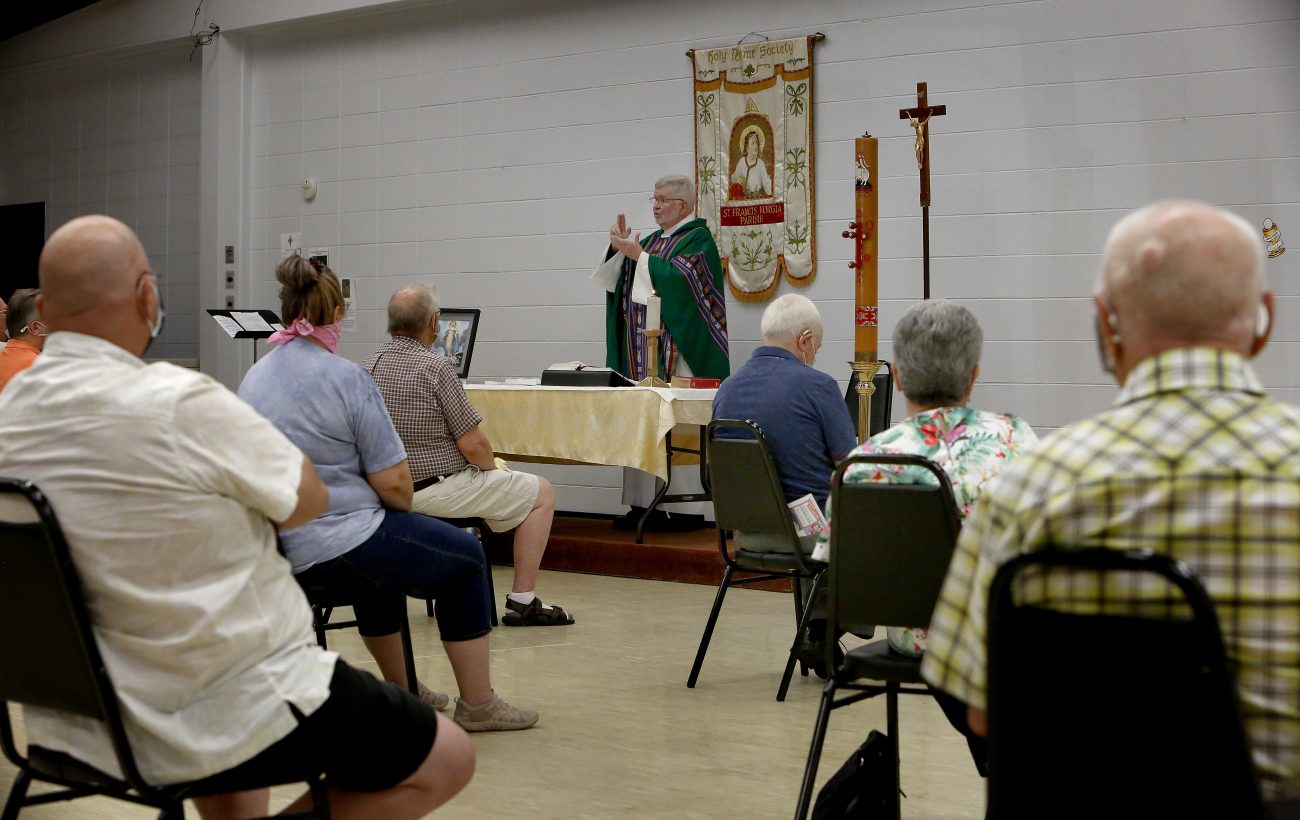