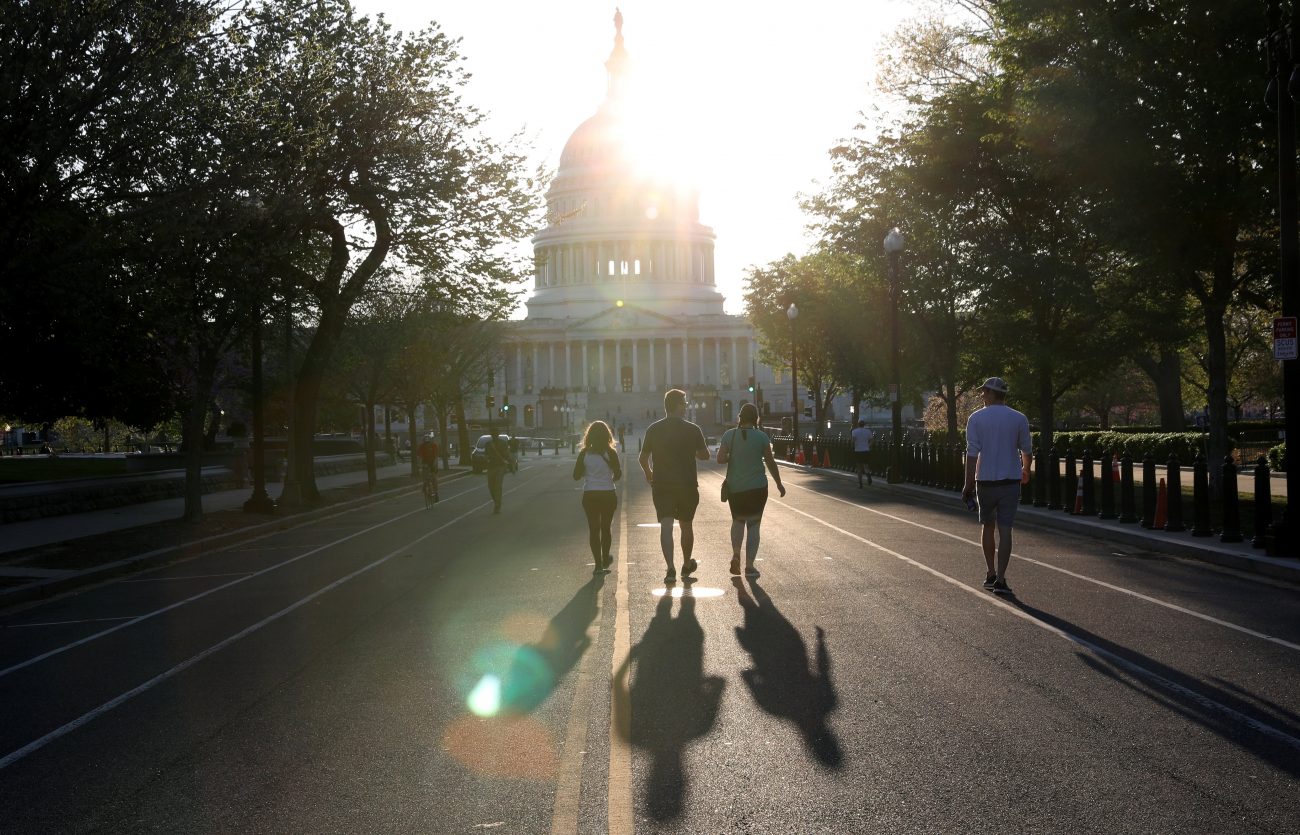 People in Washington walk near Capitol Hill April 6, 2020, during the coronavirus pandemic. The chairman of the U.S. bishops' education committee said Oct. 1 "it is unconscionable" the HEROES Act stimulus bill proposed in the House is excluding Catholic school students and their families. (CNS photo/Leah Millis, Reuters)

WASHINGTON (CNS) — The chairman of the U.S. bishops’ education committee said Oct. 1 “it is unconscionable” the HEROES Act stimulus bill proposed in the House is excluding Catholic school students and their families.

The bill includes $225 billion for education, including $182 billion for K-12 schools, but “provides no equitable services for students in nonpublic schools and maintains language that prohibits any funds from being used to provide financial assistance to nonpublic school children,” said a news release about the measure from the U.S. Conference of Catholic Bishops.

“This has the effect of excluding virtually any aid to students, families and teachers in nonpublic schools,” the release stated.

In his statement, Bishop Michael C. Barber of Oakland, California, chairman of the USCCB’s Committee on Catholic Education, noted the COVID-19 pandemic “has affected all Americans, including those whose children are enrolled in Catholic and nonpublic schools.”

“It is unconscionable that this latest aid proposal would exclude these American children and the schools they attend from emergency aid that would ease the financial burdens they have borne as a result of the pandemic,” he said.

Democratic lawmakers have introduced a revised HEROES Act measure ahead of negotiations with Treasury Secretary Steven Mnuchin. HEROES Act stands for Health and Economic Recovery Omnibus Emergency Solutions Act. The proposed package is $1.2 trillion less than the Democrats’ original $3.4 trillion bill that the House passed in May.

Senate Republicans balked at the earlier legislation, calling it too expansive and mostly aimed at bailing out state and city governments. Democrats in the Senate blocked a slimmed down $300 billion Republican relief measure in early September.

Bishop Barber said Oct. 1 the “economic devastation” in this country wrought by the pandemic “has already led to the closure of at least 150 Catholic schools, many in low-income areas that serve children of color.

“Congress and the White House must come together to support emergency aid that prioritizes the health and safety of all students, including nonpublic school children and the nearly 2 million students enrolled in Catholic schools,” he said.

The bishop said the USCCB “supports robust education aid for all students and has asked the Congress to include the bipartisan School Choice Now proposal in any COVID aid package.”

For weeks, U.S. Catholic bishops and other Catholic leaders have been pressing congressional negotiators to include financial support for families to continue to send their children to Catholic and nonpublic schools in any coronavirus relief bill.

The pandemic-induced recession has “made it impossible for many struggling families to continue paying tuition,” five cardinals, an archbishop and Bishop Barber, as education chairman, said in an Aug. 5 letter to the Republican and Democratic leadership in the House and Senate.

The letter implored lawmakers to provide “robust” assistance “to ensure that the education needs of all children are met, including children in Catholic and other nonpublic schools.”

In an Aug. 6 letter to Rep. Karen Bass, D-California, chairwoman of the Congressional Black Caucus, Bishop Barber and the chairmen of two other USCCB committees made the same appeal for families who have their children enrolled in Catholic and other nonpublic schools in low-income communities.

They said that because the pandemic has “disproportionately affected” predominately Black communities and the Catholic schools that serve them, Congress must provide immediate financial help to families who have chosen these schools for their children’s education.

They asked for Congress to designate emergency funding for direct scholarship aid to low- and middle-income families with children in Catholic schools and other nonpublic schools.

“Catholic schools are facing a crisis at this very moment,” the three bishops said, noting, at that point, “over 130 schools have already announced permanent closure, including schools in Chicago, Philadelphia, Baltimore, Boston, New Jersey and New York.

“These closures are disproportionately harmful to low-income and Black children who are educated in urban schools,” they said.

On July 29, Cardinal Dolan, Cardinal O’Malley and Archbishop Gomez appealed to President Donald Trump as well as to Congress for economic relief for students in Catholic and other nonpublic schools and their families. Their request came in a commentary for the National Catholic Register.

PREVIOUS: Catholics say for civility to prevail, the common good must be served

NEXT: Rockville Centre bishop says decision to file for bankruptcy ‘not made lightly’