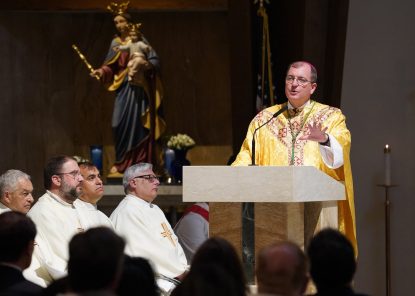 ROCKVILLE CENTRE, N.Y. (CNS) — Facing over 200 lawsuits alleging sex abuse filed since New York state lifted the statute of limitations on such cases, the Diocese of Rockville Centre Oct. 1 filed “a voluntary petition for reorganization” under Chapter 11 of the U.S. Bankruptcy Code.

The petition was filed in U.S. Bankruptcy Court for the Southern District of New York.

“We believe that this process offers the only way to ensure a fair and equitable outcome for everyone involved, including abuse survivors whose compensation settlements will be resolved by the courts,” said Bishop John O. Barres said in a statement.

“This decision was not made lightly,” he said, “but, with the passage of the Child Victims Act, the failure of the diocese’s insurers to honor their contractual obligations and the number of suits filed to date, it has become clear the diocese would not able to continue its spiritual, charitable and educational missions while shouldering the increasingly heavy burden of litigation expenses associated with these cases.”

Last year, Gov. Andrew Cuomo signed the Child Victims Act to lift the statute of limitations on filing childhood sex abuse cases that previously had been “time-barred or expired.” The new law gave survivors a year to file, but Cuomo has twice extended the deadline because of difficulties posed by the ongoing pandemic, he said. On May 8, he extended the deadline to Jan. 14, 2021, and on Aug. 3, he extended it further to Aug. 14, 2021.

Regarding the bankruptcy filing, “we know that this will be difficult news for people across the diocese to hear, especially for the many people of Long Island, Catholic and non-Catholic alike, who depend on the church in so many ways,” Bishop Barres said in a 10-minute video posted on the diocese’s website, www.drvc.org.

The financial burden of litigation expenses “has been severe” and has “only been compounded” by the financial toll of COVID-19 on the diocese, he said.

The bankruptcy will allow the diocese to still carry out its “spiritual, charitable and educational missions,” Bishop Barres said, while at the same time “make sure all clergy sex abuse survivors are afforded just and equitable compensation” and “offer survivors some measure of healing from these horrific abuses.”

The news release, and Bishop Barres in his video message, said the diocese “believes its current and future liquidity will be sufficient to fund operations and ministries during the restructuring process and beyond.”

“Vendors will be paid for all goods and services delivered after the filing, and transactions that occur in the ordinary course of business will continue as before. Employees will be paid their normal wages, and their benefit programs will continue uninterrupted,” the release said.

The diocese said its parishes and Catholic schools are separate legal entities and therefore are not included in the filing. “Operations of the parishes and schools are expected to continue as normal,” it said.

Some parishes are named in Child Victims Act lawsuits along with the diocese, and Bishop Barres said the diocese “intends to petition the Bankruptcy Court to stay any separate civil actions against these parishes and bring these cases under the umbrella of the settlement process in the diocese’s Chapter 11 case.”

“We carefully and prayerfully considered other alternatives, but Chapter 11 was the only way to provide fair settlements to survivors while continuing to be of service to the 1.4 million Catholics in the geographical boundaries of the Diocese of Rockville Centre,” Bishop Barres said in his message.

The diocese began implementing cost reductions and streamlining its operations in October 2019, a move expected to save the diocese about $3.5 million annually.

“Like many other institutions, the diocese has suffered a strain on its finances as a result of the COVID-19 pandemic. Approximately 40% of its annual revenue comes from offertory collections, which have dropped precipitously (along) with attendance at Sunday Mass,” the news release said.

This past August, the diocese cut its budget and reduced staff by 10% at the pastoral center in Rockville Centre, cuts it said will save about $5 million annually.

“We will work diligently with all survivors, creditors and ministries to maintain open communication while we work toward our goal of completing a settlement and finalizing a restructuring plan that includes a comprehensive and final resolution for suffering survivors,” the diocese said.

The office also ensures the protection and safety of children by enforcing protocols for reporting and investigating alleged incidents of abuse.

In 2017, the diocese launched its Independent Reconciliation and Compensation Program to provide abuse survivors “a confidential avenue for being heard” and provide “some measure of reconciliation and compensation based on an independent review by nationally recognized fund administrators.”

The program ended with the Chapter 11 filing, the diocese said, but since it was instituted, it had provided varying amounts of compensation to about 350 survivors totaling more than $62 million.

“Participation in the IRCP had been completely voluntary,” the diocese said.

NEXT: San Francisco’s new indoor worship limit a ‘victory,’ but effort not over