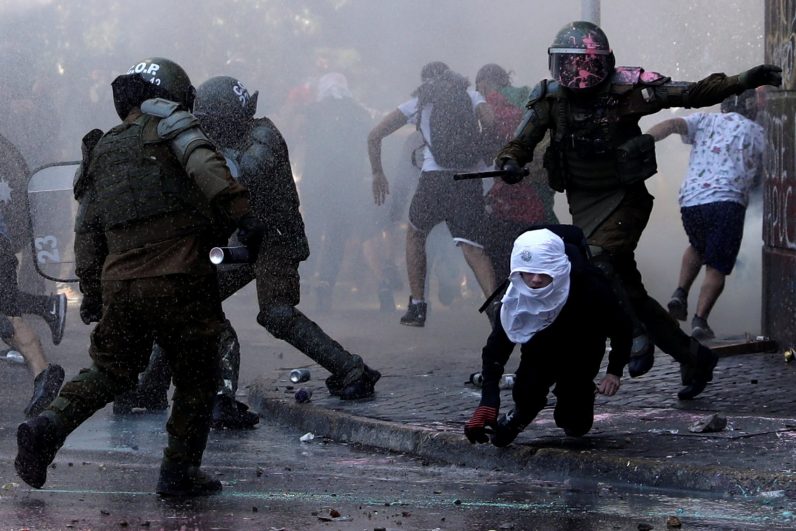 Demonstrators and riot police clash during a protest against Chile’s government in Santiago Oct. 18, 2020, the one-year anniversary of the protests and riots that rocked the capital. The demonstrations occurred a week before a referendum on whether to ditch a dictatorship-era constitution. (CNS photo/Ivan Alvarado, Reuters)

Church officials and media reports described the Oct. 18 gatherings through the country as peaceful, but unrest broke out late in the day, with some protesters entering and vandalizing parishes in Santiago, the national capital.

Videos posted on social media showed the spire of Our Lady of the Assumption Church in Santiago burning, then crashing to the ground as a nearby crowd cheered.

St. Francis Borgia Church also was vandalized, and religious items were removed, church official said. The parish is home to institutional ceremonies for the “Carabineros,” Chile’s national police, a force unpopular with protesters over accusations of it employing repressive tactics, including 345 eye injuries from the use of pellets shot from anti-riot weapons, according to a U.N. report.

“These events over the past few hours in Santiago and other cities in Chile show that there are no limits to those that exacerbate violence,” the Chilean bishops’ conference said in an Oct. 18 statement.

“These violent groups contrast with many others who have demonstrated peacefully. The vast majority of Chile yearns for justice and effective measures that help to overcome inequality. They do not want more corruption or abuse; they expect dignified, respectful and fair treatment.”

Archbishop Celestino Aós Braco of Santiago called for an end to the violence Oct. 18, calling it evil and saying, “We cannot justify the unjustifiable.”

Chile erupted in protests in October 2019 after an increase in metro fares in the city of Santiago. But the small fare increase belied much deeper dissatisfaction with economic inequality in the country, which had been promoted in recent decades as a development success story with pro-market policies.

Chileans go to the polls Oct. 25 in a referendum on whether to rewrite the nation’s constitution, which was drafted during the 1973-1990 regime of Gen. Augusto Pinochet.

Many of the protests have demanded rewriting the constitution; the bishops have encouraged citizen participation in the demonstrations.

“The citizenry that wants justice, probity, the overcoming of inequalities and opportunities to be able to pull ourselves up as a country will not be intimidated by threats of violence and will fulfill their civic duty,” the bishops’ statement said. “In democracies, we express ourselves with free votes of conscience, not the pressures of terror and force.”

The assailing of two parishes comes as Chile’s Catholic Church suffers the fallout from accusations of clergy sexual abuse and the hierarchy’s improper response to such crimes. A January survey from polling firm Cadem found that 75% of respondents disapprove of the church’s performance. 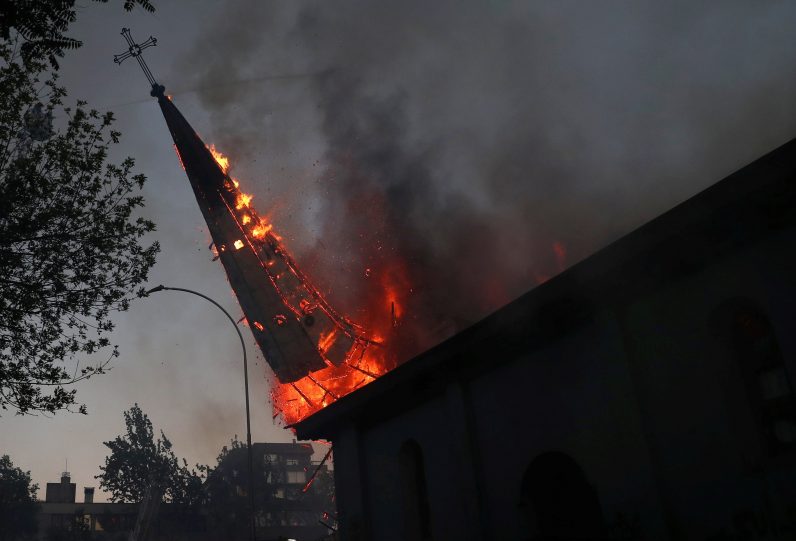 A church spire collapses after demonstrators set it on fire during a protest against Chile’s government in Santiago Oct. 18, 2020, the one-year anniversary of the protests and riots that rocked the capital. The demonstrations occurred a week before a referendum on whether to ditch a dictatorship-era constitution. (CNS photo/Ivan Alvarado, Reuters)

NEXT: Church in Vietnam struggles to help those affected by major floods