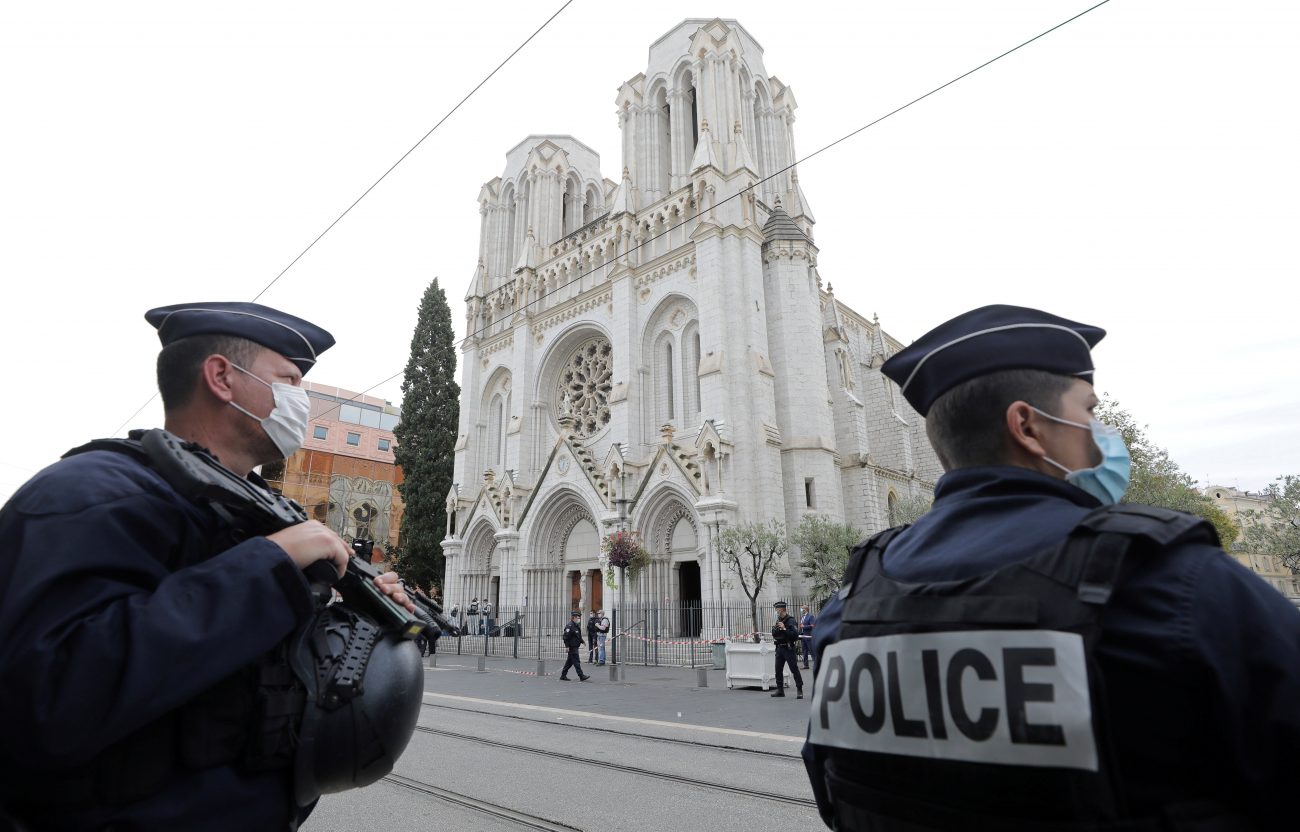 Police stand near Notre Dame Basilica in Nice, France, Oct. 29, 2020, after at least three people were killed in a series of stabbings before Mass. France raised its alert level to maximum after the attack. (CNS photo/Eric Gaillard, pool via Reuters)

MANCHESTER, England (CNS) — French bishops ordered a “death knell” to ring from every church of their country Oct. 29 after three people were hacked to death in a basilica in the southern Mediterranean city of Nice.

Churches were asked to chime their bells at 3 p.m. in an act of mourning for three people who were killed in Nice’s Notre Dame Basilica while preparing for morning Mass.

Pope Francis sent a tweet expressing closeness to the people of Nice. “I pray for the victims, for their families and for the beloved French people, that they may respond to evil with good,” it said.

Cardinal Pietro Parolin, Vatican secretary of state, sent a similar message from Pope Francis in a telegram to Bishop André Marceau of Nice. “Entrusting France to the protection of Our Lady,” Pope Francis “wholeheartedly gives his apostolic blessing to all those affected by this tragedy,” the telegram added.

The French Council of Muslim Worship condemned the killings and asked Muslims to express their “mourning and solidarity with the victims and their relatives” by canceling all celebrations of the birthday of Muhammad, which this year is marked by Sunni Muslims Oct. 29.

According to French media, the victims included a 70-year-old woman whose body was found by police “almost beheaded” beside a holy water font.

A 45-year-old sacristan identified only as Vincent L. also was found dead in the basilica, with unconfirmed reports saying his throat was cut.

A second woman, described as African in origin and in her 30s, fled the church after she was stabbed, but died in the nearby cafe where she had sought refuge. 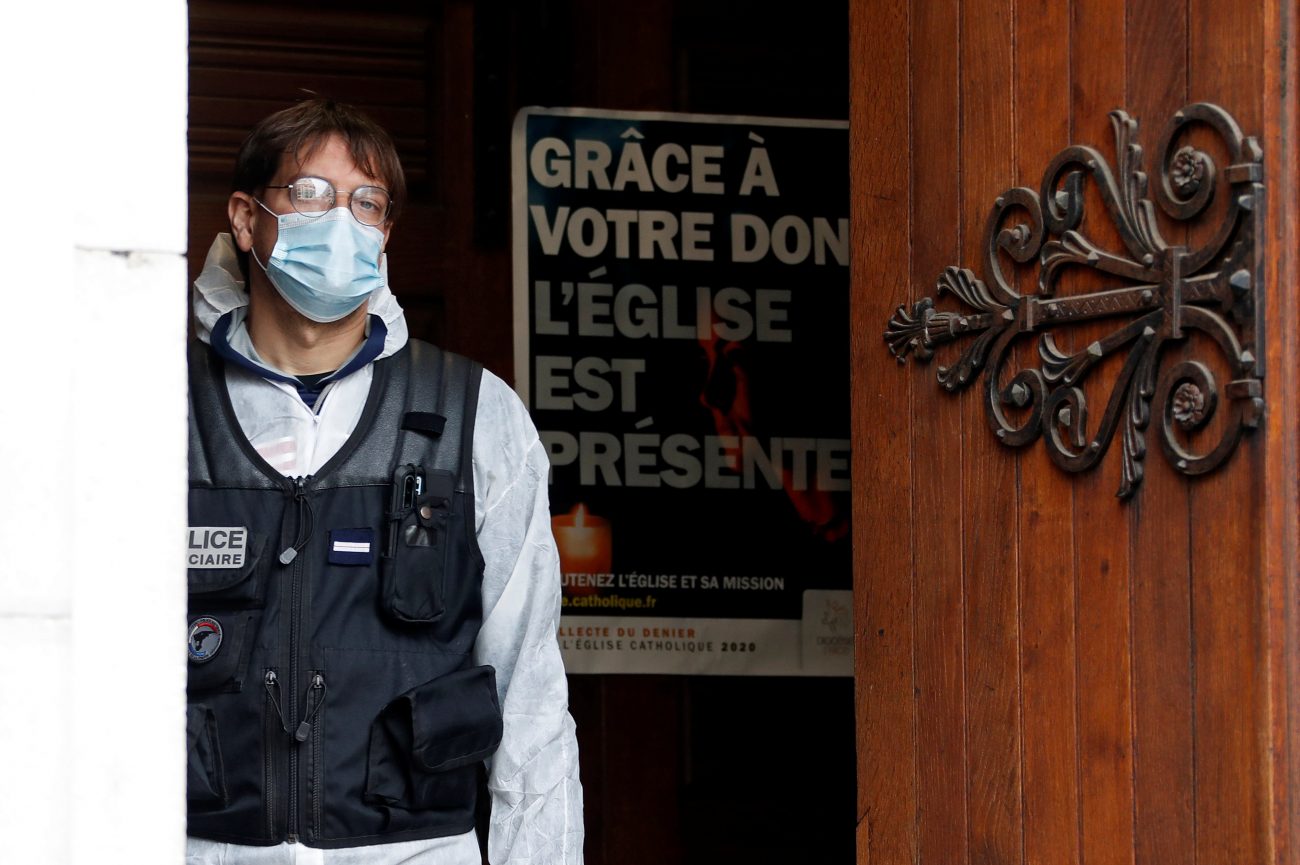 A police officer guards the door of Notre Dame Basilica in Nice, France, Oct. 29, 2020, after at least three people were killed in a series of stabbings before Mass. France raised its alert level to maximum after the attack. (CNS photo/Eric Gaillard, pool via Reuters)

Police shot and wounded a man in his 20s who was suspected of the attack, and he was arrested and taken to hospital for treatment.

According to Le Figaro, a French newspaper, the man declared his name to be “Brahim” and told officers that he had acted alone. His fingerprints were taken to help detectives to confirm his identity.

Nice Mayor Christian Estrosi said the attacker “kept shouting Allahu akbar (Arabic for God is great) even after being medicated.” The mayor said “the meaning of his gesture is not in doubt.”

“Enough is enough,” he told journalists. “It’s time now for France to exonerate itself from the laws of peace in order to definitively wipe out Islamo-fascism from our territory.”

French police have confirmed they are treating the killings as a terrorist incident.

It comes amid mounting anger of Muslims at President Emmanuel Macron’s defense of satirical cartoons of Muhammad, the founder of Islam.

Two hours after the attack, police shot dead a man who was brandishing a handgun and shouting “Allahu akbar” in the southern city of Avignon. The same day, a guard at the French consulate in Jeddah, Saudi Arabia, was stabbed by a 40-year-old attacker, who was then apprehended.

The French bishops said in a statement they had been plunged into “immense sadness.”

“Our thoughts and prayers are with the victims, the injured, their families and loved ones,” the statement said. “It was because they were in the basilica that these people were attacked, murdered. They represented a symbol to be destroyed.”

The bishops said the attack reminded them of “the martyrdom” of Father Jacques Hamel, a priest hacked to death in his Normandy church by Islamic militants in 2016.

“Through these horrific acts, our entire country is affected,” they said in the statement. “This terrorism aims to instill anxiety throughout our society. It is urgent that this gangrene be stopped, as it is urgent that we find the indispensable fraternity which will hold us all upright in the face of these threats.

“Despite the pain gripping them, Catholics refuse to give in to fear and, with the whole nation, want to face this treacherous and blind threat,” the bishops added.

Bishop Marceau responded to the attack by ordering the instant closure of all of the churches in the city and declaring them to be under police protection.

“All my prayers go out to the victims, their loved ones, the law enforcement agencies on the front lines of this tragedy, priests and faithful wounded in their faith and hope,” said Bishop Marceau. “May Christ’s spirit of forgiveness prevail in the face of these barbaric acts.”

He said the dead were “victims of a heinous terrorist act” that followed “the savage murder of Professor Samuel Paty,” a Paris teacher who was beheaded Oct. 16 by a Muslim migrant after he showed satirical cartoons of Muhammad to school children in a lesson about free speech.

The cartoons were first published in 2012 in Charlie Hebdo, a magazine that has since been the target of three terrorist attacks, one of which in 2015 claimed the lives of 12 staff members.

At the Vatican, Guinean Cardinal Robert Sarah, prefect of the Congregation for Divine Worship and the Sacraments, tweeted in solidarity with the French church, saying extremism “must be fought with strength and determination.”

He said persecuted African Christians understood “too well” that violent Islamists would not give up their struggle.

The attack in Nice took place less than half a mile from the scene of the July 14 Bastille Day massacre of 2016, when a man plowed a truck into a crowd on the Promenade des Anglais, killing 86 people and injuring more than 400.

French politicians held a minute’s silence ahead of a debate on new coronavirus restrictions, and Macron presided over an emergency Cabinet meeting about the attacks before leaving for Nice.

PREVIOUS: Pope to celebrate private Mass for All Souls at Vatican cemetery