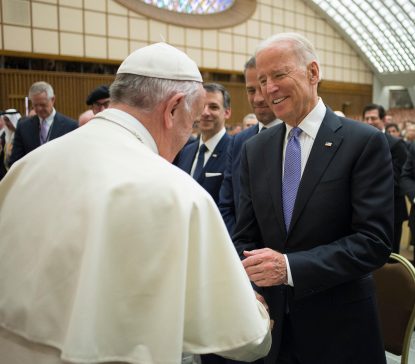 Pope Francis greets U.S. Vice President Joe Biden after both spoke at a conference on adult stem-cell research at the Vatican in this April 29, 2016, file photo. (CNS photo/L’Osservatore Romano)

“The president-elect thanked His Holiness for extending blessings and congratulations and noted his appreciation for His Holiness’s leadership in promoting peace, reconciliation and the common bonds of humanity around the world,” said a readout on the call released by Biden’s transition team in Wilmington. It also appeared widely on Twitter.

Biden, the readout said, “expressed his desire to work together on the basis of a shared belief in the dignity and equality of all humankind on issues such as caring for the marginalized and the poor, addressing the crisis of climate change, and welcoming and integrating immigrants and refugees into our communities.”

Biden will be the nation’s second Catholic president, after John F. Kennedy, who was elected to the nation’s highest office 60 years ago, on Nov. 8, 1960.

On Nov. 7, the media declared Biden the winner of the Nov. 3 election, but President Donald Trump has not conceded, and he and his campaign have filed several lawsuits in key battleground states, like Pennsylvania, disputing the election outcome, claiming voter fraud and irregularities in ballot counting.

While votes are still being counted, Biden has garnered 290 electoral votes while Trump has 217 electoral votes. It takes 270 votes to win the presidency.

In the meantime, Biden and Vice President-elect Kamala Harris are working with their transition team.

Biden first met Pope Francis in 2013 as vice president, serving with President Barack Obama. In 2015, Biden and Obama welcomed Pope Francis to Washington, where he addressed a joint meeting of Congress Sept. 24 of that year.

While he was on the campaign trail for the 2020 presidential race, Biden invoked Pope Francis and quoted his encyclical, “Fratelli Tutti, on Fraternity and Social Friendship,” released Oct. 4 by the Vatican.

“Political life,” the pope wrote, “no longer has to do with healthy debates about long-term plans to improve people’s lives and to advance the common good, but only with slick marketing techniques primarily aimed at discrediting others. In this craven exchange of charges and countercharges, debate degenerates into a permanent state of disagreement and confrontation.”

Pope Francis urged Christians and all people of goodwill to recognize the equal dignity of all people and to work together to build a world where people love and care for one another as brothers and sisters.

Building that world, he said in the encyclical, requires “encounter and dialogue,” processes that allow people to speak from their experience and culture, to listen to one another, learn from one another and find ways to work together for the common good.

In a campaign speech in Warm Springs, Georgia, Oct. 27, Biden talked about the need to heal the nation as the country faces the pandemic and an economic crisis.

“Pope Francis warns us against this phony populism that appeals to the basest and most selfish instinct. He goes on to say politics is more noble than posturing, marketing and media spin. These sow nothing but division, conflict and bleak cynicism,” Biden said in his remarks.

“He said for those who seek to lead, we do well to ask ourselves why am I doing this? Why? What is my real aim? Pope Francis asked questions that anyone who seeks to lead this great nation should be able to answer. And my answer is this: I run to unite this nation and to heal this nation,” he said.