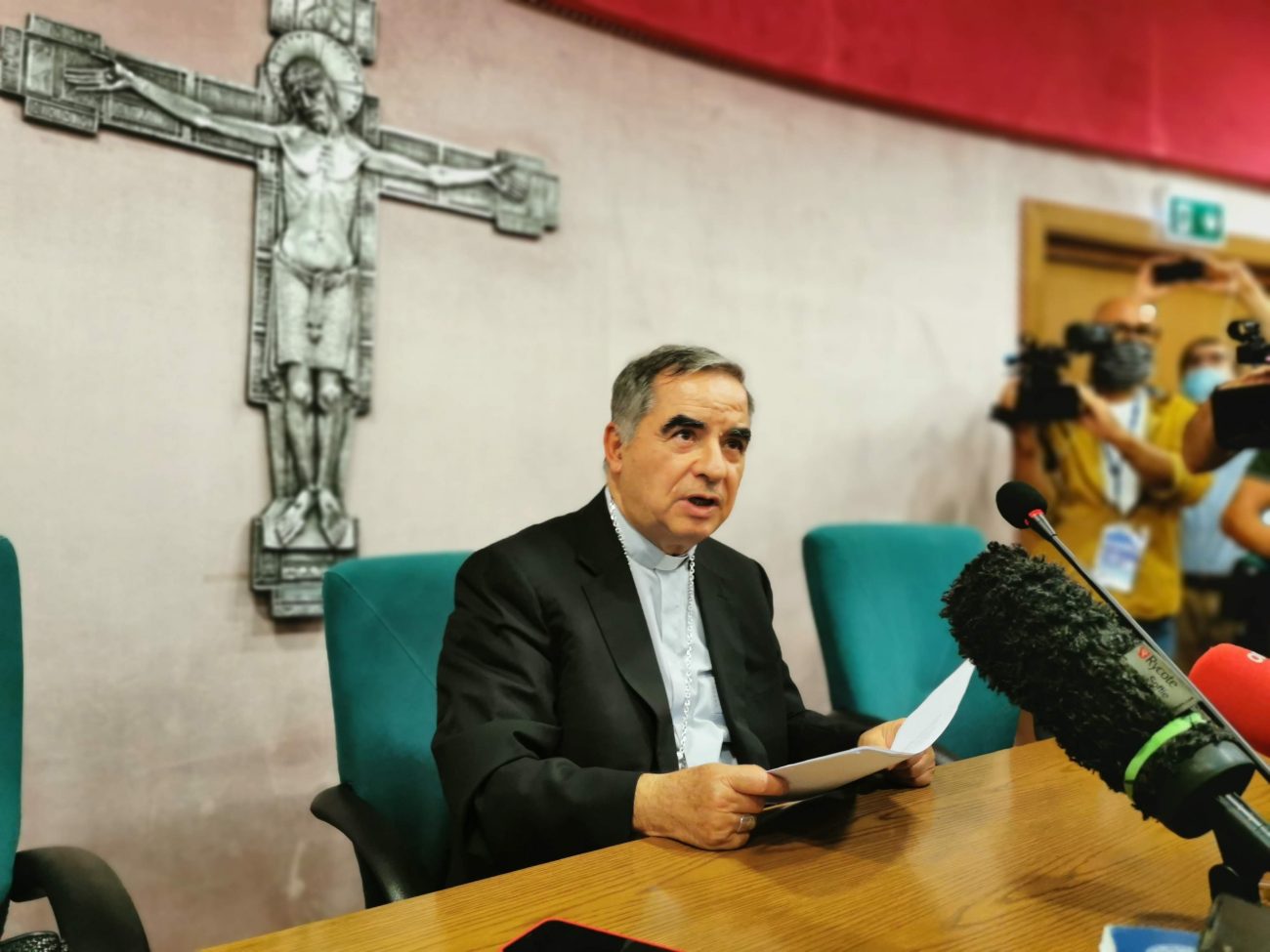 Cardinal Angelo Becciu speaks with journalists during a news conference in Rome Sept. 25, 2020, after he was asked by Pope Francis to resign as prefect of the Congregation for Saints' Causes and renounce the rights associated with being a cardinal. (CNS photo/Junno Arocho Esteves)

VATICAN CITY (CNS) — Cardinal Angelo Becciu, who was forced to resign due to allegations of financial malfeasance, filed a lawsuit against an Italian magazine, claiming it ruined his reputation, which resulted in him losing his chance at becoming pope.

According to Italian news agency Adnkronos, the 74-page lawsuit claimed that the “slanderous and defamatory” reporting of L’Espresso influenced Pope Francis’ decision to remove Cardinal Becciu.

“On the basis of his prestigious curriculum and in virtue of the aforementioned past, (Cardinal Becciu) could well have been among the ‘papabili,'” or the front-runners for the papal election, the suit claimed, according to Adnkronos’ Nov. 19 report.

Cardinal Becciu filed the lawsuit Nov. 18 in Sardinia and is suing L’Espresso for 10 million euros ($11.8 million), which his lawyers said would be donated to charity.

The former prefect of the Congregation for Saints’ Causes was forced to offer his resignation to the pope Sept. 24. According to Cardinal Becciu, he is accused of embezzling an estimated 100,000 euros ($116,361) of Vatican funds and redirecting them to Spes, a Caritas organization run by his brother, Tonino Becciu, in his home Diocese of Ozieri.

Pope Francis signed a new set of laws in June to prevent fraud and corruption, including barring Vatican employees from awarding contracts to their relatives for the purchase of goods, property and services.

The cardinal’s name had also turned up in a questionable property development deal in London’s Chelsea district, which was extensively covered by L’Espresso.

Cardinal Becciu, who had to renounce the rights and privileges of being a cardinal, strongly denied any wrongdoing during a news conference Sept. 25 and said that although he received no formal notification from authorities that he was under investigation or being charged with a crime, he hopes to clear his name. He also said he would possibly take news agencies to court for defamation.

According to the lawsuit, on the day Cardinal Becciu was forced to resign, the pope had an advanced copy of L’Espresso’s report on the accusations against him, suggesting their “defamatory” reporting influenced his decision.

The lawsuit, Adnkronos reported, also claims that the Italian cardinal’s exclusion from the next conclave “could challenge the validity of the election of the Holy Father, with all the doctrinal implications that could occur as a result, as well as the division within the church that could be generated.”

It also stated that the chaos potentially created by his exclusion would result in “the convening of a second conclave” that would cause “serious financial problems” since “it is a very costly procedure for the Holy See.”

The lawsuit also called L’Espresso’s reporting a “deplorable operation of ‘death by media'” that aimed to destroy his reputation as well as his relationship with Pope Francis, which up until Sept. 24 was “excellent.”

In an editorial published Nov. 18, Marco Damiliano, editor-in-chief of L’Espresso, defended the news magazine’s reporting and questioned Cardinal Becciu’s accusation that the magazine is at fault for ruining his reputation.

“There is a departure in logic in this reasoning: If the cardinal possesses a curriculum and such a pristine image as meticulously reported in his lawyer’s document, why would Pope Francis choose to believe a journalistic investigation and not (Cardinal Becciu)?” Damiliano asked.

He also said the amount of money the magazine is being sued for as well as Cardinal Becciu’s accusation that the reports cost him the papacy “reveal his ambitions.”

“L’Espresso is accused not only of influencing the current pope but also the Holy Spirit, who could have chosen (Cardinal) Becciu as his successor were it not for an article to block his ascent,” Damiliano wrote.

“For the first time, the price of the throne of St. Peter has been determined: 10 million euros,” he said.