The pandemic is “not only affecting the population’s health, but disrupting all dimensions of existence,” said a report to the Nov. 16-20 Spanish bishops’ conference plenary.

“Nothing has been immune from the pandemic, which has accelerated and intensified existing social processes and created huge uncertainties for any life ethic. … The economy has collapsed due to unemployment and the need to paralyze the production system.”

The report, by the bishops’ social-pastoral commission, drew on data from several Catholic organizations, including the charitable aid agency Caritas and Justice and Peace, which groups European justice and peace commissions.

The report said social and political conditions were changing profoundly under the impact of the coronavirus, as states of emergency and other mechanisms became a feature of Spain’s already “precarious democracy,” and as curbed rights, increased inequality and moral disengagement inflicted “a deep wound on society.”

“It is necessary to continue listening to the voice of God in contemplating the marginalization and poverty now affecting so many,” said the report.

COVID-19 infections spiked in Spain this autumn, surpassing 1.5 million by Nov. 17, with 41,700 deaths recorded so far during 2020, according to the Health Ministry.

The church report said 8.5 million people, almost a fifth of the population, had faced exclusion before COVID-19, which had since deepened disaffection as rising unemployment and drastic income cuts left many families suffering “a total lack of social and legal protection.”

It added that Spain’s tourism, hospitality and service industries had been worst hit, fueling a housing and health care crisis, with 57% of households citing worsened physical or “psycho-emotional” health problems.

“The pandemic has aggravated the situation, exposing the ruptures in our society, the precarious social structure, deep inequality, lack of opportunity, insufficient social protection and a weakened community,” the report said.

It said Caritas Spain had cited a 57% increase in requests for aid during the pandemic. It said migrants and asylum-seekers had been “condemned to the underground economy” and now faced “exploitation and situations of semi-slavery.” The report also said hardships faced by prisoners, trafficking victims, Roma and the homeless had encountered a lack of official response.

In Germany, diocesan incomes are forecast to fall by around a tenth, twice the loss of the 2008-09 financial crisis, reducing the aid output of the Catholic Church, which received $8 billion in revenues during 2019, according to the Welt am Sonntag weekly Nov. 15.

In neighboring France, where a national online collection system was introduced by the church during the pandemic, a bishops’ conference official told the Ouest-France daily Nov. 13 a deficit of nearly $119 million was expected by year’s end, leaving the country’s 97 dioceses and 12,000 parishes dependent on Sunday donations.

Caritas France reported Nov. 12 that 8 million people, 12% of the population, now had “insufficient means to live” and urged the government to allow those without personal savings to continue working during the pandemic.

Bishops in England and Wales also recalled the “practical support” given by parishes through food banks and social initiatives and said in a Nov. 4 statement the new ban on public worship demonstrated “a fundamental lack of understanding of the essential contribution made by faith communities to well-being, resilience and health.”

In a Nov. 10 address to the 57-country Organization for Security and Cooperation in Europe, the Vatican’s representative, Msgr. Janusz Urbanczyk, said current lockdowns across Europe had “profound consequences” for religious freedom, but had also “limited the religious, educational and charitable activities of religious communities.” 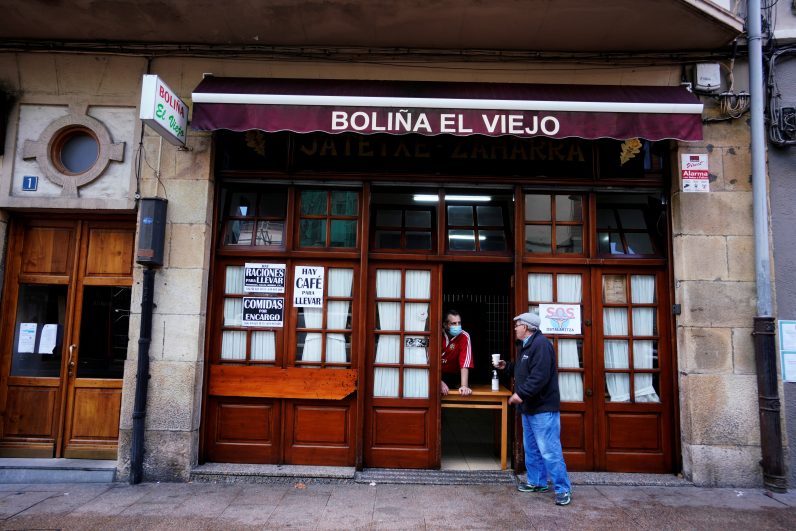 A customer is served a coffee at a bar in Guernica, Spain, Nov. 20, 2020, after the Basque regional government ordered the closure of bars and restaurants, while allowing carryout food and drink, during the coronavirus pandemic. (CNS photo/Vincent West, Reuters)

NEXT: Pope tells young economists, entrepreneurs they must make a difference